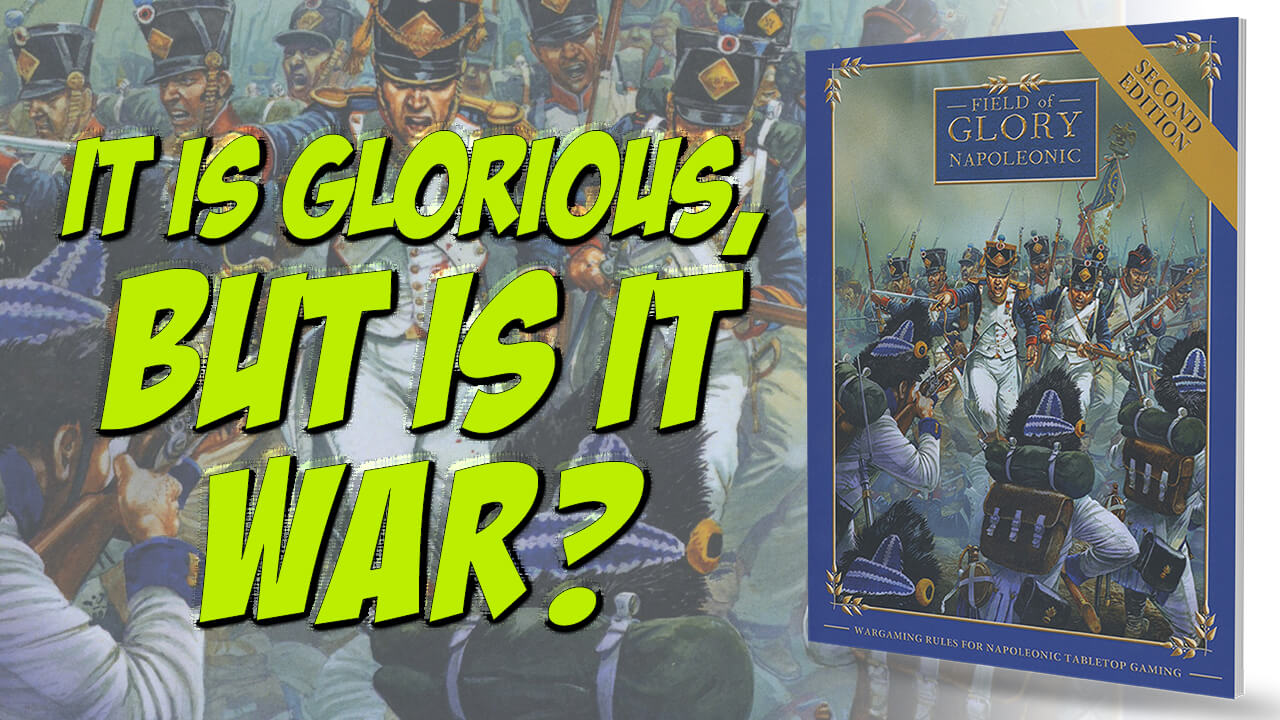 Field of Glory: Napoleonic (2nd Edition) is the latest version of the previously published rules systems from. This is a 153-page softback book aimed at those who like to field a fair few figures but keep the tabletop battle manageable.

The rules begin with a helpful guide to the equipment needed, miniatures, basing, measurements and markers. There is also a brief but concise history of the Napoleonic Wars. The rules are designed to cover various sizes of figures, from 5mm right the way up to 28mm.  Exact base sizes and the numbers of figure per base are also covered. The system uses six-sided dice, preferably of at least two different colours and a system of Movement Units, adjusted for figure sizes and perhaps most akin to Base Widths.

The rules themselves begin by analyzing the Troop Types and Weapons used in the game, plus the basic formations for a unit. The set up of Points Based games is covered, including types of games, terrain placement, and the deployment of Units and Commanders. The basic Turn Sequence is outlined, with some useful description.

An important aspect of the rules is the role of Commanders and Command Points. These are the main driving force behind the combat action, with the Skill Level of the commander deciding how many command points may be gathered and used by allocating them to the relevant level of command, whether Division, Brigade or Corps level.

Assault and Movement is dealt with next, using plenty of examples, often using colour pictures. Players can charge, counter-charge, conduct defensive fire and more. Movement covers every aspect, from moving up reserves to dealing with terrain, formation changes, moving in squares and pretty much every possible action carried out during the Napoleonic Era.

Firing and Combat have a whole range of options, largely resolved by cross referencing some very clearly laid out tables and with numerous but easy to apply modifiers. A nice touch is the effects of weather on firing, and gaining support in Combat from friendly units nearby. Again, the attention to detail in trying to simulate the Era is well done.

After all that Firing and Combat, the Outcome for a unit must be resolved, with retirements  being likely, and Pursuit being highly desirable. Of course, having retreated or following up an attack, even the most disciplined troops will lack Cohesion or be in need of Recovery. This is where Morale comes in, and a series of tests required to maintain a formation or avoid being broken.

The last two sections deal with rules for Special Features, somewhat unique events which may occur, and a series of Appendices which outline the core rules, tables and more, including the use of ready based units and a series of Quick Reference Sheets.

This set of rules offers a fairly comprehensive approach to the Napoleonic Wars, which other rules have attempted to do in the past. However, the clear layout, use of colour coding for each section and the excellent examples make this a very ‘gamer friendly’ book to use. Although not a fan of the period, I would be tempted to start using these rules given their fairly simple but ‘realistic’ approach and the amount of support offered to aid both novice and grognard alike. Recommended for those who like to play a period ‘properly’ without having to struggle through endless pages to find the simplest of rules.