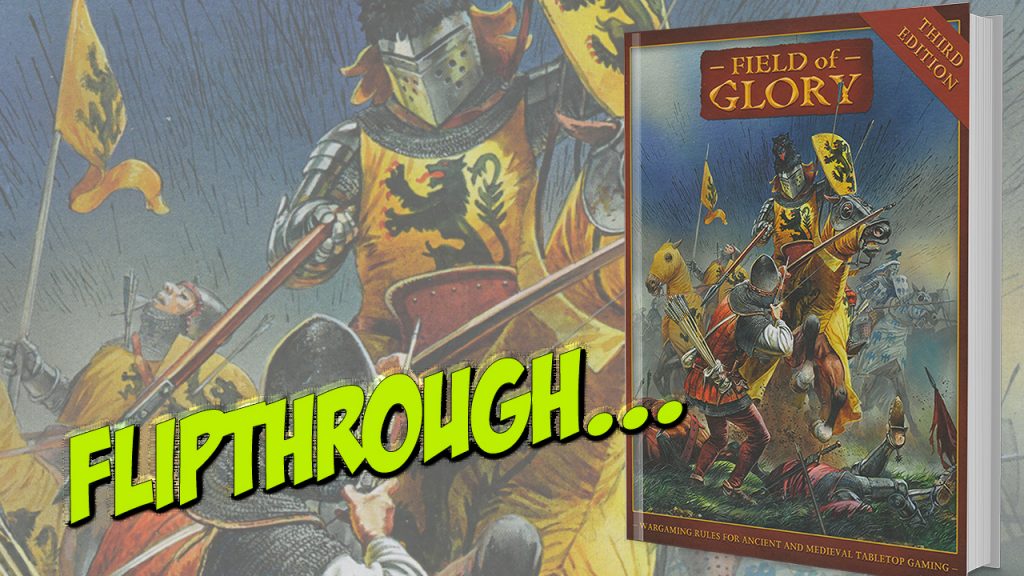 Partizan Press have partnered with Slitherine to produce a new edition of the Field of Glory rules, the 3rd in the series, with Terry Shaw taking over on writing duties from the earlier authors. Popular with tournament players, this new version has some minor changes that may have a major impact for those who use the rules.

This hardback book contains a brief introduction to gaming and the details of what is required to play. The layout works very well and a handy ‘Tip’ box insert offers some useful advice. There are 176 pages here, with a handy index.

This new edition has much in common with the previous one, with largely the same layout, even down to the charts. The information on creating battlegroups of bases, the main focus for stands, plus how to use them in terms of command and control, are all here. Sample armies are included, then the book moves onto a detailed discussion of the rules for playing the game itself. Movement rules and relevant charts are all clearly defined.

The basic turn set-up is outlined, and then each aspect of the turn is provided with a section which describes each phase of the turn in some detail. Compared to other rule systems, the level of discussion, example and explanation of each aspect of every phase is excellent. There is no room for incorrect interpretation or fear of too much contradiction during game play as everything is clearly laid out. This is perhaps why the rules work so well at a tournament level – almost every possible eventuality has been catered for.

After all the detailed explanation and coverage of so much, the rules could perhaps be seen as extremely difficult to digest. To help during play, there is a reference section which covers every aspect of getting things organized, including base sizes, troop types, terrain, how to set-up games and what terrain means, army composition and points values, in fact almost everything you could need in a slightly shortened format. There are some helpful reference charts that further simplify in-game usage.

These rules are easy to access and use and offer no real ambiguities. For those who have used the previous editions, the changes are fairly subtle. There have been changes to charts and modifiers to the die rolls, plus some fairly large increases to many of the point values for the different troop types. Additional dice have been added to the Impact phases for some troop types. However, finding these changes needs some careful reading and, if one is a beginner, is largely irrelevant. If you are looking for a set of rules that covers the Ancient to the Medieval period, and is perfect for competitive play, then these are the rules for you.