Fate of a Nation 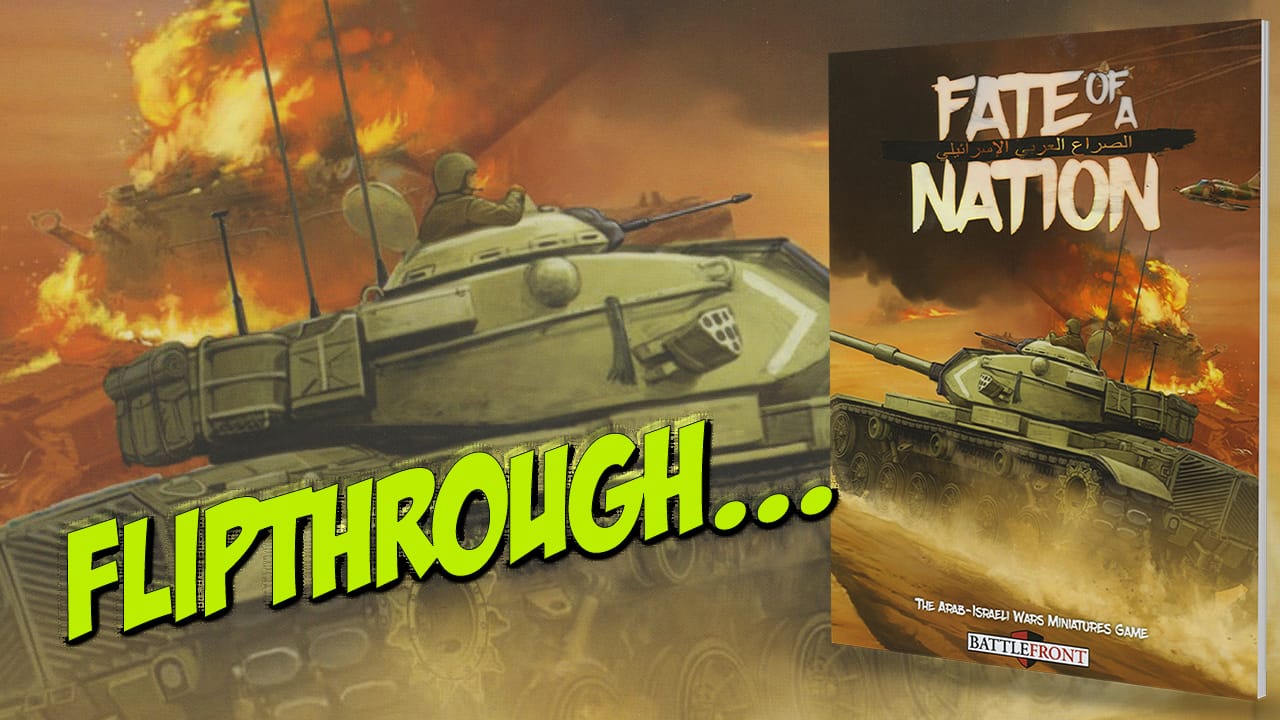 This 204 page hardback is the latest set of rules for 15mil scale tanks and figures in a join venture with Osprey Publishing and Battlefront. The revamped Fate of a Nation is a variant of the Team Yankee rules system which focuses upon the Arab-Israeli Wars of the late 1960’s and the early 1970’s.

The book begins with a history of the conflicts between Israel and various Arab nations, most notably Egypt, Jordan and Syria. The focus is upon two of the largest confrontations, the Israeli attacks of 1967 in the Six Day War and the Arab invasion of Israeli territory in 1973. There is a basic introduction to playing the game, including a note regarding compatibility with the ‘Nam rules. There is also a beginner’s guide to gaming in general, always useful to get new players involved.

The Teams and Units and Unit Cards sections explain how the game stat cards work, with clearly laid out examples. The Terrain section provides useful visual and descriptive examples of the typical ground fought over on a number of fronts, always helpful when rooting through your terrain supplies or planning new purchases.

Having dealt with the basics, the rules section begins with a flowchart of a Turn Sequence, followed by the Starting and Movement steps. The Movement of tanks, vehicles and infantry is dealt with using photographic examples to supplement the descriptive prose. Although this is fairly typical of modern rulebooks, the fact that it is done so well in this and pretty much every rulebook created by Battlefront can be seen as setting a standard for others to follow.

The Shooting rules come next. Again, although these cover a lot of ground in terms of who may shoot at whom, and when, line of sight, etc., the copious usage of staged photographs of figures on the table really helps with understanding. Tanks, aircraft, transport and infantry firing or being fired upon are covered equally well. Having rattled through the relatively simple rules, this section concludes with rules for using artillery, and the effects upon a target.

The main rules section concludes with rules for conducting an Assault, the up close and personal part of warfare, taking in the effects suffered as a result of losses and the Morale dimension. Weapon, Equipment and Special ability rules are dealt with after this, along with a guide to Force Structure and Picking Your Force, again useful for new players or those who want a more detailed explanation of how to go about collecting a viable set of miniatures.

Having provided the core rules, the army lists for each force are next. The Israeli Forces section cover both the 1967 and 1973 Wars, so some equipment remains the same but the later period sees new or upgraded weaponry being fielded. The venerable Sho’t, upgunned and upgraded Centurion tanks, are still here, but so to are later versions of the Magach / M60, plus the Tiran 5 tanks, captured and modified T-54 and 55s from the 1967 War which were fielded during 1973. There are also new Mechanised Infantry units and Sayur or ‘special forces’ with their jeeps and half-tracks, plus new support weapons and aircraft.

This pattern is repeated across the Egyptian, Syrian and Jordanian force lists, with a mixture of upgraded World War Two equipment nestling alongside more modern weapons, such as the Sagger anti-tank missile, T-55 tanks and Mig-21 jet aircraft.

There are details regarding 10 missions included, plus specials rules for fighting at night, minefields and more. There is also a painting guide to follow and photographs of painted miniatures to aid with getting the correct look.

This is a rulebook that is typical of the clear, easily understandable style associated with Battlefront products. The use of photographs, flow charts, simple force diagrams and rules examples make this an easy book for gamers to use. The coverage of the various weapons and their game stats is excellent. If you’re looking to run games during the two focus wars or pretty much throughout the period covered in the Middle East, this is the rulebook you probably need.