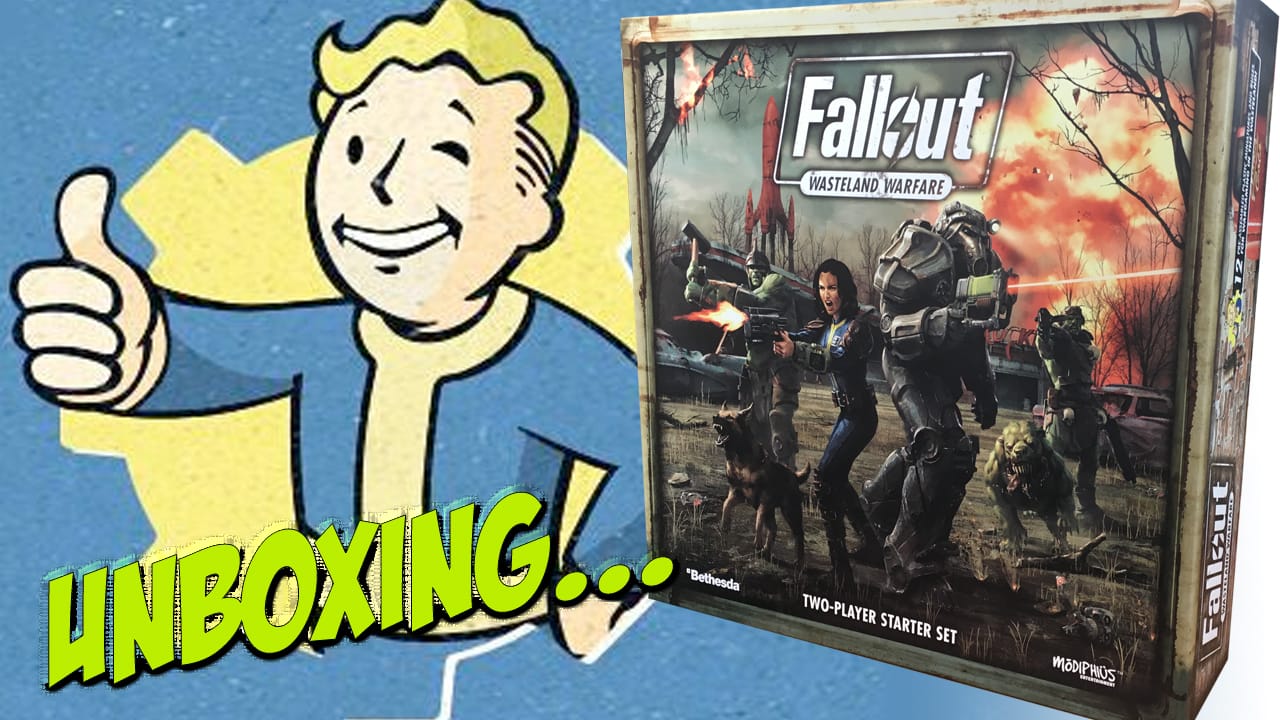 Modiphius Entertainment continue to produce top quality role playing and miniatures games based upon hugely popular licences. One of the latest releases is a two player starter set which turns the Fallout computer game franchise into a tabletop miniatures game, the aptly named Fallout: Wasteland Warfare.

Beneath the sturdy box lid with its great artwork, the first thing you find is two sheets of punch out tokens and colour coded rulers, all usable within the framework of the rules. These are double-sided and made from heavy duty card, ensuring they are durable during play.

After the tokens, there is a brief ‘starter guide’ to the game, which explains the key concepts, and offers a tutorial on the basic rules, as well as sample scenarios. Roughly akin to the ‘training game’ aspect of the computer game, this guide offers access to the game mechanics from the moment you open the box.

The starter set comes with a playing area, in the form of two single-sided maps, with suitably post apocalyptic scenes printed upon them. The two maps go together to make a 3’ by 3’ playing surface, made from heavy gauge paper that should wear quite well with use.

There are two lavishly illustrated books which cover the rules in full, the Rules of Play and the Campaign Handbook. The rulebook contains not only the rules, with copious written and pictorial examples, but also a beginner’s guide to assembling and painting the models and a useful quick reference sheet. The handbook contains rules for group or solo play, complete with AI rules, rules for creating a functioning settlement and a series of scenarios that may be played through as part of a campaign. Also included are examples of additional tutorial games that work to guide you through a whole series of different rules.

In the plastic storage tray lining the bottom of the box can be found the event and character cards, plus the item and weapon cards which are used with the game. Also included are the specialist dice required to play the game, again colour coded and with the symbols used. Last, but by no means least, are 12 miniatures, ranging from 6 characters molded in grey plastic, survivor-types including a Sole Survivor character and her dog, to various types of large mutants, Mutant Beasts, 3 armed and armoured Super Mutants and a Behemoth, all molded in a toxic looking green. These are character types lifted directly from the game, and are excellent 3D versions of the same.

This is a great introduction to the basic game, and a good value one as well. Modiphius are known for taking the time to make the most of their licenced products and have obviously worked hard to include everything that the gamer could need, even down to a number of ziplock plastic bags to store your tokens. A well-executed product that offers the chance to move the action from screen to tabletop remarkably easily.