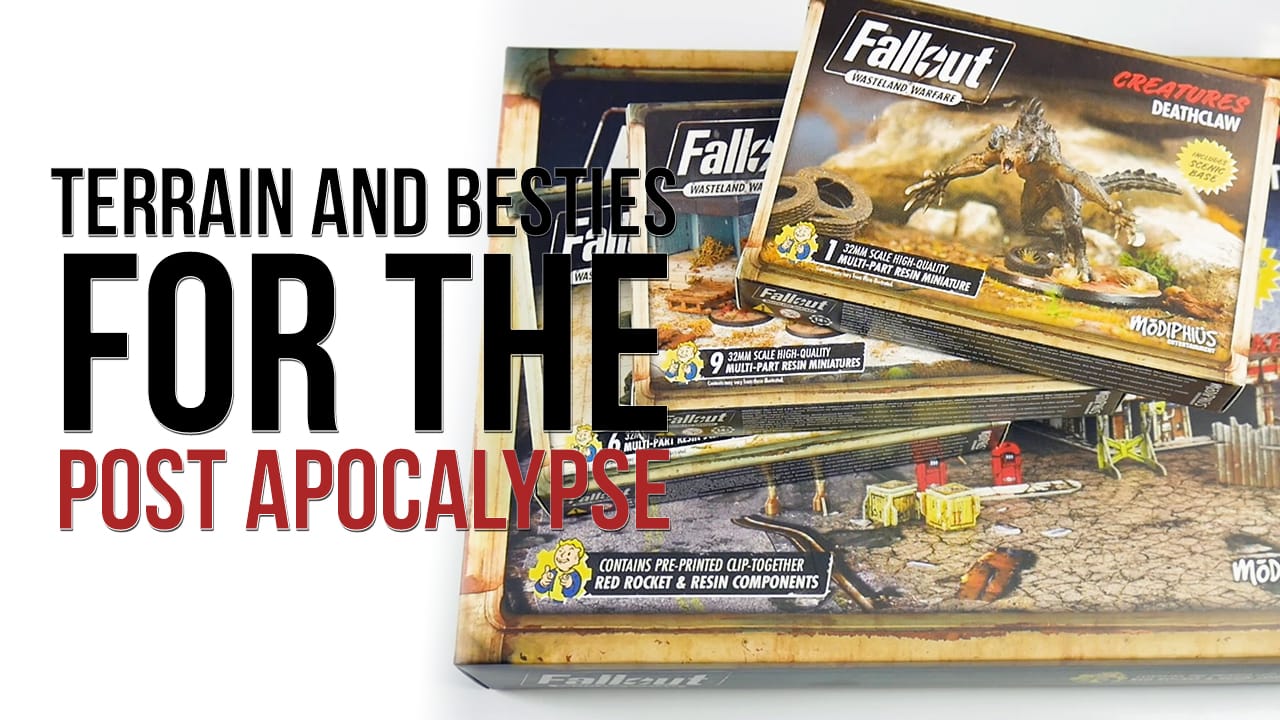 Modiphius Entertainment produce a number of excellent gaming products based upon the licences they hold. Yet they also produce items that are more generic and would grace many a tabletop, especially for those looking for that Post Apocalyptic aesthetic epitomised by the Fallout series.

One of the largest terrain sets in the Fallout: Wasteland Warfare range is perhaps the most iconic – the Red Rocket Scenic Set. This is a medium sized box full to the gunnels with plenty of terrain.

Once we lift the lid, the eye is drawn to the neoprene gaming mat, folded carefully. This is a 3’ by 3’ are, with approach road and exit for the placing of the Red Rocket service station upon it. The image on the mat is full colour and shows a cracked, parched landscape strewn with rocks and debris.

The next items are the three resin components, one the Red Rocket company symbol, a slightly retro-future looking space rocket and two petrol pumps. These are cast in a beige resin and are supplied unpainted. The quality of the casting is excellent.

The clip together buildings are next, designed and produced by the team behind Battlesystems. There are five sheets of top quality card, printed with a number of designs which clip together to form the service station itself. The pieces are punchboard style, ready to be popped out and assembled. There is also a sheet of grey clips that secure everything together. However, there are no assembly instructions included in the box.

Moving on, we have three small boxes to open, two containing ‘creature encounters’ and the third with more resin scenery. The Deathclaw set consists of a single 32mm sized resin miniature, which is multi-part but simple to construct. The figure also comes with a suitably scenic base which needs a simple paintjob to look good. This is a large miniature, which contrasts nicely with the Wasteland Vermin set. This time, we have nine small, multi-part resin miniatures, consisting of six Radroaches and three molerats. Each figure or group of figures has a textured scenic base, again needing a simple paintjob. The Deathclaw may look large and dangerous, but these Vermin are no less deadly, especially if they attack en masse. One way to avoid these attacks would be the use of barricades, in this case six Military Barricades. Again, cast in top quality resin, these are solid looking pieces, good to hide behind in a firefight or break up the assault of an attacker.

The last pack of terrain is perhaps intended to be used as part of a settlement’s defences or as a roadblock. Whereas the military barricades are uniformly constructed, these large resin cast pieces look like they have been constructed from whatever is left from the old world. Wood, corrugated iron, kitchen appliances, office furniture and more have been piled together to create strongpoints. This has been done in a fairly haphazard looking fashion, but each appears sturdy enough to protect those behind them from most small arms and dangerous creatures.

These are just a few of the high-quality products from Modiphius. They would grace the tabletop of any gamer, and have a character all of their own.