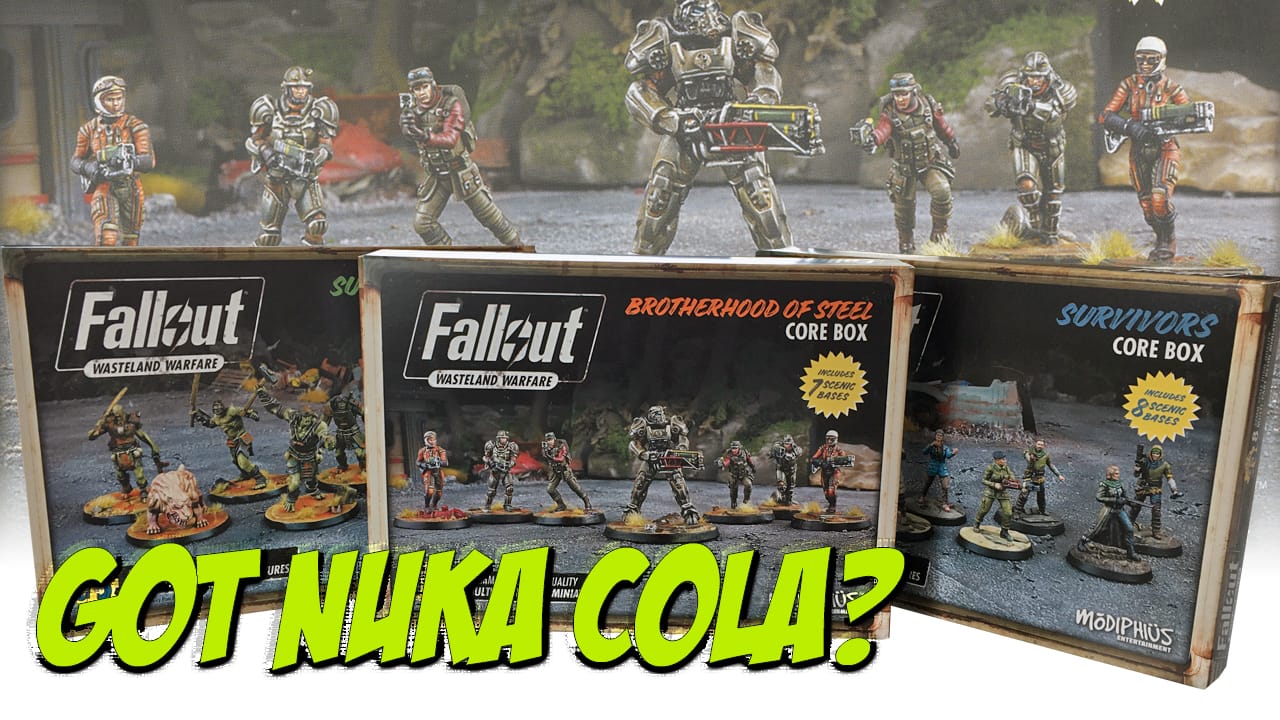 The three core boxed sets we have are Super Mutants, Brotherhood of Steel and Survivors. Each boxed set contains not only miniatures but game reference cards, including unit related large cards, plus smaller cards designed to add to the game overall, with weapon and equipment Items, Event, Wasteland and others.

The Super Mutants Core Box contains 7 miniatures, which are all on the larger, heavily muscled side. There are 3 Super Mutants, 2 Super Mutant Hounds, a Super Mutant Brute and a Super Mutant Master. These are brutal looking monsters, armed with close combat and projectile weapons, clad in rusted metal armour.

The second box is for the Brotherhood of Steel faction, the pro-human faction within the game. There are 2 Lancers, 2 Field Scribes, 2 Knight Patrol members and a T60 Paladin with a Gatling Laser. Each of the 7 miniatures is heavily armed with projectile weapons, and have various degrees of armour, up to the T-60 powered armour suit.

The final core set is the Survivors, a disparate group of named and unnamed individuals from the computer game series, 8 miniatures in all. We have Mama Murphy, Preston Garvey, Ronnie Shaw, Sturges, and 4 generic Settlers, 2 male and 2 female. This is a much more ragtag group than the previous two, armed and equipped with whatever they can find or make, but still based upon the denizens of the Wasteland that can be encountered in the game.

Each box of figures comes with suitably scenic bases and most of the miniatures require some assembly. All are provided unpainted, in a resin material which appears durable but with the ability to capture core detail.

As always, Modiphius have managed to produce some high quality miniatures based upon the characters from one of the core properties for which they have the licence. These are faithful replicas of the characters from the computer game series, whilst also being well thought out miniature sculpts.