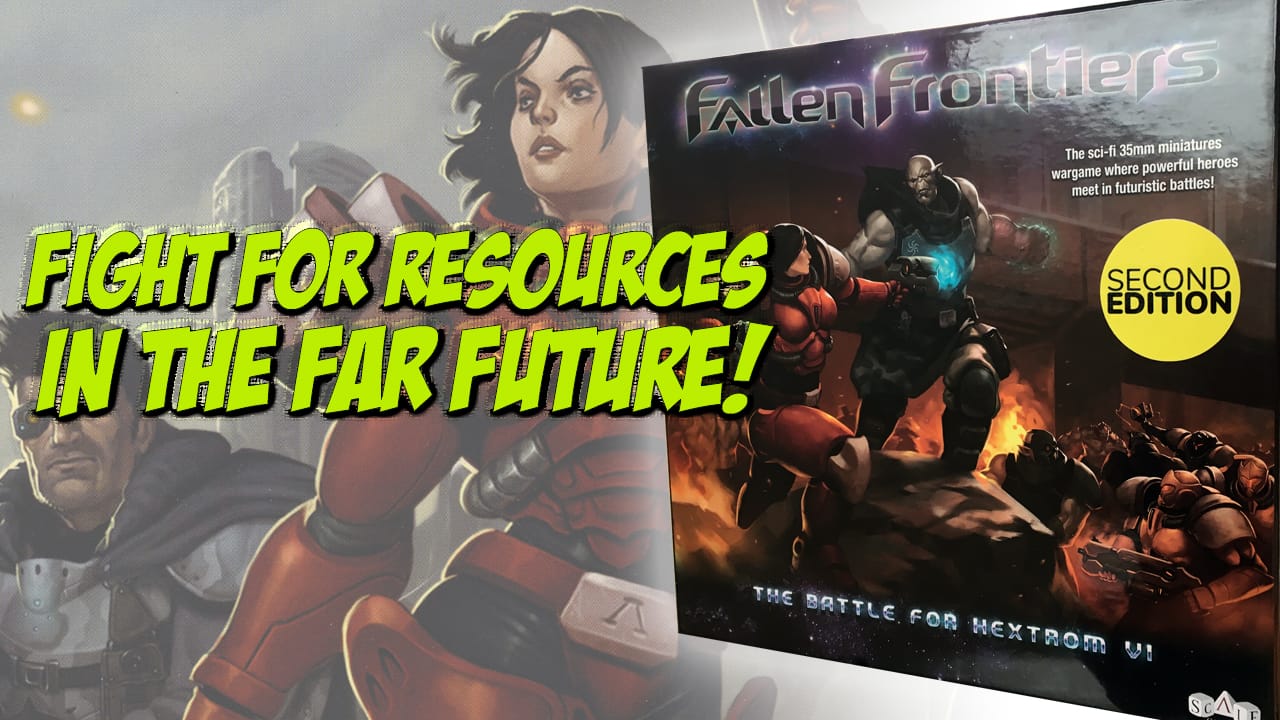 Fallen Frontiers: The Battle for Hextrom VI  from Scale 75 Games is the first in a series of miniature games. It is set in a futuristic sci-fi society where humans have colonized much of the galaxy and have found powerful energy sources and intelligent life forms with advanced technology.

In the universe of Fallen Frontiers different factions fight for control over planets and their strategic resources in order to expand in a galaxy that holds lots of secrets. The players take control of one of the two factions outlined in the box, the Ares or Riffs factions, that can be shaped by choosing troops, characters and cards that best adapt to their game style.

Fallen Frontiers is based upon combat squads, using 35mm miniatures. The squads offer protection and firepower for the force’s heroes. Heroes are the ones that define the game style because their attributes change the characteristics of their task force. Each squad therefore performs differently during a game depending on the hero that leads them. However, these heroes are not invincible, but instead are easy to eliminate when they are isolated. Players must balance the use of heroes and support to achieve their missions.

Lifting the lid of the heavy duty card box box, the first items you come across after a layer of bubble wrap are the miniatures. These are molded in two contrasting colours, with the Ares corporation troops being in grey and the Riff troops in light green. The Ares figures are clad in enclosing armour, whereas the Riffs are in light armour. There are multiples of the ‘basic’ troopers for both factions, plus squad leader and hero miniatures for each. The figures are molded in a hard plastic, with an integral base.

Beneath the miniatures tray, we have the other game components. The rulebook is a 59-page softback, with plenty of examples, photographs of painted miniatures, great artwork and information on the game background and the other factions within the game universe.

Next come the durable card counters and tokens, punchboard style, with 60 markers in total. In addition, two of the three punchboards contain the parts to create some scenery pieces, allowing for the creation of one shipping container, three craters and six ‘Kritihium’ sources, the securing of which substance being the main focus of the game.

The last few game related aspects are 63 cards, consisting of Tactic and Mission cards used to frame the game action. A set of single-sided game boards give you a playing surface of 48” by 48”, and the game comes with 6 x D6 dice and a nifty tape measure.

This is a typical ‘big box’ game like so many others. However, the card components and miniatures are of a much higher standard than some, and the box itself is touch enough to survive some continuous handling. The rulebook is well laid out and simple to follow, if a little less ‘glossy’ than it could have been. Overall, this is a product from the higher end of the market and appears to be an interesting game system.