Face Another Foe Volume 1 and 2 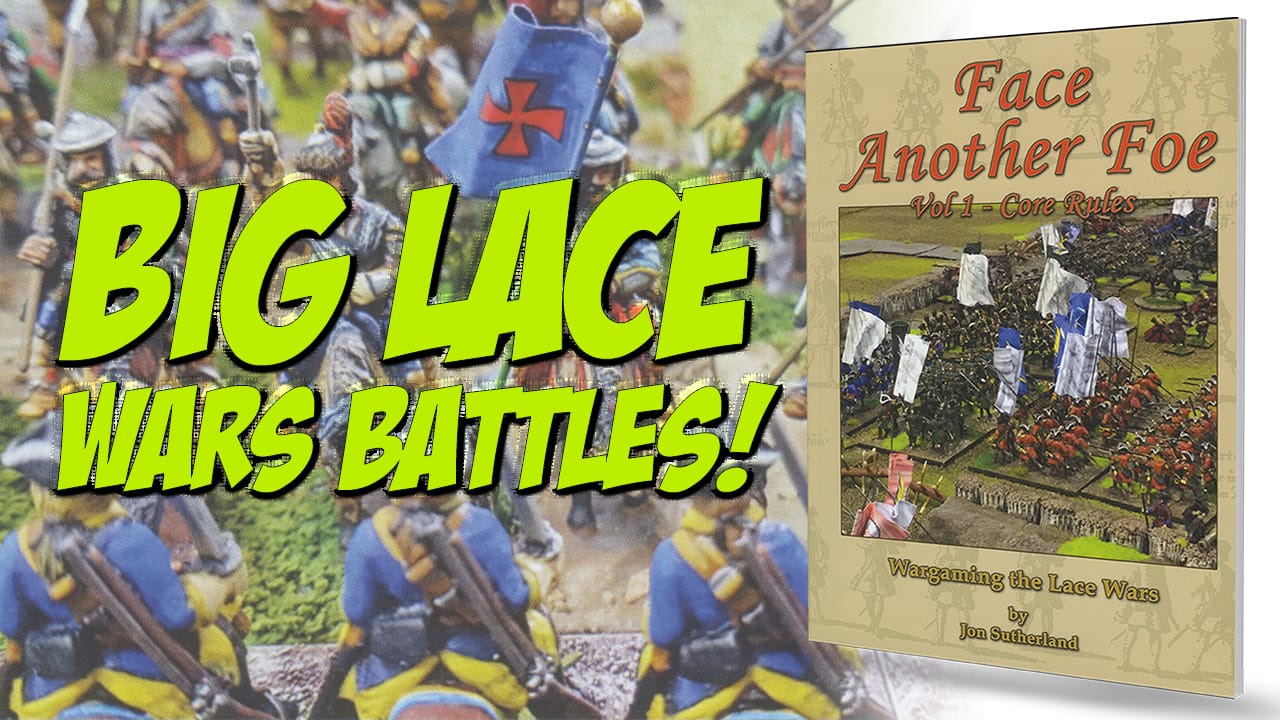 Partizan Press have released a new pair of books for wargaming the so-called ‘Lace Wars’, Face Another Foe. Volume 1 is a 64-page, softback book that provides the core rules and Volume 2 is a 68-page softback full of additional army lists. Based upon Jon Sutherland’s Mad Dogs and Englishmen rules for the Indian Mutiny, these new variant rules cover a lot of ground from a diverse period.

The rules in Volume 1 begin with an explanation of the design philosophy behind them, plus some thoughts on basing, with units largely consisting of three stands of 70 x 80mm bases, with  25 infantry figures spread across them, 9 cavalry figures as a squadron, single guns with 4 to 6 crew and commanders on 40mm round bases. The Movement rules work on rolling a number of D6, dependent upon the unit type and terrain. All the major Troop Types have been covered from around 1650 until 1750, a lot of ground to cover but done very well.

The book contains a number of useful uniform plates for a number of different forces and nationalities. Firing covers ranges, a host of weapon types from muskets to javelins, artillery, and other weapons, largely as various generic types. Modifiers and Morale Tests are explained, again using tables and die rolls. Hand to Hand combat is dealt with in the same style as the other aspects, in only a few pages. These are fast play rules which can deal with large battle encounters or the smallest skirmish. Casualty removal is per base, when a threshold of ‘loss’ is achieved, rather than on an individual figure basis. Each unit quality has a set number of ‘Lives’ they can take before they are removed, and also have a ‘Terror’ or morale number that they can take before they rout.

At the core of the game is the role of Commanders, which may be randomly generated or adapted based upon historical performance. Each commander has a ‘Character’, which dictates their command range and how many Special Cards they are allocated for use during a game. Each commander has a unique card, which are shuffled together and then used to activate each commander, which then allows the commander to give orders to the units under their command. The most senior commander on each side has access to a number of Special Cards which may be allocated to any of the units in their army. These cards are used against the enemy or as bonuses to one’s own units. Terrain is clearly defined and explained.

The remainder of the core rulebook consists of Army Lists for a number of wars during the period covered. Each army list is accompanied by some information on the war, and a scenario based upon a key battle from that war. The back of the core book has photocopiable resources, such as the command and special cards, roster sheets and a quick reference sheet.

Volume 2 in the series is largely an expansion of the army lists from Volume 1, covering more wars and nationalities during the period and even moving beyond Europe to add in some of the armies of India, the Far and Middle East, Africa and more.

Jon Sutherland’s rules are designed for ‘fast play’, which is useful for a gaming group during the course of a club night. The rules approach the period in a generic fashion, and cover a whole raft of different wars. Although purists could argue that the individual nuances of armies and wars is somewhat lacking, the rules do manage to cover this 100-year period remarkably well. Equally, ‘one rule to bind them’ is a great approach for those exploring the Lace Wars and looking to build up a new collection of miniatures. A pleasingly simple set of rules, with many hours of potential gameplay.