Eyewitness Korea; the experience of British & American soldiers in the Korean War 1950 – 1953 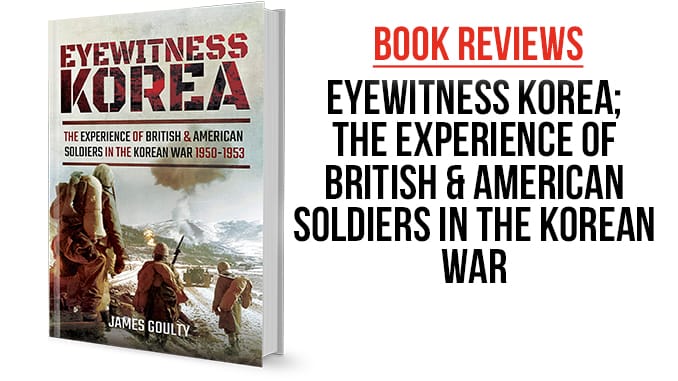 Eyewitness Korea is a hardback of some 259 pages, the last 48 of which are the notes, bibliography and index which tells you straightaway the research which has gone into this book.  There are sixteen pages of black and white photos, some well known others less so and a few appear sourced especially for the book.  Goulty has a Masters and PhD in history and it shows, this book is well researched and impeccably attributed.

Books based on recollections of combatants are usually opened more in hope than expectation as all too often they are simply reworking of similar generic anecdotes about blood and slaughter.  This book is a triumph for hope, the sources are varied and specific and the quotes are always apt.  There is none of the filler which is all too common in books of this type.  Goulty has trawled through a huge number of sources, as the bibliography shows, and has winnowed out an interesting variety of extracts to flesh out his book.  The writer has a comprehensive knowledge of the War and the period and this shows in the text, every sentence has a purpose, Goultry does not simply tell us things because he knows them.

The Korean War is very much the unknown conflict between WW2 and Viet Nam and this book does much to correct this. The chapters are thematic rather than chronological covering in turn the outbreak of the war, the experience of troops mobilising before and during the war, travelling to Korea, ground combat, coping with the climate of Korea and the experience of PoWs.  Every chapter is full of well presented information, always backed up by sources and very easy to read which isn’t always the case with academics.

From a wargaming perspective here is a lot of interesting detail in the extracts which cover the tactics and military philosophy of the various participants.  The differences in practices between the British, the US Army and USMC are set out in a clear way, with the odd aside on the French and others. The chapters covering the ground war are particularly useful for wargamers as they shed light on both what the forces were trying to do and on what actually happened.

The book sets out to show the experience of British and US soldiers and it does this in an even handed way, the other UN contributors and the RoK get mentioned in passing but are outwith the writer’s remit.  Sources are varied and numerous, Goultry avoids the trap of finding three sources he likes and regurgitating their juicier paragraphs.  This really is an excellent book and I can find no fault with it whatsoever.

Eyewitness Korea should be on the bookshelf of any wargamer (and anyone else) with an interest in the Korean War.  This book is so good I’ll probably go back and read Goulty’s other books and I certainly look forward to his next.