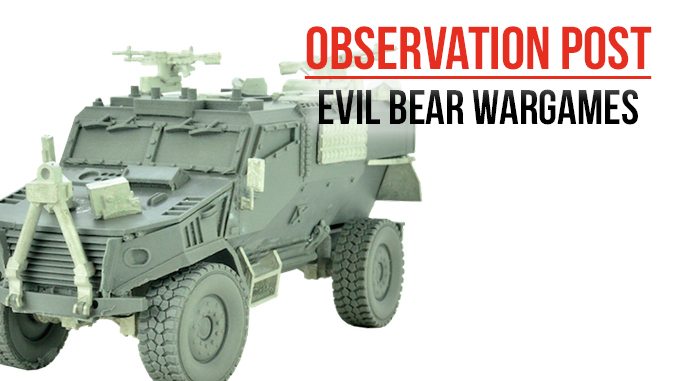 Evil Bear Wargames are the publishers of the Oscar Sierra Charlie modern combat rules. They also offer an expanding range of 28mm miniatures and 1/56th scale vehicles and other items that may be used with those rules or, indeed, many others.

Inspired by the creation of the new Virtus armour system and the adoption of the same by the British Army, these miniatures represent the ‘near future’ infantryman. Each miniature wears Virtus armour, including the fully enclosed helmet, with the option of open or closed visors. The figure packs are organized into ‘fireteams’, so riflemen and support, plus a command team and are armed with variants of the L85A2 and A3, plus support weapons.

Another recent release is the Foxhound, the British Army’s latest light armoured vehicle which is replacing the Landrover on active service. This is a resin kit with some metal parts and comes with two crew in Virtus armour. It is very quick to assemble and looks great on the tabletop.

Lastly, Evil Bear have introduced something different for modern / near future opponents. The ‘Spuds’ are aliens who want our resources, most notably our water. These are some of the nicest ‘non-humanoid humanoid’ warriors you can buy and provide a real sense of ‘alien-ness’ with the way they hold their weapons, their overall appearance, etc.

Evil Bear Wargames are a small company which always thinks big and has a good reputation for creating some great miniatures. The British Infantry we have featured are actually ‘rejected’ sculpts but we couldn’t see what was wrong with them! The company is all about providing top quality miniatures that they’d be proud to put on the tabletop, and continue to playtest the next versions of their OSC rules. Difference and innovation are their watchwords, so keep an eye out for more from them in the future.