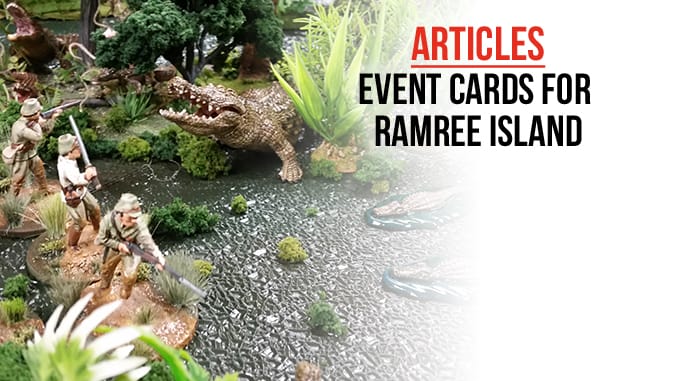 This set of event cards is for use with the Ramree island ‘Cacophony of Hell’ game as demoed at Fall In 2016 and seen in Wargames Illustrated 359.

The full list of events and quantity of each (as multiples of some occur), are as follows. Feel free to create more appropriate and entertaining events!

Effect: The player, acting as Japanese officer in command, must give motivational speech about the “way of the warrior.” Referee determines if successful (meaning, how great was the speech?), and so then double all of player’s assigned Japanese movement this turn and fight with +1 in close combat.

Effect: A large boa constrictor completely entwines slowest member of group, and all rush to save him. Cannot hurt boa in close combat for fear of hitting friend, so must wrestle to untwine it. Roll 1D6 per figure: 6 = success (referee rolls equal D6 to counter; 5-6 = success). Roll 1D6 if victim remains entwined: 6 = victim crushed. Fight continues each turn until finished, one way or the other!

Effect: A hidden crocodile springs from beneath water or foliage by surprise and attacks random figure (+1 modifier in close combat for croc, plus any others).

Effect: A small hidden path through the swamp has been found; double all assigned Japanese movement this turn.

Effect: Your group must rest; no movement or firing this turn (forfeit turn except for close combat, only if attacked).

Effect: A British flare illuminates a 12” radius around the relative center of your group for one turn. Add +3” movement to each Japanese figure and +1 to shooting in area this turn. All crocs in area are stunned and will not move unless attacked. OR All crocs in area disappear due to bright light.

Effect: A giant 30-foot long crocodile is randomly placed within 6” of your group (only referee controls its movement). Takes 4 hits to kill and only 50% chance to drive off if wounded.

Effect: A random soldier in your group screams and attacks nearest friend in close combat (at +1 bonus due to surprise the first turn); no movement this turn as you must deal with threat.

Effect: Your group moves in random direction this turn. Roll direction die (but can avoid crocs). All movement must be spent equally on Japanese, not crocs.

Effect: Canoe can hold 4 figures. Moves double any movement assigned to it, but can only move on water. Minus -3” movement for each turn up to 45-degrees around obstacles (e.g., -12” to turn around 180-degrees, etc.).

Effect: 1 random soldier must go behind a tree to do his business; no movement for figure this turn, and opponent has +2 in close combat against him, as he’s busy!

Effect: A random figure steps into quicksand up to chest, and needs help to get out. Roll 1D6 each turn and add +1 to die roll per 2 figures assisting/pulling him out: 6 = success. If figure not pulled out in 3 turns, then sinks into the earth! If figure makes it out, roll 1D6: 5-6 = rifle lost.

Effect: [May save card to play any time later.] Officer figure relates that he was descended from the Samurai, and shows his skill by getting double attacks at +2 in close combat with his katana for 1 turn.

Effect: One random figure falls into a water filled sinkhole. Roll 1D6: 1-4 = disappears and drowns in watery grave, 5-6 = surfaces and climbs out next turn. If figure makes it out, roll 1D6: 5-6 = rifle lost.

Effect: 1D3 other soldiers found lost in swamp; add to your group.

Effect: [May save card to play any time later.] Any 1 crocodile that is supposed to attack your group will instead attack the nearest crocodile as a threat to his territory.

Effect: [May save card to play any time later.] All your Japanese receive double movement this turn.

Effect: [May save this card to play any time later.] No crocodiles may move towards or attack your group this turn.

Effect: A random figure succumbs. Roll 1D6 for effect; 1-2 = sickening fever as light wound rest of game, 3-4 = as above, but roll again each turn to see if it worsens, 5-6 = incapacitated, but alive (must be carried).