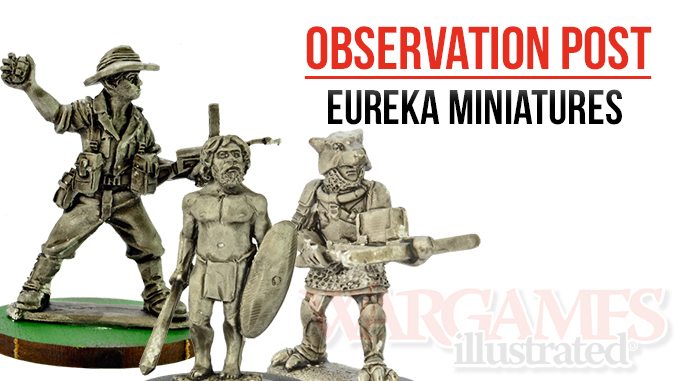 Eureka Miniatures of Australia, plus the US offshoot, have an ever-expanding number of ranges which cover pre-history all the way down to the modern day, via fantasy, steampunk and science fiction. We picked out a number of the most recent packs to show the breadth of what they have on offer.

Our first pack is these Denisovians, depicting a tribe of early humans that little is really known about. Designed ostensibly for use with the Primeval supplement for the Tribal games system from Mana Press, these are a stylized set of models with influences from the native peoples of Australia.

The figures are armed with traditional weapons, such as war clubs / digging sticks and boomerangs, and really capture the look of the Indigenious Australian. Many are in the act of throwing a spear, using a woomera, the specialist spear thrower invented by these people.

The miniatures are depicted in a range of poses and have some excellent characterization.

The next two packs are Australian troops from World War Two, dressed and equipped for the New Guinea campaign. The first pack consists of six troops armed with Owen SMG’s and Bren guns, plus a Vickers heavy machine gun team.

The next pack is a HQ or command team, with a pack radio and operator, two officer types with walkie talkies, a sniper team and a flamethrower.

All these miniatures are well sculpted and some of the poses are reminiscent of the Airfix figures of your youth.

The last two packs are taken from the Hawkmoon range, produced with the kind permission of Michael Moorcock himself. These represent the defenders of Karmarg in their Wolf armour.

We have a pack of eight swordsmen in various action poses, six with sword and shield and the other two with a sword and dagger combination.

The other pack contains eight miniatures armed with the repeating crossbow that is an integral part of the technology of the stories. There are also four pavises included in the pack, obviously designed to offer some protection on the battlefield.

Both of these packs are faithful to the source material and are designed to allow you to field suitable units for use in a large skirmish / mass battle style game.

An eclectic mix of miniatures, they are just a small sample of the many packs available. Whether you shop via the stores in Australia, the US or via Fighting 15s in the UK, Eureka offer high quality sculpts from a range of figure sizes, with something for everyone.