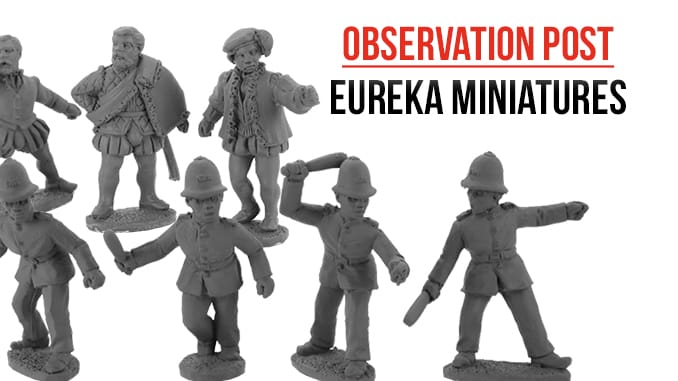 Nic Robson of Eureka Miniatures has commissioned a number of new figures to support the Brutal! gang warfare supplement for Mana Press’ Tribal rules system. These include The Crutchey Push, a gang of Australian ne’er do wells, and Italian Renaissance Civilians, two households alike in dignity.

The Crutchey Push set consists ten miniatures, six gang members, five of which only have one leg and use crutches, with the sixth having two good legs but what appears to be a false right arm (at least, I hope its false, as it is posed at an extreme angle!). The other four are police officers, charging into battle with truncheons ready. These are based upon the activities of the real life Crutchey Push gang, who liked to drink and brawl their way across Northern Melbourne in Australia. These figures are perfect for the game, with most being in active poses. The Crutchey’s are wielding their crutches as weapons and the chap with two legs may represent the one member of the gang who had two legs but only one arm. As differently able, psycho drunkards go, the Crutchey’s are great figures and the equally good coppers look scared.

The second pack of figures is very much my favourite. There are 14 figures, male and female, in either dueling or standing poses. The latter either look on fairly impassively or appear afraid. These are attired in all the Italian Renaissance finery one would expect. What makes them favourites for me is that they are obviously based upon Franco Zefirelli’s 1968 film version of Shakespeare’s Romeo and Juliet and, as an ex-teacher of English, I watched that movie so many times I’d know them any where. The dueling poses are very good, perhaps based upon sword fighting movements, and the clothing is excellent. I commend the sculptor concerned.

Both sets of figures feature as options in the Brutal! supplement, and are very nicely done. They could also be used with any rules where small-scale skirmish actions are the norm. I hope to see more gangs for the game, or at least some equally fine examples of sculpting from Eureka soon.