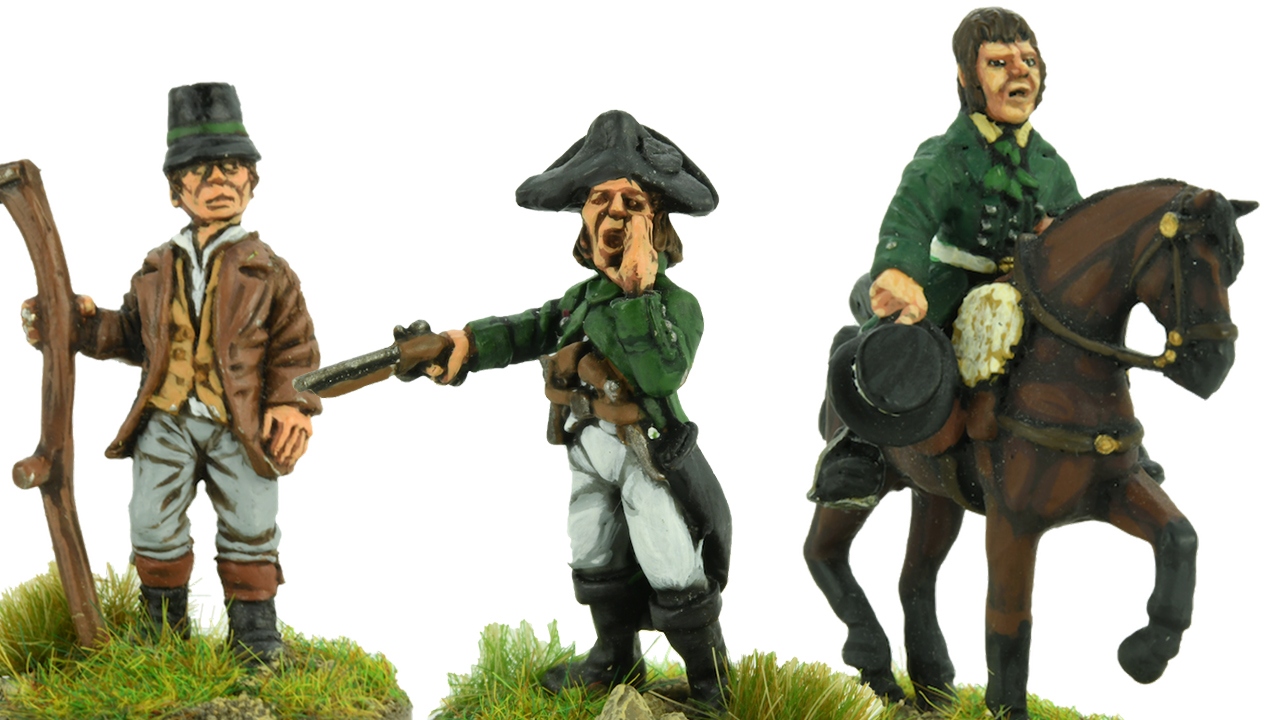 To go with Pete Brown’s Erin Go Bragh! article from Wargames Illustrated 397, we asked former Wi Editor and owner of Trent Miniatures, Duncan Macfarlane, to turf out some suitable models from his range. Being Duncan, he went much further, providing us with a load of extra details and conversion ideas!

All of the models discussed here come from Trent Miniatures – a 28mm range dedicated to the period of the French Revolutionary Wars (1792-1800 in Europe, but to 1803 in the colonies). Trent Miniatures are available from North Star and Arcane Scenery.

This figure is based on a centre company officer of the Reay Fencibles, as illustrated in ‘Uniforms of 1798-1803’ by F. Glenn Thompson. It’s the correct command figure for pack Ir98/05 Highland Fencibles. The figure was designed by Matt Bickley in the 1990s and released last year! Festina lente! It is a one-piece casting; no assembly required.

The Reay Fencibles was one of several Scottish Fencible regiments to serve in Ireland; volume Iv of Cecil C.P. Lawson’s The Uniforms of the British Army has a complete listing.

Basically, they were local defence volunteers – the ‘Dad’s Army’ of the time. Consequently they were present at most of the actions, but never in large numbers; a few dozen to a couple of hundred in most cases. Virtually a ‘must’ in any game of Sharp Practice.

Yeomanry uniforms, like the Militia’s, pretty much followed the styles and fashions of the Regulars. Often the foot Yeomanry would have a light infantry look. This pack comes with separate heads. Pack Ir98/31 has the same bodies (2 poses) but with separate heads with round hats with plume and fur crest.)

These figures could also be used as English Volunteer companies, which were the equivalent of the Irish Yeomanry and followed the same styles of dress – it’s all in the paint job! Volume V of Lawson has details of several London Volunteer companies.

This figure comes with a separate head (a random selection from five variants) and four separate right arms: with sword, firing pistol, pointing, and holding the reins. You get all four arms in the pack, so three arms for your bits box.

This figure is a minor conversion, the pointing arm has had a hat attached and been glued on in a lowered position. There are two horse poses, supplied at random. Since these guys mostly wore their civilian clothing, with all the assembly options and great leeway with your painting colours a huge variety is possible with just this one code.

This pack comes with separate heads, though the head on this particular figure is from pack Ir98/03 United Irish command. Yes, you are allowed to call the High Caroline hat a ‘flower-pot hat’, Barry Hilton’s ‘Fashion Police’ may wince but normal folks won’t!

These figures are supplied with steel wire pikes and have a loosely clenched fist through whch you must drill to insert the pike. Our recommendation is to drill through the fist as usual – it takes all of several second with a pin vice (I’ll recommend white spirit as a lubricating agent, that’s what Peter Gilder recommended to me over 40 years ago! – and it works.) Then, with a very sharp scalpel or craft knife, carefully cut through to the drill hole and prise the hand apart until the scythe (which comes from equipment pack Eq 10) fits. A double finger protection note here: do cut very carefully, if the blade slips the fingers on (i) the model’s hand can be damaged (painful!) and (ii) the fingers on your hand can be damaged (even more painful, and often productive of a red liquid that’s not paint!

Incidentally, Eq 10 has 3 scythes, 3 axes, 3 pick-axes, and 3 shovels, so I’m now wondering why I haven’t done a few more conversions along these lines.

Early in the Rebellion a lot of folks who hadn’t acquired a pike turned out with agricultural tools. Alternatively, this chap could just be innocently stood in a filed watching the mail coach go by.

This is the officer figure from the above pack. Usually his right arm floursihes a sword over his head. Flush cutters have removed that arm and it’s been replaced by the pistol arm from Ir98/19. His hair’s a bit log for a ‘Croppy’, but I’m not that finicky! He’s got a green coat – he must be Irish! I think his original sword arm ended up on a French sailor: waste not, want not.

Again, based on an illustration in Thompson’s book, but he got it from a well-known painting of a scene at the Battle of Ballynahinch in Ulster. The unusual headgear is a mitre shaped cap in black leather with a transverse black fur crest. The grenadier company wore the same hat, but with the usual flaming grenade badge in lieu of the bugle/horn. A little work with a small file and a paint job gives you the grenadiers too.

A note on painting – as well as the afore mentioned ‘Uniforms of 1798-1803’ by F. Glenn Thompson, the Osprey Men-at-Arms on the ‘Armies of the Irish Rebellion 1798’, by Stuart Reid, is an excellent starting point for painting and it’s also the source of design information for some of these figures.