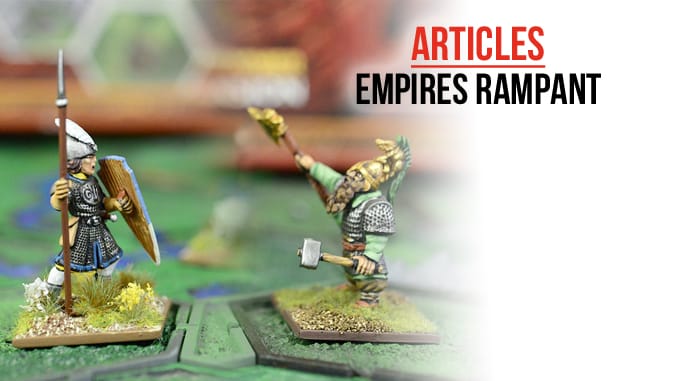 Every now and again, a club or gaming group needs something, to unite the members, promote a new game system or just to use forgotten parts of our figure collections. Recently, Sub-Editor Wayne ran a campaign at his club bringing a set of rules and an old gaming supplement together to have some fun.

This online article complements the theme of the September 2018 issue of Wargames Illustrated – Gaming Campaigns.

I like running campaigns or taking part in them. I much prefer the ‘fine meal’ of a linked series of games to the ‘fast food’ of one-off encounters. So, with this in mind, and given that a number of new members had begun turning up to the club, I decided to put together the simplest laissez-faire style system I could.

One of my favourite styles of campaigns involves the use of a map. I’ve used hex maps, bought and created by hand, in the past. My faithful old Battletech hex maps have been copied and used many times in the past. I’ve also used specially purchased hex paper and coloured pens, laminating machines, coverfilm and coloured flags and pins. Whilst still working as a teacher, I ran World War Two campaigns using versions of contemporary maps, or downloaded and printed off city maps from Games Workshop so members of the school club could have a focus for their Warhammer 40,000 games.

In recent years, I’ve used Campaign Cartographer, purchased from Wargames Vault, to create maps and print them off. However, for sheer visual impact, there is one handy style of map with built in rules that I have always enjoyed using – the 2007 version of Mighty Empires from Games Workshop, sadly out of production. It comes with double-sided hexagonal plastic tiles, contoured and themed with villages, rivers, fields and more. The set also came with a selection of plug-in cities and castles, plus small flags. Best of all, there was a booklet complete with rules to use the map with the Warhammer Fantasy Battle rules. I ran and took part in a campaign using those very rules a fair few years ago, then, realizing how useful it was to have one set, I managed to buy two more back before they became pretty much ‘eBay only’ and ridiculously expensive*. Since then, I’ve adapted the rules to other settings, or completely re-written them to suit the period.

In terms of rules, I didn’t want to use mass combat – excluding club members with small collections. Lion and Dragon Rampant from Osprey Games are popular at the club, plus to buy a copy would be fairly cheap for those starting out, so I plumed for those. In terms of a setting, given the average age of the members of the club, and the fact that some owned companies which were producing some lovely figures (being based in the Nottingham ‘Lead Belt’ and all!), I surmised that pretty much everyone must have come up the ‘GW Way’. They would therefore have access to a number of neglected fantasy miniatures, or could adapt an army to suit as per the remarkably open and generic approach taken by Dan Mersey in Dragon Rampant. So, with map ready to go and battle rules chosen, I decided to re-write the campaign rules from the Mighty Empires set to suit the members, invited the players via our club Facebook page and created my own sub-group on Facebook, to avoid cluttering up the main page. Those rules are presented here. Feel free to use them as is or adapt them to your own needs.

Empires Rampant games in action at the Lenton Gamers club.

It was a time of war, when despots and tyrants laid waste to the world and heroes struggled to maintain peace and justice. Warbands and armies were vying for control and the way of the warrior was king. Empires rose and fell, cities burned, and club members risked their eyesight building and painting model armies, then formulating the perfect army list to defeat that jammy bugger with the nifty dice rolls. It was a time for that rare beast to emerge, that rare creature whose name is often whispered by those whom dare – it was time for a CAMPAIGN!

Commitment: Whenever you are challenged or fancy playing a game. (This isn’t a ‘must play every week’ situation, it’s an ‘as and when’).

In this way, those who are committed to the campaign can earn extra Empire points to use, but not so many that they can always surpass those whom only play one battle.

If a player refuses to answer a Challenge and fight a Battle within a reasonable time frame, they must forfeit two Empire points to the Challenger.

The first Battle has the usual opportunities to earn Empire points at full rate. However, the second Battle earns you HALF the usual Empire points and must be against a different opponent than the first.

Empire points are gained through Battle or, occasionally, through other means as described by the Campaign Master.

The results of each Battle dictate how many points are gained as shown in the table below:

Draw – 1 Empire point for each player.

Narrow Victory (Destroy up to ¼ of the loser’s original points) – 2 Empire points.

Solid Victory (Destroy up to ½ of the loser’s original points) – 3 Empire points.

Major Victory (Destroy up to ¾ of the loser’s original points) – 4 Empire points.

Each player picks one event from the event chart below, starting with the player with the smallest Empire. ‘Roll off’ if two or more Empires are the same size.

You may not pick an event that another player has chosen unless all the events have been taken once each, in which case events can be picked a second time.

1 – The People Want!
Pick a player – that player must spend two Empire points to appease the people in their home city.

2 – Deserter Scum!
Pick a player. Next time they fight a Battle, that player must roll a basic Courage test for each of their units. If failed, that unit will not take part in the Battle phase.

3 – A Plague On Both Your Houses!
Pick a player. A sickness curse has been laid upon that player’s Warband. They may only move one Hex this turn.

5 – I Have A Cunning Plan, My Lord…
During any Battle fought during this round, your opponent must deploy all their Warband before you deploy yours and you take the first turn.

6 – The Art of Diplomacy
Pick one player. They may not issue a Challenge against you this round.

7 – That’s Mine, That’s Mine and That’s Mine!
The first unclaimed hex you Claim this turn only costs one Empire point rather than the usual two.

8 – Getting Better All The Time
ONE unit in your army may receive ALL the noted upgrades for that type of unit for free during your next Battle.

9 – Divine Intervention
Pick one player. During the Movement part of the turn, they become lost in a sudden storm. You decide which direction they will move for that turn.

10 – WTF!?
A magical portal appears and a group of strange warriors step through. Your army gains a Strength 12 Heavy Missiles unit with the Weighty Projectiles option. They count as armed with muskets or rifles and can be of any origin.