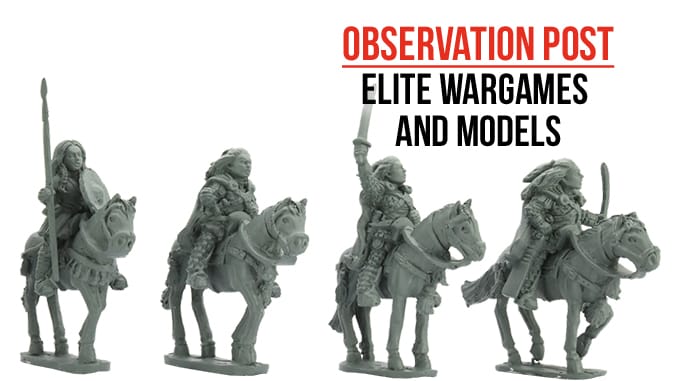 Elite Wargames and Models have added to their Female Dark Ages range with some new Mounted Warlord figures.

There are five figures in total, available as single rider figures and a mount. Two of the figures also come with open hands so you may choose from a set of weapons.

Warlord 1 consists of a figure sitting astride a horse. She wears typical dress of the Dark Age period, and can be given either a spear, axes or a choice of two types of swords in her right hand. The left arm can also be depicted holding a shield.

Warlord 2 wears scale armour and a cloak. Again, the open hand and left arm can have items added to them. The sword scabbard which hangs from her left suggest she may be from a more Eastern origin.

Warlord 3 is similar to Warlord 2, but carries a bow in her left hand and has an Eastern style quiver on the other.

The next figure is entitled Warlord Princess Eastern Europe. She holds aloft a slightly curved sword, perhaps acknowledging her force and signalling the charge.

The final figure is entitled Warlord Princess Western Europe and also holds her sword aloft, but wears finely wrought robes as befits her rank and background.

Each of these figures is suitably ‘chunky’ and well sculpted, with plenty of detail that would benefit those painters whom enjoy using washes. The horses are all fairly similar, and lack movement on the whole, but it is always good to see something different. These are just some of the female Dark Age-themed figures from this small company, and perhaps the first of the mounted ones.