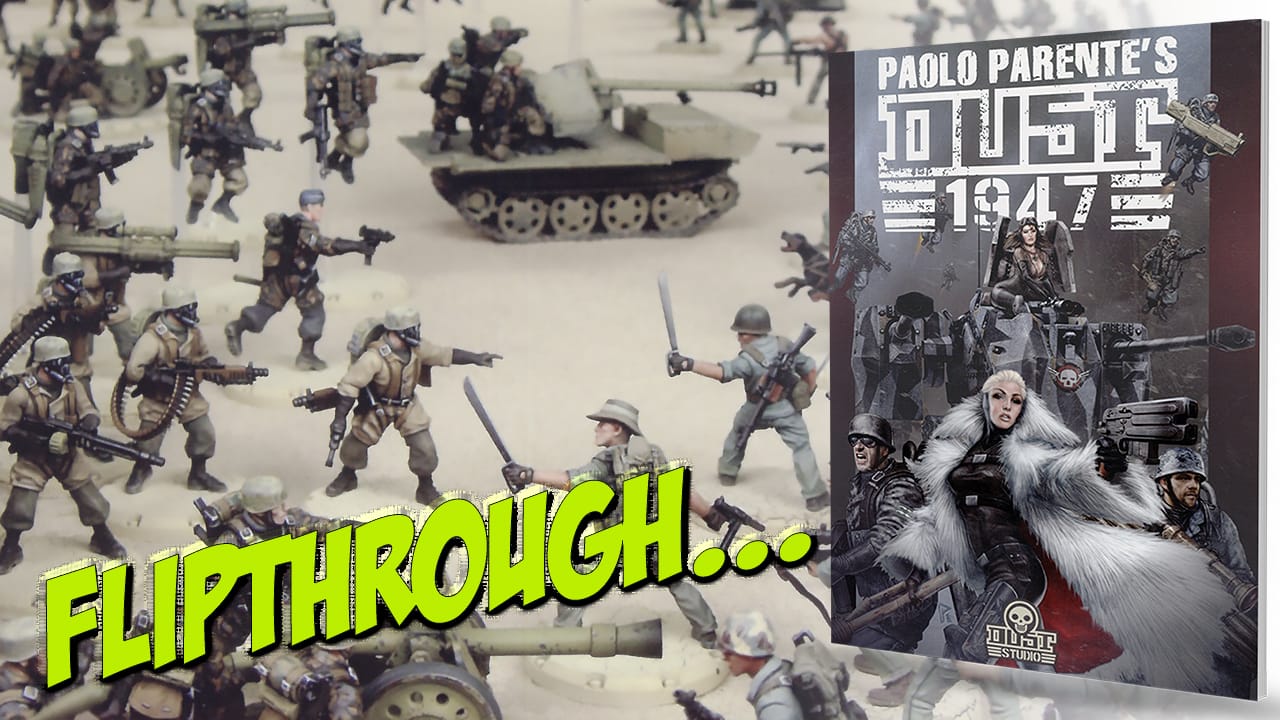 The Dust universe, in particular the gaming angle, has gone through a number of iterations. Yet the latest version, Dust 1947, brings together everything that has gone before and presents new rules for two different versions of one of the finest World War Two alternate history games on the market.

This lavishly illustrated book contains information about the variant timeline, the different Factions and the changes wrought by the introduction of Vril-Tech into World War Two.

The book also presents the basics of the first ‘type’ of game, which is based around the use of a 2D grid, army points and scenarios, all outlined in the book and supplements. Standard versions of World War Two vehicles, Vril-Tech advanced weaponry and Walkers, the piloted upright vehicles that are an integral part of the background.

A really useful aspect of the rules are the use of simple, easy to understand graphic examples of gameplay aspects, such as how to use the quick reference unit cards. These are stylishly done and in keeping with the overall look of the product.

The rules section defines the terrain, how to move your models, using the various transport vehicles both ground and aerial, how to make attacks, again using the square grid system as a guideline for movement distances, weapon ranges and more. These are all separated into simple to follow stages, described in suitable detail and again visually defined with some great graphics.

Building A Force is outlined in the next section, with points values, ratios of infantry to vehicles, picking out Heroes to lead your forces and a succession of TO & E’s as samples of what can be created.

The sample TO & E’s contain a snapshot of the various units on offer across the factions, from the fairly standard Infantry Platoons with Walker support, through the heavier units, esoteric units such as enhanced war apes, the reanimated dead of the Axis powers and the armoured combat suits used by the Sino-Soviet Union.

Having tried out the 2D version of the game, the rules for adding in a more 3D version of the battlefield is outlined. These build upon the earlier ruleset and largely transfers the grid system into a more open style of gaming.

There are 15 scenarios outlined, all generic enough to be used for any faction and with clearly laid out victory conditions, maps and instructions for use with both sets of rules.

The remainder of the rulebook adds special rules for terrain, types of weaponry, and the skills which may be used by certain types of troops. These include the mundane, such as artillery, marksman, etc. up to the more fantastical such as lasers, superhuman warriors and more. However, the rules are simply laid out, providing ‘useful extras’ rather than ‘game changers, and have a suitable level of ‘realism’ that works within the game universe.

The level of support and instruction provided by this rulebook is some of the best on the market –it would be hard to ‘get it wrong’ or be unable to rapidly check where you might have done so during or after a game. The overall ‘look’ of the book is excellent, with copious use of artwork, photography, colour coded sections and both content and index pages that always aid in accessibility but are often missing as a ‘duo’ in many modern rulebooks. The book comes with both photocopiable and punchboard versions of the template and tokens which are required for gameplay, meaning that you have everything you need to play. This is an excellently thought out rulebook for a fascinating alternate universe, and one which sets the standard for the alternate history World War Two genre.