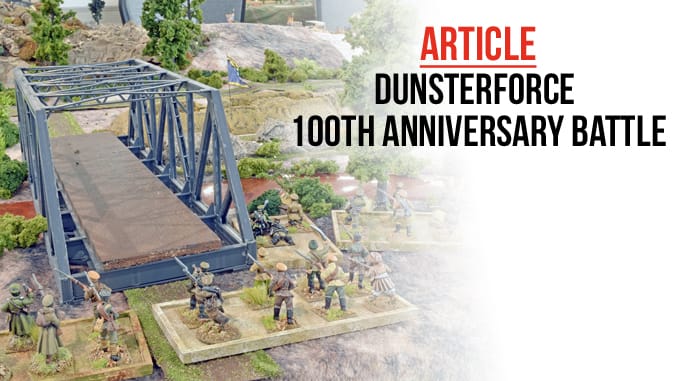 Editor’s Note: Bob is our US Liaison and has run a WI Showcase Game the last two times WI has journeyed across the Pond to a Historical Miniature Gaming Society (HMGS) convention. At HISTORICON 2015, Bob ran his “Saving Prince Kishan” game, and at COLD WARS 2017 he ran “A Cacophony of Hell – Battle of Ramree Island” (a scenario you will see in a future WI issue). We asked Bob to provide a write-up for the WI Showcase Game he ran for this year’s HISTORICON, why he selected it, and how each game played out, as part of an After-Action Report.

This online article complements the Historicon Convention report in the September 2018 issue of Wargames Illustrated Magazine.

The 100th anniversary of Dunsterforce, coupled with the near-completion of my new book, The Miniature Adventures of Dunsterforce, 1918 (a 16-scenario WWI book forthcoming later this year from Partizan Press), led my WI Showcase Game choice for HISTORICON 2018. Because my game was not co-located with the WI booth in the Vendor Hall, the specific scenario chosen was based on ease of set-up and breakdown for each day.

The first action involving Dunsterforce was against supporters of the Jangal (“Jungle”) Movement from the heavily-forested or jungle-like land in the Gilan Province of the Caucasus, south of the Caspian Sea. The Jangal Movement was an Islamic (broadly Shia Muslim) rebellion against the monarchist rule of the Qajar central government of Persia. Under the leadership of Mirza Kuchak Khan, the Jangalis had the following demands: autonomous status for their province; an end to central government corruption; an end to foreign interference in affairs of local peoples; and land reform.

After the Russian Revolution in 1917, Marxists within Persia became more organized and began collaborating with the Jangalis, who had been directly influenced by the Bolsheviks.Although the Ottoman Empire supplied the Jangalis with Maxim machineguns and other weapons, many modern guns and ammunition were purchased from Russian troops withdrawing from the front after the Russian Revolution. Therefore, the Jangalis were well-supplied with basic armaments (rifles, machineguns, and ammunition), and both German and Austrian officers/NCOs were involved with drilling the men.

The overall commander of Dunsterforce, Major-General Lionel C. Dunsterville, had identified Colonel Lazar Fedorovich Bicherakov, who led the only Russian force of any military value, as an important military ally in Caucasia. On June 11th, a column under Bicherakov was formed, and consisted of 1,200 Russian Cossacks comprised of cavalry, infantry, and a section of mountain artillery, plus a squadron of the 14th (The King’s) Hussars, and two British armored cars. Additionally, the column would be able to call upon two British Martinsyde G.100 Elephant Bombers for support. Some officers from Dunsterforce were attached to Bicherakov’s column as well.

Although the Jangalis had reached an agreement with the Bolsheviks to allow Bicherakov’s Cossacks to pass through Gilan in order to get to the oil-rich city of Baku, the Bolshevik-dominated Baku Soviet did not want the British forces in the city. The Jangalis, therefore, would not allow the British elements of Dunsterforce to pass through their territory. Ignoring this, on June 12th, Bicherakov’s column reached the Menjil bridge, which spanned the Qizil Uzan River. The approach to the bridge was defended by an estimated 2,000 Jangalis entrenched with “several machine guns … on the crest-line of the isolated hill, with a few small detachments on the lower slopes of the mountains.” Bicherakov expected “a hard fight”.  Thus begins the game.

This scenario involved a wide selection of troop types, perfect for a convention game.

Set-up: A 10’x6’ table was used for the 10:1 ratio 4-hour game, which ran twice during the convention for six players per game. The rules used were Soldier’s Companion (which I modified for a second edition, though still unpublished).

Figures: The 28mm figures used were a mix of Brigade Games, Copplestone, Old Glory, and others. The Jangalis – while considered tribesmen – are not like North-West Frontier tribesmen, but, rather, trained irregulars well-armed with modern firearms and Maxim guns. Since no miniature company currently makes Jangali figures, a mix of some Russian infantry (wearing either a shorter or pillbox-style fez made of lamb’s wool or flat cap for headgear), with only a few Afghan figures (Third Afghan War armed with rifles, not jezails), work nicely. Mixing in a few turban-wearing Afghan figures would also be acceptable.The two Lanchester 4×2 armored car models were from Old Glory. The airplane was not the historical Martinsyde Bomber since there is no model available in 1/48 scale, so a D.H.9 was used (we just ignored the observer!).

Terrain: As shown in the photos, terrain varies from arid hills to lush brush closer to the bridge. This allowed me to showcase a nice setup, with only one line of trenches (more like rifle pits), as well as mountain and lower foothills with surrounding brush and other bits.

Most important was ensuring that the game looked appealing, while still easy enough to transport and setup multiple times at the convention. To achieve this, the hills were created with carved, undecorated foam placed under the tablecloth. I like this approach, instead of the use of finished hills on top of the cloth or the use of terrain boards. The mountainous peak is a foam piece from a railroad shop, surrounded by cork pieces to create the lower precipitous slopes. Lichen and other bits were used to represent the brush/shrub. The river was created using acetate sheets (from exposed film or old x-rays!), which I think provide a great effect, yet are easy to transport.

One important item is the cloth used on the table, which caught many spectators’ eyes. The cloths used were the “Arid Lands 4’x6’ Plus #480” design from Cigar Box Battle Mats – http://cigarboxbattlestore.bigcartel.com/ – which I highly recommend. The mats are made of plush fur-like cloth, and do not crease when folded.

From the photos, it is easy to see the line of Jangali trenches defending the road to Menjil Bridge, with some Jangalis also amongst the rocky outcroppings on the upper slopes of the mountain. The Cossack-British forces entered the northern table edge on the road.

How They Played: I would like to thank my Assistant Gamemaster, Dennis O’Toole, a fellow member of The Colonial Boys Club, for help in running the games with me. Both games ended with entirely opposite outcomes.

Friday’s game saw a very brave and bold group of Cossack-British players, who led with their cavalry, hoping to ride over the Jangali trenches and cause havoc as the tribesmen fled. However, they quickly found out that this was not a great plan, especially since the Jangali players were hot with their die rolls. Each time a cavalry unit advanced over a ridgeline above the Jangali trenches, many saddles were emptied, and the cavalry forced
to retire.

For Saturday’s game, the Cossack infantry led the attack with the British armored cars out front in support. The hotter die rolls went to the Cossack-British players, as they managed to clear half of the Jangali trenches in quick succession, finally breaking their army morale to win the day.

One interesting item was that the British airplane was not shot down in either game (unlike the playtests for my home club, where the Jangalis shot it down each time). For both convention games, the airplane dropped its five bombs, strafed a bit, and then withdrew (It could stay 1D6+3 turns, after which it had to retire due to low fuel.)

It was nice to hear from the players that they all enjoyed the games, were kept involved, and felt that they had a chance to win. The winner of each game received various prizes from WI, including one of each of the Giants in Miniature figures, so popular, and available at the convention. Quite a nice prize, thanks to Wargames Illustrated.