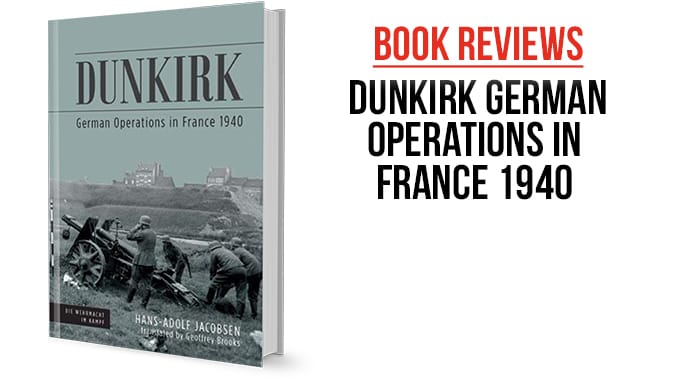 Originally published in 1958, Dunkirk relates the incredible success of the German army in crushing French, Belgian, and British opposition in a blitzkrieg campaign that took place over a few weeks in May 1940. In five chapters, running to about two-hundred pages, including fourteen maps, Hans-Adolf Jacobsen explains what happened and, perhaps more importantly, what did not happen when Hitler’s infamous order to halt the panzers came down on 22 May. The result is a valuable, albeit incomplete, analysis of one of the most important turning points of World War II told from the perspective of the victorious Germans.

Jacobsen begins with German objectives and deployment before describing how those plans were put into effect. His narrative, aided in parts by other historians, follows the well-worn track of events that led to Dunkirk: the Dutch could not cope with the violence unleashed on them on the ground and in the air and were blown away along with the Belgians. Meanwhile, the French and British attempts to stave off the attack unwittingly complied with much of the German planning: despite stiff resistance in local areas, particularly at Arras on 21 May, the Germans consistently outmanoeuvred the allies, forcing them into retreat after retreat. Almost one-third of Dunkirk, however, is given over to Hitler’s decision to stop the attack. This was partly a consequence of German successes and a need for consolidation, and to let the logistics and support elements behind the blitzkrieg to catch up with the speed of events, but also because divisions amongst the military and political command opened and thereby slowed progress. Moreover, the German high command, and in particular Hitler, believed they had all but won the campaign and a more leisurely cleansing of the enemy would follow. The halt proved temporary, however, and resumed after a couple of days, leading to the allied encirclement at Dunkirk, the episode that forms the final third of Jacobsen’s book. He concludes with a summary of his understanding of the battle for France, which produced a victory for the Germans but not the complete victory they needed to win the war.

It is only fair to ask what contribution a book written in 1958 makes to our understanding of the campaign against France when it has been available as a source to historians for sixty years. There is nothing new in Dunkirk, but Jacobsen’s succinct operational overview of the German assault in the west provides useful insight told from the ‘other side’ of our too often Anglo-centric histories. Moreover, his analysis of the Halt Order undermines much of the mythmaking indulged in by later historians. And despite the sprinkling of random italics and often disjointed text, Dunkirk is an enjoyable read. There is not much in this for wargamers, however, beyond a better strategic understanding of the campaign, though that in itself makes this work recommended for WWII enthusiasts.