Dracula’s America: Shadow’s of the West 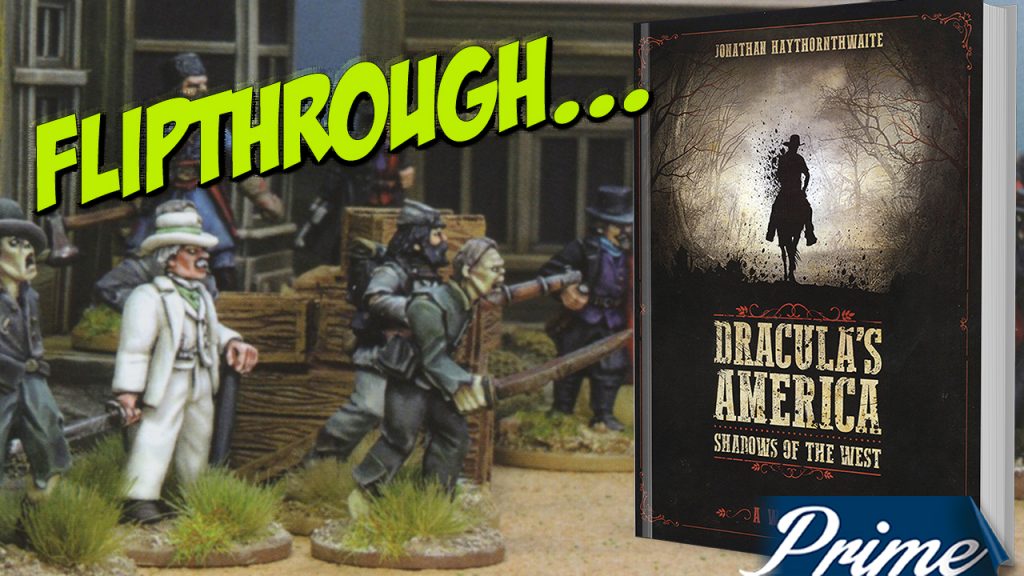 An upcoming set of rules from Osprey Games, The Shadows of the West is the first in the Dracula’s America series. The basic premise is an alternate timeline where Dracula and his minions have taken control of the USA just after the Civil War. Consequently, life in the Union is quite different and all sorts of fell creatures, plus brave men and women, feature in the game.

The first part of the hardback book outlines the key concepts and generic rules, allowing the game to be played in two forms, as both a normal, slightly ‘Hollywood’ version of a Wild West game but also using the more Weird West background.

The book focuses in on the basic rules. A standard deck of playing cards is used for Activation, with Aces high and black cards taking precedence over red. The game uses three different types of dice, six-, eight- and ten-sided. These are modified during the Action phase but this is done by removing dice from the number to be rolled rather than adding a plus or minus to a roll. The rules encompass detailed aspects of the Shoot, Fight and Recovery Phase and move onto Advanced Rules for horses, dynamite and more.

The book then takes you through setting up your first game. Each player chooses a Posse from those available for a one-off game, and seven scenarios to play  through. Each Posse is between 6 and 10 miniatures.

There is also a fairly detailed campaign system. However, this system is simple to use and provides some good narrative points to keep the campaign flowing. This then allows you to carry your posse forward for a number of games. Up to this point, the focus has been largely upon the use of the rules for ‘standard’ Wild West gaming, making the first half a useful set of rules for those with an interest in the genre.

At this point, the rules add a comprehensive and fascinating background for the alternative version of the Wild West, complete with a divided nation, a number of Factions vying for supremacy and a whole range of supernatural creatures. Throughout, some excellent artwork and photographs of miniatures really help to evoke the background. A number of extra character types and special rules are included, adding a whole new layer to gaming using the rules.

In many ways, this is really two games in one, but the background and artwork really draws you into the desire to game within the titular Dracula’s America. Although you may use any suitable miniatures, the fact that there is a whole range of special miniatures for the Weird West background available from North Star means that you can get hold of figures to represent all the named Factions. The mechanics are simple and easy to remember, and the playing card activation system makes the whole thing suitably varied. A welcome addition to the Weird Wild West genre, with more books rumoured to follow.