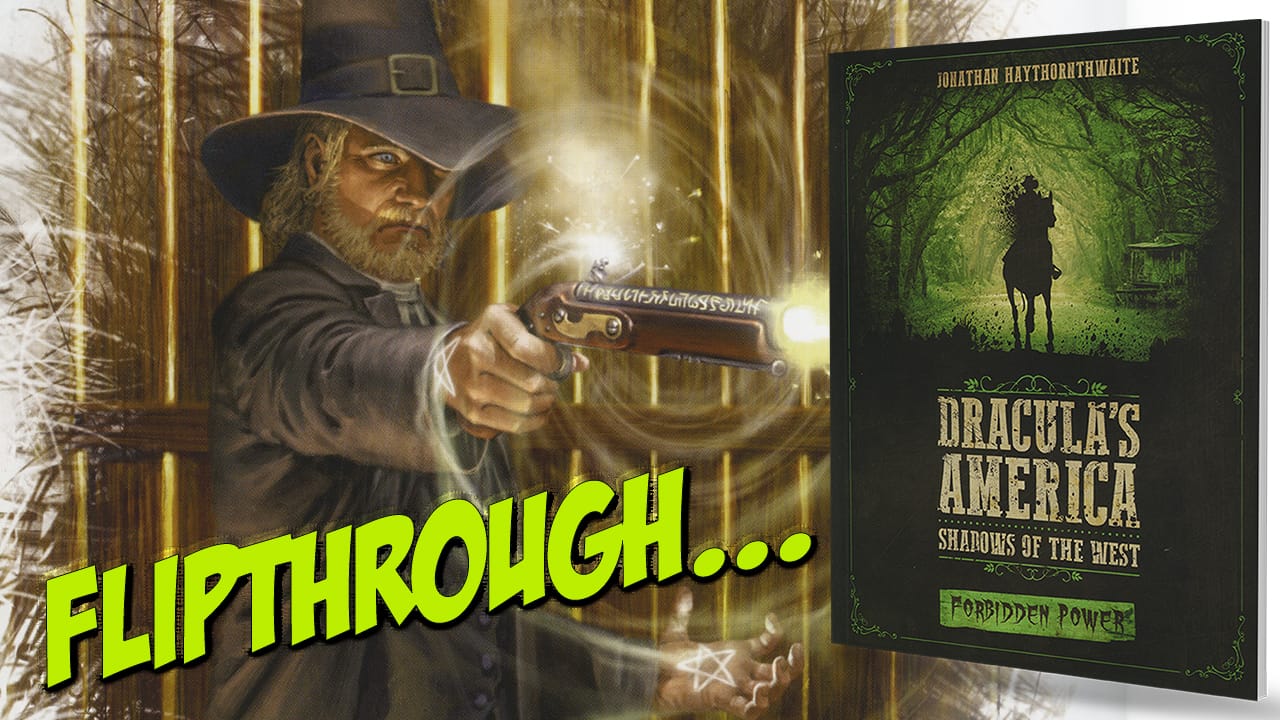 The popular Dracula’s America: Shadows of the West rules from Osprey Games continue to move forward, with the latest rulebook and supplement Forbidden Power bringing the current narrative to an end. New Posses, new powers and a few new bestiarys, all suitably weird and wonderful.

The book is to the usual Osprey high standards, and begins with an introduction and additional background, a ‘story so far’ of what has led to the re-emergence of the worshippers of the Elder Gods and the impact on America, particularly on the Southern States.

The New Game Rules section introduces The Swamplands, a new setting where much of the action in the narrative takes place. These include rules for dealing with the dangers of the swamp, from the physical conditions therein to the denizens, as found in a new Bestiary, including the types of twisted creatures who inhabit these dismal places. There are also four new ‘Stealth Missions’, designed to offer a slightly different style of game, with sentries and straightforward objectives.

Building partially upon the events of The Hunting Grounds book, this Forbidden Power narrative supplement adds new facets to the game, including the horrors of the Eldritch Terrors, with a new Madness Phase, charting the impact that all the horrific events and sights have on the characters. Some of these sights include a number of new supernatural or Eldritch Entities, with another Bestiary to provide game details for these horrific, otherworldly beings. To aid in the battle or insupport of the Elder Gods, there are new Arcane Powers, yet more magic spells for general or specific Factions.

Talking of Factions, there are two new ones to fit this part of the narrative, the nefarious Church of Dagon and the White Witches of the Salem Sisterhood. The Dagonites work to hasten the arrival of the horrors from another dimension, whereas the Sisterhood battle to prevent the coming Apocalypse. In addition to the two new Factions, there are also a selection of new Hired Guns, the additional characters who may be hired to give aid to a Posse. Again, these are appropriate for the new background, but are also characterful additions to the overall game universe.

New Gear, Arcane Skills and rules for new Mercenary Drifters all add to the options available to players, as do the rules for creating and using Eldritch Relics and Cursed Weapons, a nicely evocative options. New encounter tables for adventuring in the Deep South also feature, with some themed events and locations that really do make this an ongoing saga with a range of possible plot lines rather than simply a tabletop skirmish game.

Nowhere is this over-arching narrative more evident than in the Narrative Campaign section, which places Posses into one of two ‘Alliances’, offers more Encounters and eight possible scenarios that bring together pretty much every part of the story arc so far into a cohesive whole. Each scenario provides Posses with the chance to further or prevent the rise of the Elder Gods, facing each other and the deluded minions of the uncaring extra-dimensional beings. The outcome of each scenario has an effect upon the rest if played in order, and brings the story of one aspect of the tale of Dracula’s America to either a glorious end or a hideous Apocalypse.

This is a great book, which brings together many story strands from the Shadows of the West narrative so far, whilst also offering something new and useful for the occasional gamer. The author has done an amazing job to stitch together a cohesive slice of Weird Wild West action and couple it with rules that not only entertain but also place the concept of a central plotline at their heart. Yes, you can buy just the core rulebook and have hours of great gaming within both a ‘standard’ and Weird Wild West background, but it’s only by getting hold of the supplementary books that you can get the full Weird ‘experience’. Although the Shadows of the West storyline is now complete, I hope that other aspects of Dracula’s America and the wider world will be explored at some point in the future – what’s happening back East? What of the North and Canada? How is Europe faring without so many supernatural creatures to worry about? Tell us more!