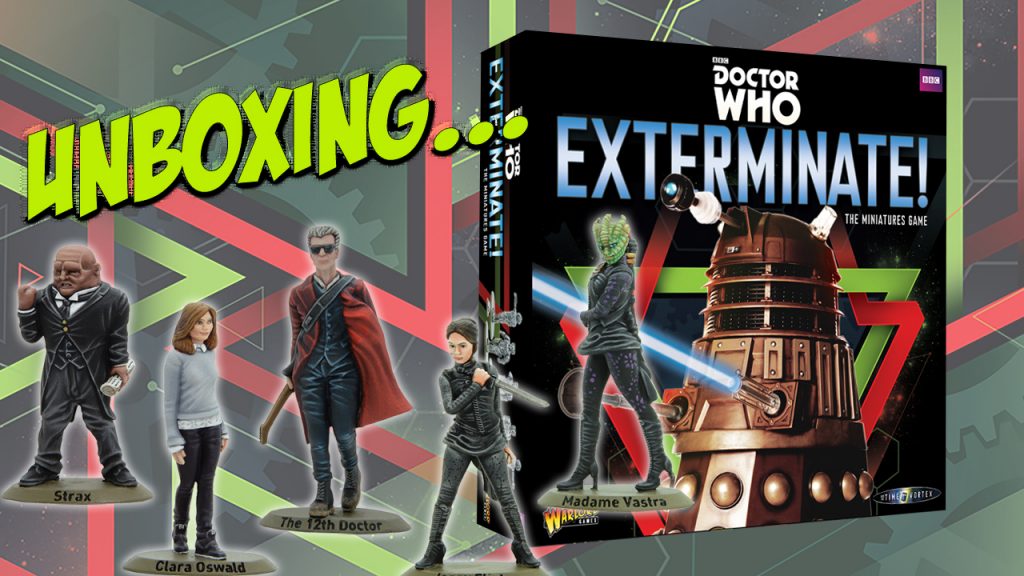 Coming soon from Warlord Games, the Exterminate! miniatures game places you in the Doctor Who universe. You have the option of fighting skirmish Battles between various Factions or taking the role of The Doctor in a series of Adventures inspired by the TV show.

This is a boxed game that is crammed full of material. First of all, you get two distinct forces or Factions, 12 Time War Daleks, 12 Cybermen Legion and 14 of the latters robotic underlings, the Cybermats. All of these are plastic, ‘push fit’ and simple to assemble, supplied with bases where appropriate, all ‘on the sprue’.

The boxed game comes with three A5 sized booklets. One represents the core Rules for the game, covering everything you need to play a basic wargame. The second booklet expands upon the core and allows you to take part in Adventures, bringing The Doctor, his Companions, Agents and more into the game. Lastly, there is the Guide to the Time Vortex, which contains key additonal information on the different Factions included in the box as figures or cards, a painting guide, weapons and Traits reference charts and a number of scenarios which can be gamed with or without the Doctor.

There are 10 specialist Combat dice included with the game. These have symbols rather than numbers on their six sides and are largely used to randomize the number of hits and amount of damage caused.

The gameplay makes use of a number of cards of the standard playing card size. There are 34 Recruitment cards, 56 Adventure cards and 36 Battle cards.

Recruitment cards contain all the information needed to use the characters and the relevant Factions. Included in the game are cards for not only the Daleks and Cybermen but also the 10th and 12th Doctors and their key Companions, plus the Judoon, the Silents and the Zygons as both Agents or Factions in their own rights.

The Battle cards are used throughout the gameplay to enhance or negate results, such as adding additional hits, guaranteeing that a character stays alive or is Exterminated, creating re-rolls, etc. Five of these are available to each player every turn, and those that are used are replaced randomly from the deck in what is called the Upkeep phase.

The Adventure cards consist of 15 generic cards for use by anyone and a number of Faction specific cards for all those outlined on the Recruitment cards. These can be used in both the core and Adventures game to represent the gadgets, tricks and moments of derring-do that are a key part of the history of the TV programme. However, depending on the scenario, there are only usually five of these available to each player during the course of a game, although some Faction specific cards are included free using the My Stuff trait.

The game also comes with a double-sided 3’ by 3’ battlemat, double sided 2D card scenery, a card ruler and 59 card tokens for use in the game for recording statuses, etc. These are made from high quality card, making them durable for prolonged usage. There is even a card ruler, negating the need for a tape measure or similar and adding to the ‘open it up and play’ nature of the game. Two themed quick reference sheets help to make learning the rules even easier and act as aids during play.

The overall quality of components in this boxed set is great for the price. The fact that you have two different sets of rules, inbuilt options for adding more Factions to the game and the opportunity to expand using the planned releases from Warlord Games are all positives. Plus, if you are a gamer who likes Doctor Who, this is the closest you can get to a wargame which simulates the TV show. It’s great to see a licenced product that helps to support and promote the programme indirectly, is comprehensive in terms of contents and has a level of playability for young and old alike.