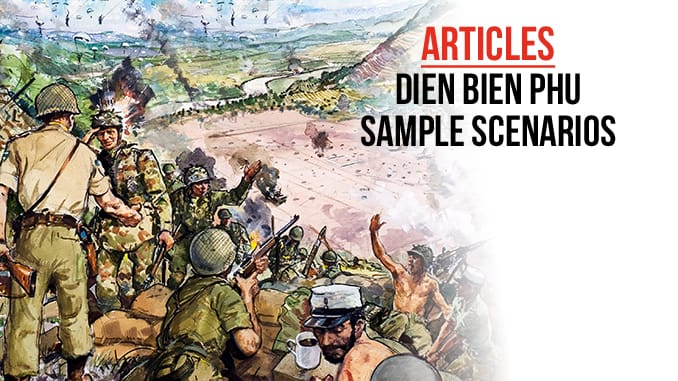 The French conducted active defense measures intended to push back the ever-tightening Viet Minh stranglehold the entire time the CEFEO garrison occupied Dien Bien Phu. Sortie scenarios encompass road-clearing operations to maintain the lifeline between Isabelle and the main French base, patrol actions in the vicinity of strongpoints or large raids against Viet Minh flak positions. Key elements include concealed VPA entrenchments across roads and around villages. Depending on the scope of the scenario, the battle could encompass two villages and might call for sandwiching the VPA forces between two CEFEO advances. If possible, season the game with at least one M-24 Chaffee.

The VPA’s struggle to capture and hold French strongpoints stands as the quintessential focus of the Dien Bien Phu campaign. Players can choose plenty of variable conditions from the special rules section (especially concerning fortifications and artillery) to ensure these tabletop battles don’t turn stale. Adopt some additional special rules below to further spice up a strongpoint assault scenario.

Breached Wire. Sappers may create gaps in linear obstacles after deployment but before the first turn. The VPA player chooses up to three breach points (no closer than 12” from each other), rolling 4+ on d6 for success. A gap measures 1d6 inches wide.

Approach Trench. If the VPA player has available reserves, the player may deploy one unit per turn on the VPA table edge without undergoing penalties caused by a French barrage (see artillery special rules).

French Boobytraps. The CEFEO defenders may have hidden some mines to protect bunkers, pillboxes or other defensive positions. Whenever a VPA unit assaults or moves into CEFEO entrenchments, roll d6. On a 4+, the unit takes a small HE weapon hit. Resolve this damage prior to any close combat, just life defensive fire.

Players inspired by the Battle of the Five Hills or other large combat actions at Dien Bien Phu can certainly play them with squad-based elements utilized in Battlegroup or Crossfire. However, platoon-sized maneuver units offer a good alternative by reducing the number of tabletop elements you need to control while still providing a tactical narrative reminiscent of actual battle accounts (and importance of frontline leaders). To do this, adopt a 1:6 figure scale and assign 5-6 figures to CEFEO platoons and 7-8 figures to VPA platoons. It should take around 100 figures to field a battalion, which still leaves a comfortable margin for recycling casualties if necessary. Using Bolt Action rules, the scaled down platoons would function like small squads in which NCOs now represent platoon commanders. For armor, represent two or three tanks with one model; for an on-table battery, use one artillery model.

Barraging Reserves. CEFEO and/or VPA players may use this rule to delay the arrival of their opponents’ reserves, requiring them to take a penalty when checking to deploy them. Alternatively, roll two free 75mm HE attacks on reserves as they deploy, applying the best result.

Offboard Heavy Weapons (Direct Fire). Once per game, CEFEO and/or VPA armies may benefit from heavy weapon direct fire support. For simplicity’s sake, treat such attacks as the equivalent of a 75mm weapon. This could represent recoilless weapons or casemated mountain howitzers for the VPA and Bison main gun rounds or plunging Quad-50 fire for the CEFEO. If players agree to increase the amount of times this rule may be used, limit it to once per turn.

CEFEO Bunkers. For substandard French bunkers and pillboxes, reduce their effectiveness against some heavy weapons. Treat the such bunkers as simple hard cover against 105mm bombardments or direct fire by recoilless weapons or mountain howitzers. Apply normal bunker rules for small arms fire and light/medium mortars.

CEFEO Entrenchments. Treat French trenches as soft cover unless they are in particularly dismal shape. In that case, they provide no protection against heavy weapons.

VPA fortifications. With some exceptions, treat Viet Minh earthworks as normal fortifications/entrenchments. This includes their approach trenches and captured French defenses if they have had time to improve them.

Worn Gun. Whenever a French tank fires its main gun, it may misfire.

VPA Anti-Tank Attack. The Viet Minh player may make an anti-tank attack by an offboard mountain howitzer. Roll d6 each turn. On a 4+ result, the VPA may take a long-range shot at a CEFEO tank. This mechanic could be used to replicate unseen bazooka attacks too.

Immobilization. The French Bisons suffered from several immobilizing factors, including enemy fire, barbed wire entanglements and mechanical breakdowns. Require tanks to undergo bogging checks each turn as if they are in rough terrain, even if they do not move. Otherwise, a tank loses its mobility on a roll of 1 on a d6.

Naval Pilots. French naval pilots had reputations for taking more risks than their Air Force brethren at Dien Bien Phu, so assign a bonus to any rolls for them to respond to mission requests.

VPA Anti-Aircraft. Viet Minh forces benefit from anti-aircraft protection in and around the main Dien Bien Phu battle areas. In addition to any on-table AA units, the VPA also has an off-board 37mm AA gun.