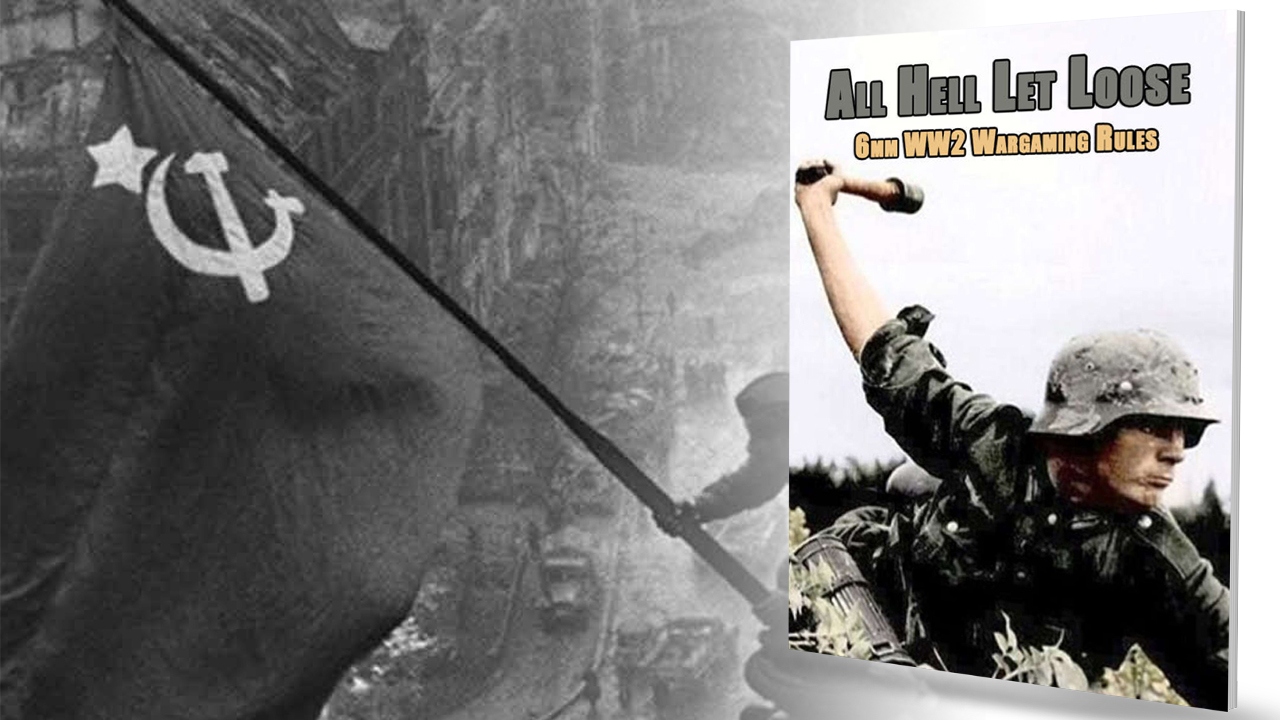 All Hell Let Loose is a new set of rules for World War 2 refights in 6mm or 1/285 scale, often called Micro Armour. Written by David Wasilewski, produced in hardback, and the size of an issue of Wargames Illustrated, the first thing you will notice is the pages feel thicker than standard – an unusual rather than off-putting element.

The book is split into well-defined chapters and contains a good number of photographs from World War 2 amongst the text. The actual introduction lets you know what you need; D6s, tape measure, tokens, and the usual figures and terrain. It also spells out the game’s ethos; this is not a ruleset for competitive games, there are no points, and it is designed to feel like the period rather than model it to the utmost.

The Units and Formations chapter presents the various standards in the game – what units are and what formations are. HQs are important, they cannot be killed but do limit the spread of your troops if you want to keep them under control. Formation Markers are a way of moving in a more strategic way, with secrecy brought into play with the use of dummy markers. Only once they are close enough to the enemy can troops be revealed. These troops can be attacked (unlike other games) and forced to deploy ‘properly’ earlier than the owning players might want. Though these are ‘advanced rules’ we suggest using dummy markers from the off!

Activations
The game has choices around activation – you can play I go you go, use random dice activation, or a combination of the two. You will not always be able to move everything though – each formation takes an activation check which can lead to a double, single or partial activation. They may even retire if they are damaged enough.

Resilience, Disorder, and Defence are how units can survive (or not) on the battlefield. Disorder measures the degree to which a unit is impacted, Resilience is how much disorder it can take, and Defence is the unit’s ability to avoid damage.

This section is well spaced out and has some nice tables, showing how movement and line of sight can be impacted. Line of sight is inextricably linked to terrain so pay attention here!

Firing is where the meat of the game lies. There are two types: Direct and Indirect. Only Direct fire can remove a unit, both types cause disorder when they hit. The other side of combat is Assaults, and aggressive generals should be cautious here because non-disordered defenders go first.

Ambush and Rally are simple to follow but the Artillery Rules, Indirect Fire, and Aircraft rules add extra complexity to proceedings. The end of the main rules covers Engineers and as a denouement you get unit keywords, little extra rules that impact units’s abilities for good or ill.

Four army lists in the book cover the British, US, German, and Soviet Armies from 1944 onwards followed by the unit stats.

The book ends with a quick reference sheet and a sheet of counters.

All Hell Let Loose is available to purchase from Wargames Vault