Danish and Norwegian Armies in the Napoleonic Wars 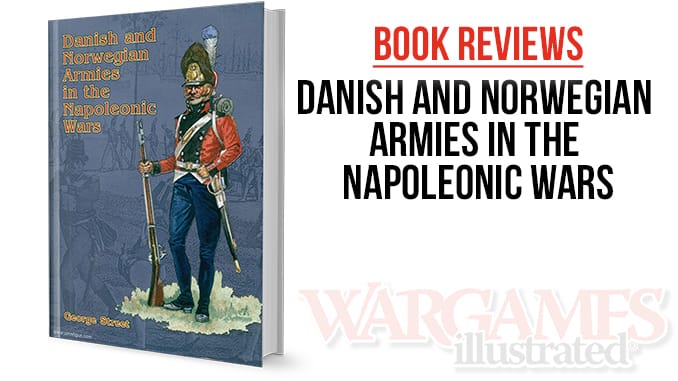 This is a real gem of a book, well researched and written in a very readable style by George Street, with 22 colour plates by the late great Bob Marrion and flags by Nick Buxey. The blurb on the inside cover of this book starts with: “While not, perhaps, one of the first nations that would be thought of as participating in the Napoleonic Wars, Denmark-Norway was a very important consideration in the status quo in the Baltic.” I have to admit I have never really considered, with my Anglo-centric interest, the importance of the Danish-Norwegian contribution to the Napoleonic Wars. True, they did not take part in the great battles but they fought – or could have fought, practically everyone from the British to the Spanish. Whilst often allied to the French, they were continually attempting to ally themselves with the various allied coalitions and maintain their independence in a world where smaller nations were dominated by the larger.

My first introduction to a Danish army was having my British thrashed in the late ‘80s by a Danish army with every second infantryman rifle armed. This book would have given me the ammunition to call foul! It covers organisation, uniform and deployment of both Danish and Norwegian troops in a very clear and well laid out way. However it is the brief history of their involvement in combat which has really enthused me, from stand up (if somewhat one-sided) battles, such as Køge against Wellington and an elite British force, to gunboat war against raiding forces from the Royal Navy, where there was a small scale action almost every day. It had me looking on the Perry Miniatures website for another project: who wouldn’t want to field ski troops in the Napoleonic wars? Highly recommended.