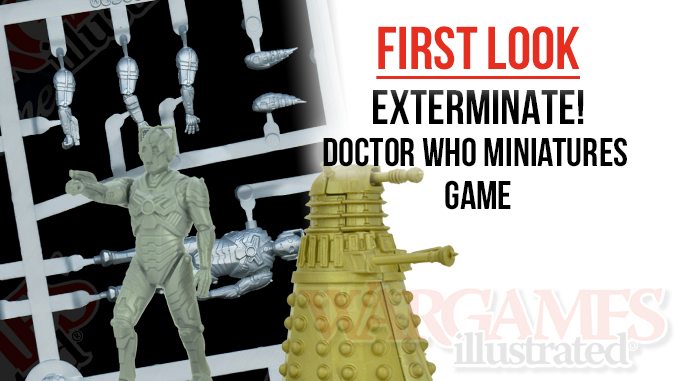 A while ago, we featured the ‘test shots’ of the new sprues for Exterminate!: The Doctor Who Miniatures Game. As the Into The Time Vortex family of games grows, the initial boxed set to be released contains 12 Daleks and Cybermen, plus 6 Cybermats. The boxed game also includes two sets of rules, a guide book, dice and all the cards needed to take part in Battles and Adventures across Time and Space.

Since we saw those initial gray Daleks, Warlord have been beavering away to produce coloured plastic versions of everyone’s favourite genocidal ‘pepperpots’ and one of their main adversaries, the Cybermen. The sprues shown here are the current production versions intended to be found in the boxed game.

The new version of the Dalek sprue now comes in a ‘bronze’ effect plastic, with each Dalek consisting of three easily assembled parts. In fact, the miniatures are designed to clip together, with each one taking only minutes to complete. Six Daleks may be assembled per sprue.

Meanwhile, the Cybermen are even easier to complete. Pick an arm, put the figure onto its base and you’re ready to play! This sprue also consists of six main miniatures but also comes with the opportunity to field three Cybermats, the rodent-like servants of the Cyber race.

Given the new colourization of the miniatures, it is now possible to use them straight out of the box without painting them. However, we’ve already been looking at methods to get an army painted up as quickly as possible, including experimentation with Army Painter paint washes.

The boxed game and an army expansion set for each of these two races is scheduled for an April release, around the time that Season 10 of the TV show will be available. At the time of writing, the BBC have yet to give their final approval for the game but, rest assured, we’ll endeavour to keep you up to date with more news when we have it.