D-Day Through German Eyes: How the Wehrmacht Lost France 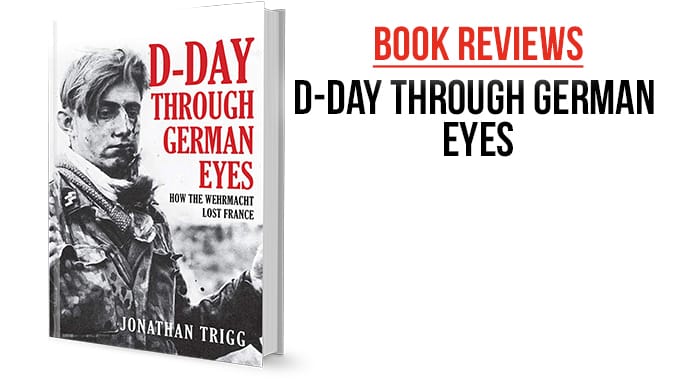 This is an interesting title from Jonathan Trigg.  A graduate from the Royal Military Academy, Sandhurst who served in the Royal Anglican Regiment in Northern Ireland, Bosnia and the Gulf, he has written other books on the slightly less mainstream aspects of the Second World War: Death of the Don and the Destruction of Germany’s allies on the Western Front.  There are libraries written on the Normandy invasion and subsequent campaign, however books written from the German side are relatively rare.  There is some discussion of the higher level strategy; the “Fortress Europe” concept, both in terms of the deployment of key formations throughout Europe, such as in Denmark and Norway, and within France.  The author is, as could be expected, disparaging of this dilution of available strength.  He also discusses the change in theoretical and actual strength of the reformed infantry divisions.  However it is it is at the sharp end of the battle where the book shows its real value to the wargamer.  At the experiential level, the eye witness views and feelings, the book is a feast.   The detail is excellent, the type and number of vehicles in a particular encounter, the effect of particular weapons and the understanding that the soldier on the ground that the average soldier or officer had of the tactical and strategic situation is very useful.  In fact some of the primary sources read like a novel and add real colour to a potential wargames scenario.  However it is at this point that a word of caution is appropriate.  Rigg makes much use of a similarly titled book: D DAY Through German Eyes – The Hidden Story of June 6th 1944 (D DAY Through German Eyes #1) by Holger Eckhertz.  Though an interesting read, there is a debate over the veracity, and accuracy of the translations, of the author’s source material.  However this should not detract from Rigg’s work which is a well-researched and well written book, extremely useful to a wargamer, seeking scenarios for Bolt Action or Chain of Command.  The German army, with its wealth of interesting and high quality equipment and the fighting ability is always a favourite and this book does nothing to detract from that view, but does put a bit of reality into the abstract view and brings to life all of the different troops who failed to defeat the allied effort to free Europe, to which this 75th anniversary year another level of poignancy is added, particularly as the number of veterans diminishes with time.