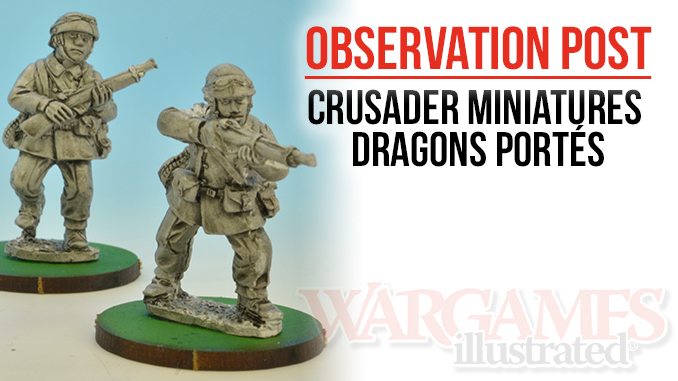 Always ready to add something unique to their ranges, the team behind North Star / Crusader Miniatures have come up with a number of models representing the motorcycle troops from the French Dragons Portés during the 1940 campaign against Germany. “Dragons Portés” (Portés means carried by a vehicle) was the motorized infantry found in the Division Légère Mécanique (DLM) and Division Légère de Cavalerie (DLC). Dragons Portes were regular units with a high morale, although the majority of frontline troopers had no real combat experience at the start of World War Two (some senior officers were often WWI veterans). Although the regiments were equipped with a range of different transport vehicles, the adoption of the motorcycle, often with a sidecar, allowed these troops to range far and wide across the battlefield. They can also be used as French motorcycle recce troops in other formations.

There are seven packs so far in the range, of which we received five for review. More are planned, including a VB Grenade Launcher and the possibility of some motorcycle and sidecar combinations as well.

The first pack is WWF050, four riflemen in issue motorcycle helmets of the time. Two of the figures are depicted advancing, one is reaching into his pouch to reload and the fourth is aiming his weapon.

The second pack is WWF051, four figures again, with three carrying their weapons and one aiming

WWF053 contains four figures armed with an unusual sub machine gun, the
Labora, created in Spain towards the end of the Civil War.

Lastly in this selection, we have WWF054, a command pack of officers and NCO’s armed with rifle or SMG. There’s a nice officer figure here consulting a map.

The other two packs are WWF060, a Hotchkiss Heavy Machine Gun with three kneeling crew and WWf061, a 60mm Mortar with three crew.

Overall, the sculpting is of the usual high quality from Mark Sims and the fact that North Star continues to provide unique units in 28mm size is always welcome.