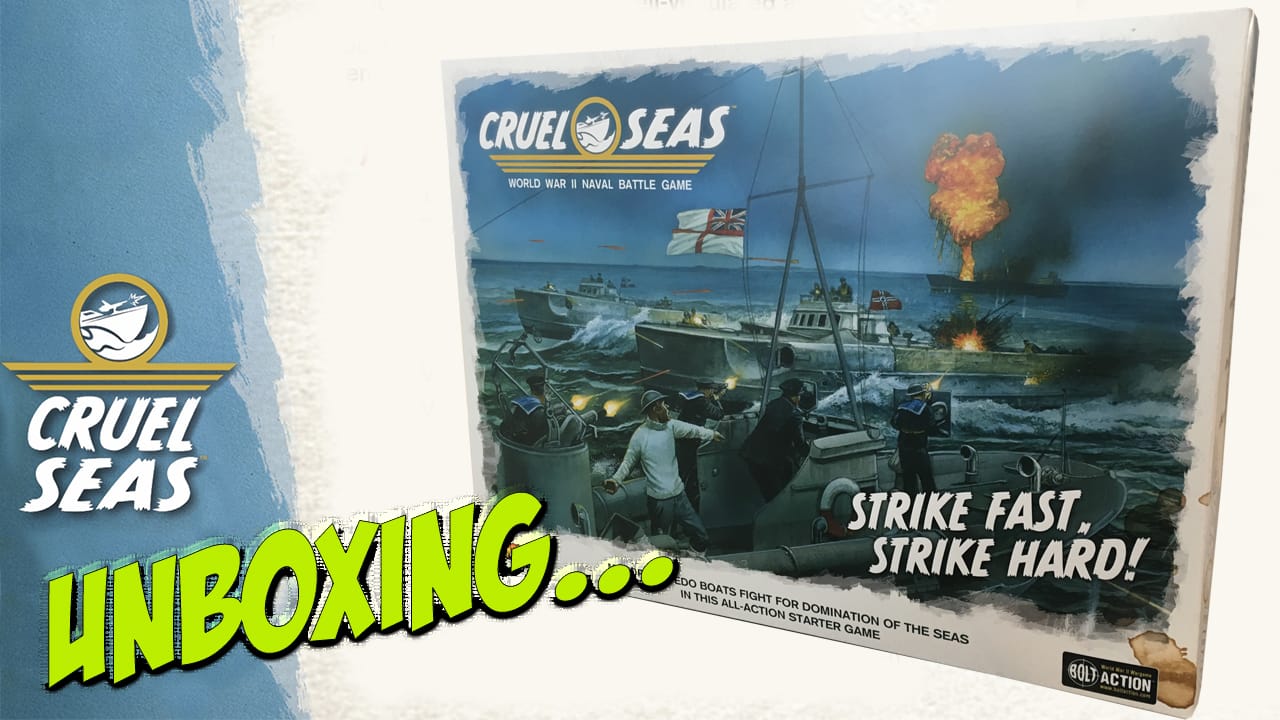 In this unboxing we are going to take a look at the contents of the soon to be released Strike Fast, Strike Hard!  Starter Set for Cruel Seas – the new World War Two naval battle game from Warlord Games.

The new Cruel Seas World War II naval battle game puts you on the bridge of some of the unsung heroes of the war at sea, the ‘little ships’ which fought around the coastlines of continents, countries and islands. The new starter set focusses upon battles between Royal Navy Motor Torpedo Boats and Kriegsmarine S-Boots, also known as E-Boats.

Lifting the lid off the box, the first thing you notice are the sprues. There are three grey plastic frames of Vosper MTB’s and two frames of S-Boots, two boats on each, with the option to field either early or late war versions of each. The last grey plastic frame contains 16 torpedo markers, which are essential in the game and are a devastating weapon. The last frame is made from blue translucent plastic, and contains 12 ‘plume’ markers, used to denote the near misses of heavier weaponry.

Next we have the ship datacards, enough for each of the plastic vessels, plus one for a typical, non-specific merchant ship, a Tanker, which provides gaming details for the 2D card version of the vessel found in the box. There are two sticker sheets, one full of the Royal Navy’s White Ensign and the other the Kriegsmarine’s battle flag. These are designed to be placed on the radio antenna or stern position. Next come the various dice, a plethora of D6 in two sizes and two different coloured D10, plus smoke and damage markers in the form of coloured cotton wool.

Going deeper, we have three punchboards of thin card, including the specialist speed markers which are placed beneath each ship. Next comes the double-sided paper playing mat, with one side the colour of the Atlantic Ocean and the other the Pacific. Heavier gauge card comes next, more punchboards consisting of double-sided 2D terrain of islands and coastal features, mines, the 2D tanker, a fortified bunker or coastal fort, shipwrecked sailors in the water or aboard a life raft and a British Beaufighter and JU-87 Stuka dive bomber. Lastly, there are the various tokens and movement and turning rulers. These are all usable in the game, in particular the terrain and other pieces which are used in some of the scenarios outlined in the rulebook.

The rulebook itself is to be found beneath the assembly and painting guide. This is a 108 page softcover book which covers both basic and advanced rules for using the ships, plus various options and scenarios that add to the gaming experience.

We’ll be offering an In-depth Flipthrough of the rulebook next Friday!

As we’ve come to expect from Warlord Games, this is a starter set box packed full of everything you need to get gaming. However, there are many expansions already available and more planned for future release, so by getting onboard right now, you can enter the realm of fast moving naval combat where the big ships fear to navigate!

The Cruel Seas Rules Showcase in the December issue of Wargames Illustrated, WI374.

And don’t forget there are FREE Cruel Seas boats bagged with the print issue of WI374 AND PT Boats or torpedoes with WI375, January.