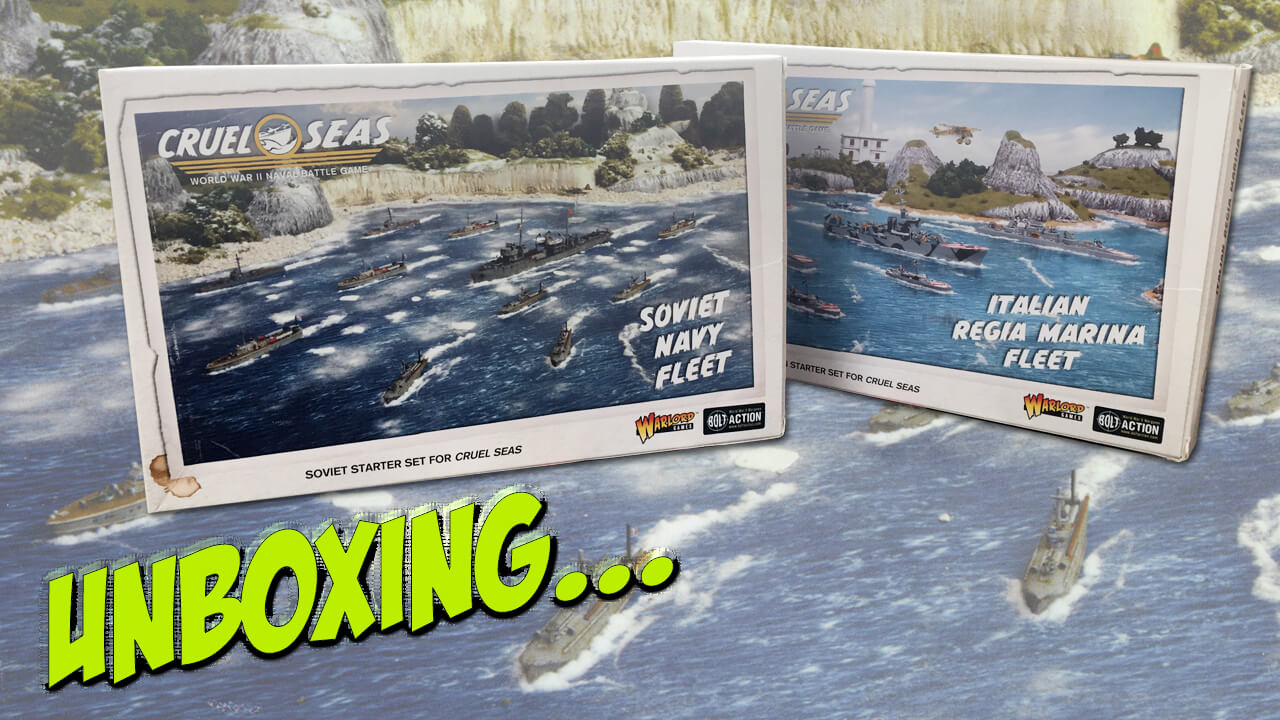 Warlord Games have produced fleets for two more nations to use with their Cruel Seas naval combat rules – the Italian and Soviets.

The Italian Starter Set offers 7 vessels from the Regia Marina, produced in resin or metal, with a mix of both for some ships. The Italian navy had some excellent ships, especially their smaller vessels such as the MAS torpedo boats.

The force is built around a single Gabbiano-class Corvette, a vessel bristling with guns and torpedo tubes which could bring them all to bear upon the enemy. The MZ-AFP and F-Lighter are both Italian made variants of a German design originally intended for the invasion of the UK. The Motozattera-AFP was a convoy escort with 88mm guns and lighter weapons suitable for ship-to-ship and anti-aircraft duty. The F-Lighter was an allied designation for a large landing craft which could carry up to three M13 /40 medium tanks and 100 fully equipped infantrymen.

The four MAS boats are the rough equivalent of the Vosper torpedo boats of the British Royal Navy, used in World War One and Two. They are less well armed than a Vosper, with only two torpedo tubes and either machine guns or a single light gun, but are very fast and useful when used in numbers.

In addition to all this naval goodness is a Cr.32 biplane, a fighter aircraft designed and built by Fiat that had done sterling service in the Spanish Civil War. Armed with two machine guns and able to carry a reasonable bomb payload, the Cr.32 is able to add its firepower to ship-to-ship combat.

The Soviet Navy Fleet starter set contains examples of Soviet vessels that don’t usually get much attention in gaming circles. First of all, there are 11 vessels in this fleet, spread between four different classes of ship, with metal and resin parts. The core of this fleet is a Fugas-class Minesweeper, a vessel of an older design but one which packs a decent deck gun forward and lighter weapons for anti-aircraft guns.

There are four G-5 and four D-3 Motor Torpedo Boats included. The G-5 is based on a British WW1 design and was made of aluminum, which was prone to sea water corrosion. It has two torpedoes, launched from the sides by dropping them into the water and two 12.7mm machine guns, one in a turret forward and the other in the bridge area. The D-3 was a much more modern design, made of wood, and actually very fast. It had two torpedo tube launchers and was armed with either two 12.7mm machine guns or one 25mm forward gun.

The two Pr.1125 Bronekater ‘ships’ are real oddities – they were armoured barges which had a low-lying hull design. Intended for use in rivers, the Pr.1125 sported steel armour and was laden down with weapons, including T-34 tank turrets! Although it was a slow moving vessel, it had one main advantage – its shallow draft meant it was immune to torpedo attacks.

Lastly, there are two Il-2 Sturmovik ground attack aircraft, able to carry a heavy payload of bombs and armoured enough to resist most enemy fire. Nicknamed the ‘Flying Tank’, it seems appropriate that it is included in a fleet for anti-ship actions.

Both fleets come with all the relevant data cards and suitable wake sheets for the contents. Also included are torpedo, damage and plume markers, plus a flag sheet for the relevant navy.  The miniatures are well cast and the overall fleets offer good value for money for those looking to get started with some different fleets, aiming to be more ‘daring’ rather than sticking with the ‘classic’ options. Who doesn’t want a heavily armed, low silhouette armoured gun platform or a super fast MTB?