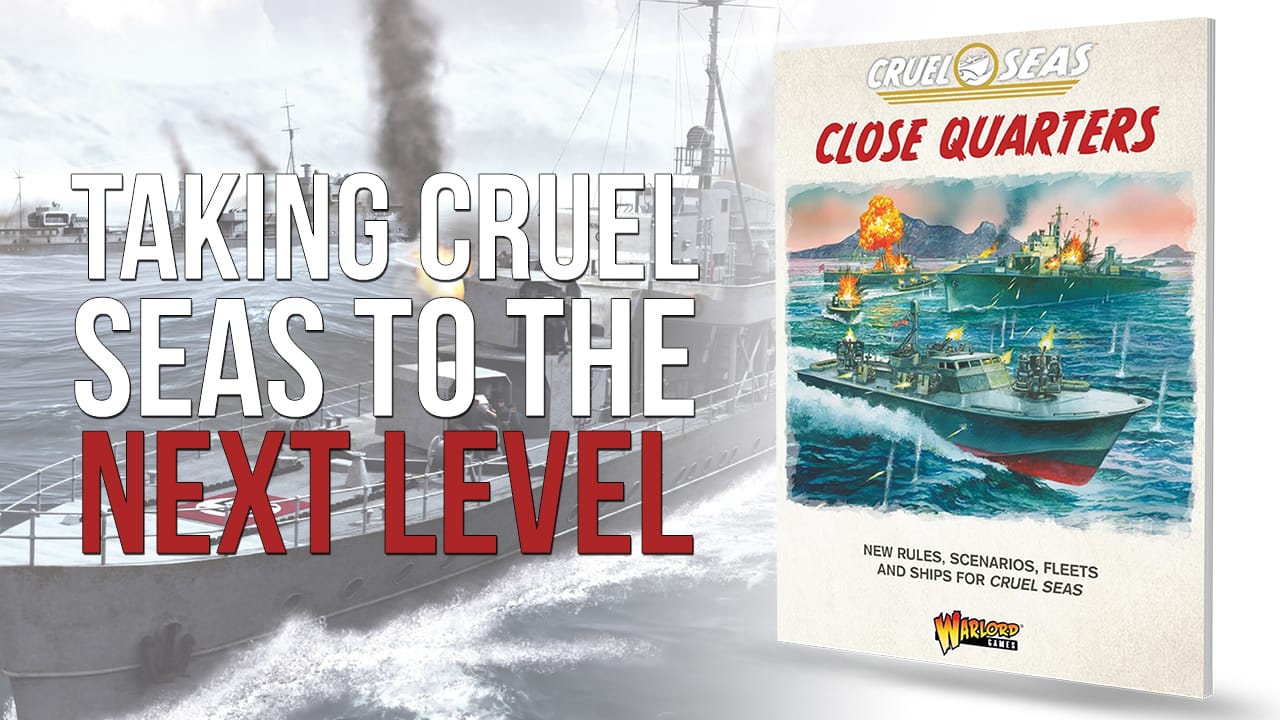 October 2018 saw the release of the small flotilla naval game Cruel Seas, by Warlord Games, one massive errata sheet later, as well as an array of splendid model boats and accessories and here comes the release of the first published supplement – Close Quarters.

‘New Rules, scenarios, fleets and ships’ is what the cover proclaims we will find inside, so let’s take a look.

We begin with a ‘Scenario Generator’ aimed at providing time-poor players with an easy way of conjuring up ‘what if’ Cruel Seas scenarios without the need to do any research. Whilst potentially very useful, rolling on a table to randomly select that you are, for example going to be playing the US Navy with a Heavy Gun Boat may not be very appealing if you have no US Navy Heavy Gun Boat models, but as the text points out simply ‘roll again’.

The Scenario Generator covers everything from nation selection to the background for the scenario e.g. intercepting a message from a secret agent.

Beyond the non-historical scenarios generated by the Scenario Generator, we have, Historical Scenarios – a collection of 11 different game settings and rules across five different theatres of operation: the Baltic Sea, Lake Ladoga, the Pacific Ocean, the English Channel and the Mediterranean. Each scenario includes background information on the different theatres, plus specific information relevant  to the game suggested, followed by Objective, Deployment, Map, Special Rules, Game length and Victory info – all very familiar thanks to the scenarios in the original rule book.

Evident thought, time and effort has been put into all the scenarios which will hopefully play as well as they read.

From the Historical Scenarios we are straight (without any ceremonial introduction), into the Additional Ship Rosters. Each nation’s roster introduces new ships into the rules. These include types of vessels; like the Fairmile C MGB and specific named ships like the HMS Montgomery.

Cruel Seas players who are looking to expand their fleets and gaming options will be very well served by these rosters which can’t help but inject more colour into existing CS flotillas. Two new nations are also brought into the game in the form of The Yugoslav Partisan Tiger Fleet and the Finnish Navy.

There was always an obvious appeal in using Cruel Seas for combined arms operations with other World War Two games, most obviously Bolt Action, and it seems that’s where the next section – Invasion Rules – would be most useful. Here the transport capacity of vessels along with rules for ‘hitting the beach’ and ‘coastal defences’ are also included.

As mentioned, Bolt Action would seem to be an obvious next step once your invasion force have landed (although landing 250 troops from the Prince Leopold might be above Bolt Action’s remit), but there are ultra-simple rules in this section for Land Combat should you wish to use them.

We then move on to ‘Expanded Aviation Rules’, which, at the risk of stating the obvious expand on the air-to-surface rules in the original game. These new rules bring in two types of attack: strafe e.g. machine guns and ordnance e.g. bombs.

Most of this section is taken up with roster lists for the different planes of the different nations, which give details on the type of plane and the weapons it uses.

This is all good stuff for Cruel Seas players looking to expand on in-game sea-to-air operations.

Although rules for submarine warfare can already be found and downloaded for free from the Warlord website in the form of the ‘Run Silent. Run Deep’ PDF, this next section of ‘Close Quarters’ includes some cut down rules of submarine warfare in the game that claim to be “rather abstracted in order to avoid slowing down what should be a game of fast attack”.

They do however cover everything I would have thought necessary, including background information on the underwater activities of the main nations, hunting submarines, a ‘Submersibles Roster’ and the use of ‘Human Torpedoes’.

And there you have Close Quarters from beginning to end.

In keeping with all Warlord Games publications this book feels good in the hand and is great to look at. The reader shouldn’t underestimate the time and effort the design team put into creating the look and mainly the photographs for these publications, and it shows, with Close Quarters being packed with clear and inspiring photographs. The inclusion of ‘sidebars’ of naval anecdotes is also a nice addition providing an interesting respite from the rules.

If you are already a keen Cruel Seas player Close Quarters will undoubtably provide you with several appealing options to ‘push on’ with the game. All the scenarios, stats for new vessels, aeroplanes and submersibles are clearly well designed and presented, and whilst the invasion and some of the scenario generation rules aren’t going to see the light of day for most gamers, this book has very little fluff and lots of meaty useful material.