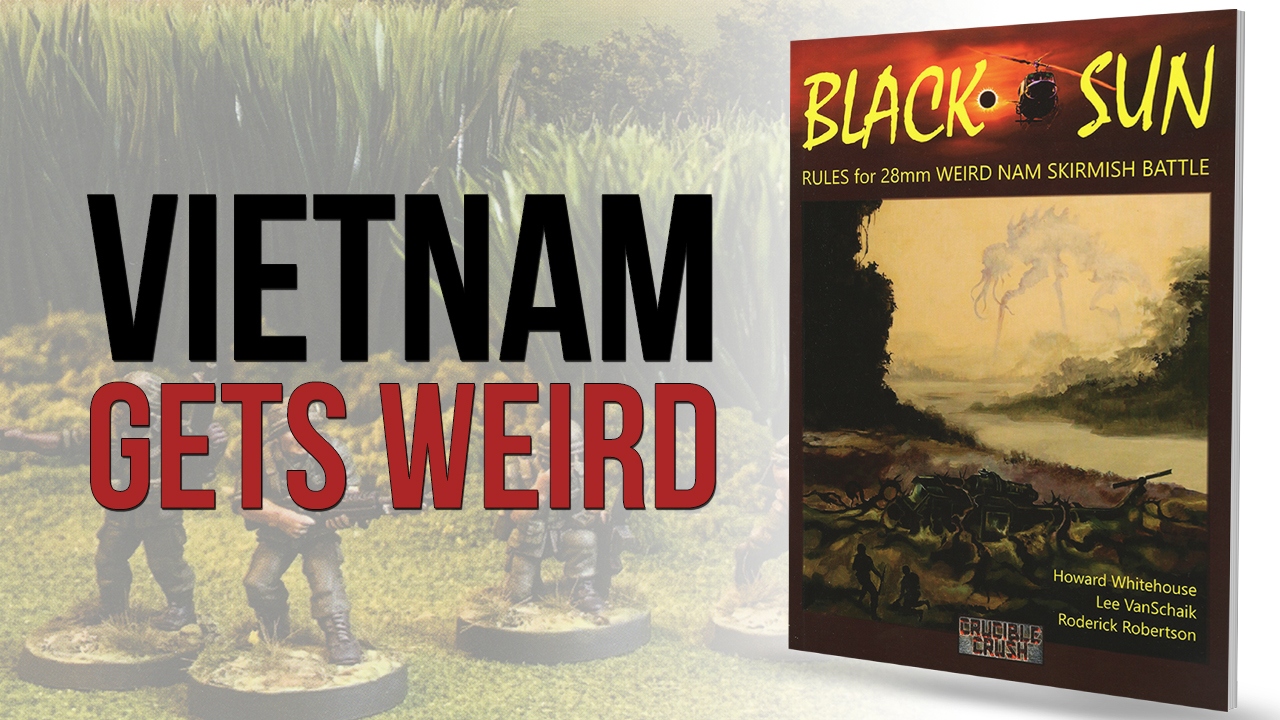 We’re flipping through Crucible Crush’s Black Sun – a new 64-page softback alternate dimension ‘weird Nam’ skirmish game. One look at the cover tells you that all’s not as it should be in the jungles of Cambodia! Looking at that titanic beast in the fog has us adding a T for Truly to the FUBAR that Vietnam as we know it was was!

Below is a transcript of the video, for those who prefer to read than watch

The opening pages introduce the alternate dimension of Black Sun and the basic elements of the games you’ll play within it. The dice mechanics immediately stood out to us – successes in Black Sun come through rolling equal to or less than the target amount on a D6. To our “Huzzah, lots of sixes!” brains a ‘low roll is good’ mechanic is jarring. It could, however, be argued it’s a wonderfully thematic representation of the twisted and pessimistic disaster-world of Black Sun.

Pages 3 and 4 detail forces, with Heroes leading the way and Squaddies doing the grunt work. Everything is illustrated with photos of Crucible Crush models – either individually or mid-game – and they generally look very nice, whetting the appetite to get involved in the world. Models are formed into Groups, each led by a Hero, and your leader’s force card shows a Points total that is spent building your Squad.

Page 5 details the primary characteristics of models in the game, particularly the 4Fs:

This is a game where the trauma of battle (and the bizarre elements of Black Sun’s world) play a huge part, and the stats of models have lots of mechanics tied to that. On page 7 there’s a handy example of how to create a US Army Squad to round the section out.

Next it’s onto the rules proper and the intriguing Activation possibilities of Black Sun. A D6 roll is cross-referenced with an activation table and, depending on your force structure, will allow you to activate various Groups within your Squad. We like the tactical considerations this creates – a Force could be made up of a small number of Groups and activate regularly but with minimal flexibility. It could be made up of many Groups, but some may not activate and will be easily overwhelmed. Risk and reward balancing like this brings depth and extended playability.

Once activated Groups can perform a wide range of actions, from standard ones (moving, shooting, and charging) to more ‘cinematic’ actions such as binding wounds or leaping through windows.

Page 11 brings in one of the game’s unique selling points – the “What the..?!” cards that are drawn whenever a 6 is rolled for activation. There are positives in this deck, such as finding a Weapon Stash, but they’re mostly inconvenient (a broken weapon) to downright unpleasant (being attacked by a hazardous organism). The cards themselves are at the back of the book, so we’ll get to them later.

Activation’s rounded out with rules for Reactions – a break in the usual sequence where the opponent can interrupt and shoot.

Movement is covered between pages 12 and 15 – largely what you’d expect but with the distance moved determined by dice rolls and Observation included to bring a ‘fog of war’ element to proceedings.

Shooting – pages 15 to 23 – details the varied ways that your Squads can use ranged weapons to either injure or suppress your opponent. At its core it is a simple D6 with modifiers roll but there are neat extras. Weapon jams occur if more 6s are rolled than successes and cumulative wounds gradually diminish effectiveness. Special weapons are detailed too – Grenades, Mortars, and Flame Throwers.

Between pages 24 and 28 things get up close and personal; close combat’s basic mechanics are largely what you’d expect with added extras such as Defensive Fire, bonus hits if 1s are rolled, and a Nerve Test used to determine the victor.

The rules round out with Victory Points and Advanced Rules such as swimming, night actions, rain and fog on pages 29 and 30.

Next it’s Factions and there’s the standard US Army and Vietcong factions you’d expect, then the weird enters Weird Nam! Adaro (Lizardy fishmen with guns), Fury Bugs (swarming hordes of teeth, chitin and fangs), Children of Hastur (hippie freedom fighters), and Deutsche L.I.G. (former Third Reich members and scientists) round out the roster.

Pages 33 to 35 detail three scenarios, illustrated by maps, then the book delves into the background of Black Sun and its factions in far more detail. This is a weighty section across pages 36 to 48 and the look of the book gets… eclectic! From atmospheric diorama style photos to digital renders through to what look to be a royalty free photos there’s a bit of a dip in consistency compared to the first half of the book’s excellent miniature photos and in-game scenes.

Details for using Hueys are the culmination of the rules on pages 50 and 51 and the photos here really show what the team can achieve. We’re particularly taken with the depth in that final image – very atmospheric!

The rest of the pages are gameplay aids – useful reference sheets, the cards you’ll need to build your Faction, templates, and the “What the..?!” deck. You won’t be able to cut these out and use them because different cards are on the different page sides – a bit of an issue that will require you to make a colour copy of these to get gaming – but not the end of the world.

And that’s it! Black Sun’s an appealing alternative to Vietnam gaming and should appeal to anyone who likes their wargaming weird. There’s lots that intrigues us in this book and we’re excited to see where things progress to in this alternate reality.