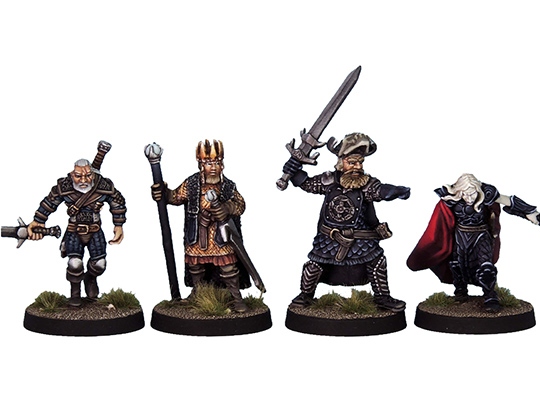 We’ve got all sorts of smashing new 7TV: Fantasy stuff to look at over the next couple of weeks and to start things off we’re reviewing two new sets of figures – Fantasy Stars and Skeleton Command.

Fantasy Stars
The four figures in the Fantasy Stars set cost £4 each ($5.65 US) but you can save a whole pound by buying them altogether. With minis that look this cool, we’re going to guess many 7TV fans will have an extra quid in their pocket after making a combo purchase!

Three of the figures are one-part casts while the Tragic Hero has a separate left arm. They come with slotta tabs and 25mm round bases are included. The tab on the Monster Hunter is a little troublesome, needing a feed trimming off it and the end snipping away to enable him to fit in the centre of the base. This wasn’t tricky but as it is the only manufacturing ‘error’ we encountered we thought it was worth mentioning. The casts are very clean and really carry across the detail of these fine-looking sculpts. The figures are 28mm scale but Vicious Henchman is a big chap, more like 32mm scale.

Each figure in the set represents a fantasy archetype and their designs take influence from existing worlds to create some really pretty and familiar (to varying degrees) looking characters.

Vicious Henchman might be the standout figure in a great set – his over the top armour, lofted skull helm, and frankly, daft sword he wields are all just right for the camp fantasy-style 7TV revels in! It’s only fair that this reviewer admits to adoring the George Lucas/Ron Howard fantasy film Willow as a young ‘un. The resemblance of Vicious Henchman to that film’s baddie General Kael is striking and nostalgia like this is exactly what this set is going for. But it’s nostalgia done really well – these figures are splendid with layers of detail.

Let’s go back to the price per figure now we’ve gushed about the quality – £4 or less for an extremely well sculpted, stand-alone, fantasy character model. Many other companies would charge much more for the same offering so this feels like an absolute bargain!

Skeleton Command
The same pricing deal for these figures – £4 each or £15 for the set – and while they’re not as chunky or character-heavy as the Fantasy Stars (and thus feel a little less like an absolute steal) they’re still a very fair price for smashing quality.

The ‘basic’ skeletons represent a standard-bearer and musician and have an old school kind of look to them – one we have no doubt is deliberate. These undead visited the Ray Harryhausen School of Stop-Motion Shambling! We’ll even forgive the breathless skeleton blowing his instrument as it’s probably a nod to older figures doing the same.

The other two figures in the set feature a lot more detail and will make for great character models. All figures are one piece, by the way!

In heavy plate armour, swinging a huge two-handed sword, and with a crown atop his bearded skull, there’s no doubt that this armoured skeleton will make a terrific looking lich or king of the dead. Our cast had a slight gap under one eye socket that would need filling to match the box art but actually – due to skulls being prone to breaking down – looked quite fitting.

The final figure is a female necromancer whose painfully thin limbs and gaunt features give her an uncanny look that feels just right. This one’s in a cracking pose, creating an intriguing silhouette with an “Alas, poor Yorick.” element. She is of the “look at my sexy dead flesh” which will have differing levels of appeal depending on her purpose in-game and how much you want your anorexic vampire-like villain to have a butt that’d make Nicki Minaj jealous.

In all, it’s another excellent set of figures and well worth considering if for 7TV fun or to slip into an undead army for pretty much any game system.