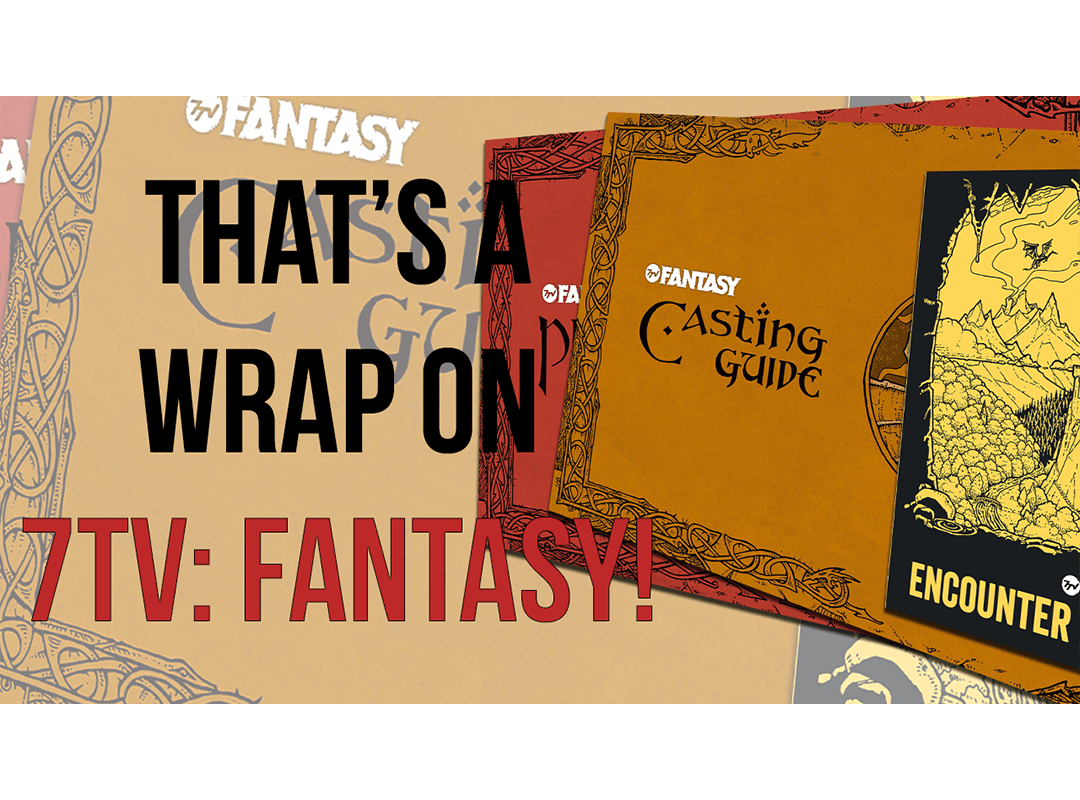 We’ve already unboxed 7TV: Fantasy and given its Director’s Guide a flipthrough – you can find those videos on our website and/or YouTube channel. Here we’re completing our video trilogy with The Return of the King … wait … sorry, that’s not it … with the Producers, Casting, and Encounter Guides!

The Producer’s Guide is a softback, landscape format, full-colour, 32-page book. It presents the very cool background that’s been created for the cinema world that 7TV’s set in. Fantasy film producer Donatella De Lorenzo and her studio Minerva Avventure are presented. These are the game’s chosen setting for your productions and if you want to include them in your gaming they’ll provide the meta-narrative – you’ll make new productions to join the Minerva Avventure catalogue. The nods to classic fantasy films here – in the writing and visuals – will be enjoyed by anyone who has a love of classic fantasy cinema!

With Lights… Camera… Action! the book describes the chapter-based gameplay of 7TV: Fantasy. Each chapter is the game’s equivalent of a scenario, with a casting call representing the choice of characters on the opposing sides. Once that’s done a scenario/chapter, along with its film theme, is ready to go.

The Prologue section gives you a step by step run-through of everything you need to do pre-game, all the way up to the first initiative roll. That starts with deciding the chapter (either choosing or rolling for a random option), deciding the attacker and defender, and the optional addition of extra encounters (covered in the Encounter Guide). You go on to place objectives and the optional McGuffin, then get down to placing your models on the board, starting with non-sneaky ones, then sneaky to follow. With that done a trilogy deck is made, as covered in the Director’s Guide, Artifacts are handed out, and players roll off for initiative.

The chapter’s end with either one player’s cast all out of play, no trilogy cards remaining, or specific chapter end conditions being met, and the level of victory is then determined by the difference in victory points. Nothing too wild here, but the chapters themselves are good and varied. There’s a standard Battle, of course, but it’s things like The Race (a rush to deliver a message of great import) and The Theft (where one side is attempting to transport a precious object that the other must steal, or perhaps a raid on a sorcerer’s tower for a special artifact).

The rest of the book moves to the Minerva archives and looks at some of the studio’s invented Classic Features. These are a wonderful collection of familiar-sounding film (and thus gaming) options with a fantastic amount of background text and tabletop battle suggestions. To make playing these practical the Set Dressing section of each production suggests elements in the Encounter Guide that you can apply to your games to get the right kind of theme.

Onwards, brave heroes (and nasty villains) to the Casting Guide – the same format as before but 44 pages long. This book is not, as we initially expected, about magic. The casting type here is creating a cast of heroes or villains for your 7TV production.

Each player uses Ratings to buy a cast for the game. These are listed for each character, the Stars, Co-Stars, or Extras, and a basic starting cast might only cost 20 ratings, but an epic cast (and epic game) could go up to 100.

The game offers an Open casting option where you mix and match choices but with the following restriction – only extras from the same genre as your Star and Co-Star may be included. This keeps things from getting too wacky and is a neat little way to offer much versatility within a somewhat controlled system. Each genre gets its own symbol – Epic Fantasy, Folktale, Historical Fantasy, Mythic Fantasy, Pen & Paper Fantasy, and Sword & Sorcery. That’s a good range that has allowed 7TV: Fantasy’s creators to pull on a really wide choice of fantasy classics. Those symbols are presented on each of the cards included in the game too.

The majority of the Guide is used to list background details on the 230 Star, Co-Star, and Extra options in the game. This is brief per character but adds that much-needed flavour that wouldn’t fit onto the already busy cards. It’s all written to be read in a booming voice and feels like the sort of condensed text you’d get in a roleplaying game (either pen and paper or video game) to let you know the sort of character archetype you’re choosing. It takes in the Heroic and Villainous Stars and Co-Stars first, then the numerous Heroic Extras – 27 in all – and the, even more, numerous Villainous Extras – a whopping 62 of them! Things round out with over 100 Neutral Extras. That’s a truly delicious buffet of choice.

Did your desired Star or Co-Star somehow get missed from the call sheet? Then create them by modifying any of the existing ones, using this welcome extra page of guidance.

There’s a comprehensive list of special effects at the back of the guide – abilities some models can use, essentially.

Finally, there are tables that list the genres each character fits into, making cross-referencing wonderfully easy, and a unit leader table that will help you put cohesive groups of Stars and Extras together.

The fourth book is the Encounter Guide and it has a different format. It’s a dinky little A5, portrait, full-colour, 36-page book.

This is where you can add an absolutely exhaustive load of modifiers to your gaming, suited to your chosen cinematic style and world. It starts with an intro, lists which genres each of its encounters is suitable for, describes wandering monsters (NPC type extras who can cause game difficulties), then dives in with masses of options.

What initially looked like a black, white, and yellow only tome is suddenly given a bright splash of character with one of many smashing scenic shots, showcasing the best of gaming fun you could create for the chosen encounter. So, Adventurer’s Camp has a huge dragon wandering across the riverside tent that the cast has set up. Alongside it are rules covering the incorporation of the encounter into your game, done via the use of templates, cards, tables, and more. Each of the encounters has its own distinct theme and feel and will bring many a smile to the faces of fantasy aficionados as they are both reminded of fantasy favourites and given a chance to play them out. From the pestilent bog terrain and effects of the Deathly Marshes, through the Labyrinth’s underground entrances, treasures, and deadly guardian monster, to the Tavern Crawl and its inevitable drunken brawl, there are loads to enjoy here. The photo accompanying The Ritual was especially nostalgic to us and shows the sort of attention to detail that Crooked Dice and Edge Hill University Press have lavished on the presentation of their latest game.

And that’s the lot – an exciting treasure trove of fantasy options for your gaming fun.