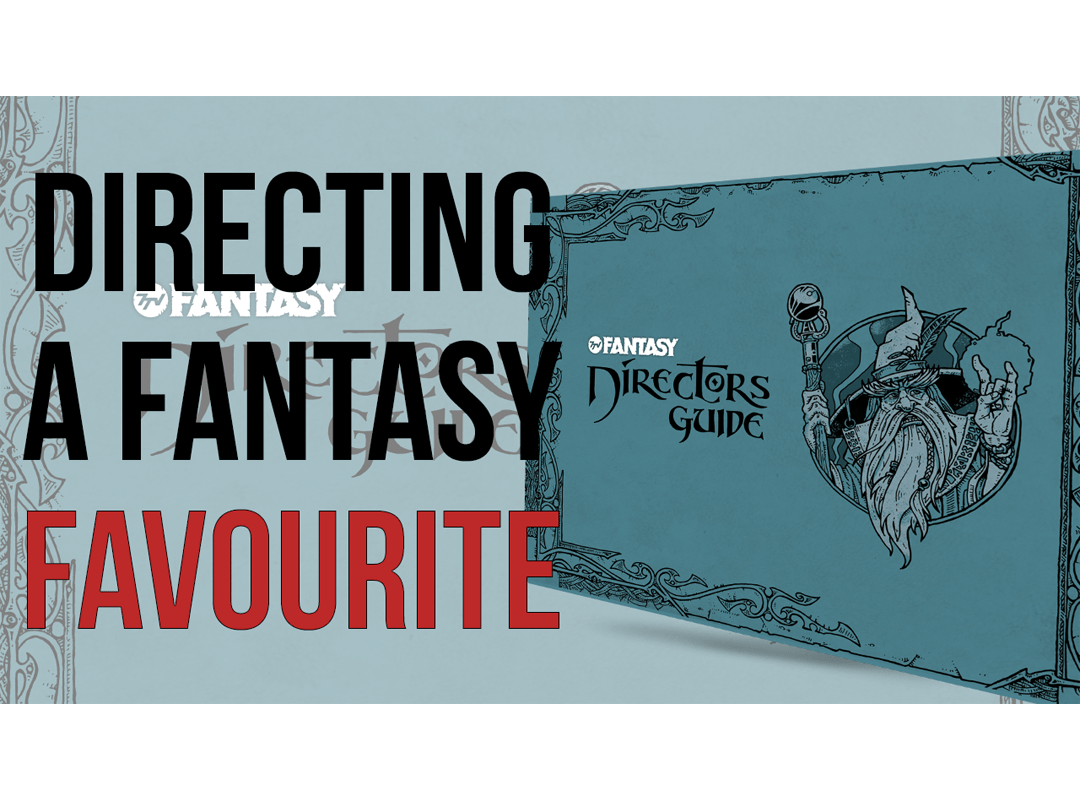 Four different books come in the 7TV: Fantasy box and cover all you need to play the game. In this video we’re going to flip through the main one for the actual rules – the Director’s Guide – and highlight the key gameplay and background elements in this new fantasy skirmish offering from Crooked Dice and Edge Hill University Press.

The Director’s Guide is listed as the first volume of the four books and that’s because you’ll learn all of 7TV: Fantasy’s core rules from it. It’s a great looking, softback, landscape format, full-colour, 42-page book.

There’s a brief welcome that defines what 7TV: Fantasy is – in short, a way to play games that are set in pretty much any fantasy genre you can think of. After that, it gets into what is special about the 7TV system – the metagame that goes beyond just playing a fantasy scenario and into the making of a movie or television show. This can be as big a part of your overall narrative as you want – we like it as a way to really mix things up and it remains 7TV’s main unique selling point.

It’s worth mentioning that while this is a stand-alone product it will be familiar to anyone who has checked out the second edition rules from 7TV already, but with some fantasy extras.

The Guide gets into gameplay basics, starting with a breakdown of base sizes (squares and rounds are both fine and come in different dimensions for different sizes of characters) and then dice rolls get defined. These are always on D6s and the standard system is that you combine the number of dice you roll to get a total. These are called simple rolls but there are also boostable rolls. For boostable rolls, you take the highest result from your dice pool and add a +1 for every other dice that was a 4 or more. At times in the game, you may also need to make a statistic test – that will require rolling against a basic table. It’s all simple stuff and will quickly become second nature when you get gaming. As dice rolls are at the core of much of the game’s actions, we think it’s good that they’re placed prominently at the start in their own section too.

Plot points are what another game might call action points and these are how you essentially drive your cast of characters around the board and perform various tasks. Throughout the rules they’re represented by a star symbol and 7TV: Fantasy keeps its rules clean by using little refinements like this in its layout. Good stuff.

The Guide gets into profiles next – we talk about these in our unboxing so head on over there if you want more specific details. We’ll take the chance to reinforce the compliment we just gave to the layout by adding that there are some really great photos in the book. Look at these stop-motion type monsters duking it out!

Much of the rest of the Guide gets into the Fundamentals, going through the structure of the game and how the components are used within it. Each turn has three phases – the Trilogy Phase, the Action Phase, and the End Phase. The active side during these phases is referred to as ‘on screen’ – one of many touches that reflect the cinematic metaverse.

The Trilogy Phase uses the game’s Trilogy cards to generate ‘acts’ and these will determine the length of gameplay overall. How many Trilogy cards are used is determined by the table size. The first act tends to movement and getting in position, the second act is more where attacks get going, and the finale is when more impactful and game-changing moments happen. The Trilogy Deck’s cards are designed to play into this, giving little boosts to characters under certain circumstances and always with some thematic name or description. It’s a neat way of bringing the narrative and gameplay practicalities together.

Many of the specific rules are covered in the Action Phase section, running from page 18 to 29. Those actions are divided into move, strike, special, and free actions and each gets their own sub-chapter. Models are activated using their plot points and players can also spend plot points to remove negative statuses.

As a good quality skirmish game demands, especially a cinematic one, there are many movement options, described and defined clearly. Thanks to the solid layout throughout this book (and the other Guides) you’ll be able to scan pages quickly and easily. There are more great and thematic photos of figure setups too, with tongue in cheek captions.

Strikes are made to determine combat and follow a simple procedure for all of the different attacks available to models. A target (or targets) are picked, line of sight and range determined, then a strike is made against each of the available targets.

For these strikes a defence roll is made first, then the attacker must make a strike roll that equals or exceeds that defence roll. This is (engage air quotes) ‘backwards’ compared to the more standard order of taking hits then seeing if saves are made. We quite like it because it determines the drama – the active player will always be given the potential (through chance) to do something highly unlikely for good or bad. It manages to feel a bit more cinematic because of this.

There are various modifiers that can apply to these actions, listed on the relevant character cards. It’s all summed up in simple illustrations in the Guide, while the associated text details the extra details. That’s true of the defence roll and the strike roll. Different modifiers apply to each and in the case of the strike roll, the Guide shows a specific attack type from the card of one of the game’s Villainous Stars.

The Action Phase’s details wrap up with Special, Free, and Passive actions. These are things like character-specific activations that can happen out of combat or the Star Qualities actions that only Stars and Co-Stars have. These are activated by spending the required Plot Points listed and are away the game makes those characters feel extra special.

The End Phase is when you determine if you can continue gaming with your remaining cast, deal with status effects, or ‘Steal the scene’ – that’s a once per game option for each player that allows them to take the momentum into an instant extra turn, where they have the initiative.

Statuses are detailed through the end of this section with symbols that match up with the MDF tokens included in the game getting detailed. There’s stuff you’d expect in skirmish gaming – Stunned, Poisoned, etc. – but there’s also some more unique stuff such as Captured or Dominated. The former gives more story drama while the latter offering up a shift of allegiance as if a model has been charmed to fight against their former friends.

To finish this guide there’s a look at the different sort of attacks you can make. These broadly fall largely into the categories of fight, shoot, and presence. Presence is a new attack for 7TV: Fantasy that represents more of a short-range and often more quirky and non-standard attack. Grizzled Cynicism, for example, will not do damage but will distract the target, softening them up for the next attack.

There’s magic too, detailed in six Grimoires that contain all of the spell casting coolness we can imagine – healing, conjuring, natural, demonic, necromantic, and illusion. Things round out with artefacts – the magic trinket type options so common in fantasy screenplays – and an example turn that lets you follow exactly how the game works.

That’s a lot to squeeze into one relatively low page count book but it’s all done very well. It looks good, it reads well, and it’s extremely easy to go from Guide to tabletop gaming. Throw in the Producer’s Guide for scenarios (called chapters in the world of 7TV), the casting guide for the creation of your cast of gaming Stars, Co-Stars, and Extras, and the Encounter Guide for tons of extra gaming modifiers and you’re ready to play an infinite number of fantasy productions. We’ll have the flip of those other books up very soon!