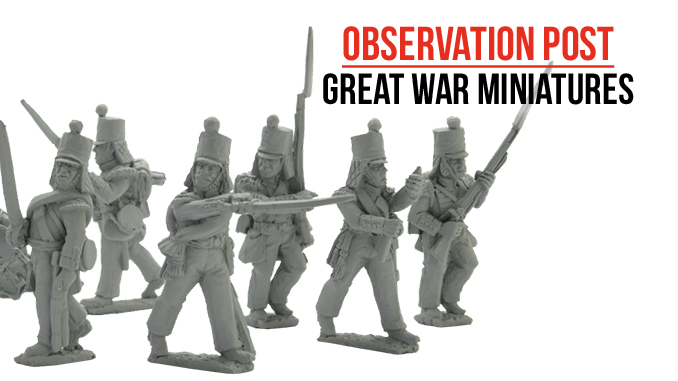 Great War Miniatures already have an extensive Crimean War range in 28mm and we have received some new releases to bolster your British army. These miniatures represent the 21st, or Royal North British Fusiliers, who were the only regiment in the campaign to be issued covers for their shakos that included a quilted Havelock style neck cloth.

Included with our review pack are two officers, one with sword extended, leading the way, and the other with sword upright and looking along the line of his brave lads. Also included is an NCO with his Sergeant stripes and NCO sash clearly visible on the miniature, again posed looking along the line and directing the men. The drummer is carrying his drum, rather than playing it, and the designer has gone to the trouble of casting all of the lace decoration onto the sleeves and coat of the miniature for you. Having just finished painting British drummers for another period, painting the chevron lace on the sleeves and coat was a nuisance, and seeing it cast in a manner that allows washing techniques and dry brushing to lift it is a delight.

There are two different standard bearers, cast with very determined looks on their faces, and three different private soldiers, all in advancing poses. Again, their facial expressions are great, with a really determined look to go with their mutton chop side burns.

Overall, this is an excellent range. The quilting on the Havelock covers is clearly visible whilst there is excellent detail on the buttons on the tunics, the ammo pouches and backpacks. These figures will be a pleasure for anyone to paint and will look great in any Crimean War army. If you haven’t already got the 21st, now is the time.