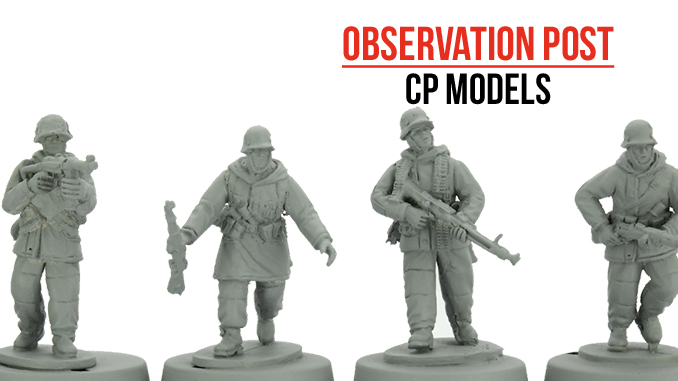 CP Models is one of those companies that has a wide variety of figure ranges. One of these is TQD Castings, which includes a number of packs in 20mm scale which covers the Battle of Kharkov 1942 – 43.

The packs chosen for review are taken from the German range.  TQD-GSK21 contains 5 figures designed to represent a group of Waffen SS grenadiers advancing. They are wearing winter smocks and quilted trousers and are armed with a variety of weapons, mostly KAR 98K rifles and an MP40. Also included in the squad is a figure carrying an MG42. One of the riflemen carries a spare MG42 barrel in a pouch across his back. The movement in the miniatures is well-defined, and the attention to detail in terms of equipment and uniform is nicely done.

The second pack is TQD-GSK06, representing a trios of SS command figures. One of these includes a figure intended to be Obersturmbannfuhrer Hubert Meyer, a regimental commander during the Third Battle of Kharkov. He wears an officer’s cap and a quilted uniform. The two other figures wear the winter smocks and trousers that were issued, with one in a typical helmet smoking a cigarette and the other using binoculars. The figure with the binoculars is carrying a Soviet-made PPsh sub machine gun, typical amongst many German troops on the Eastern Front.

These are just two packs from an interesting range that is said to be 20mm but would fit very well with 1/72nd model kits. The figures are approximately 21mm from foot to eye.  A good browse around the CP Models website will shine a light upon a whole number of hidden gems, in both 20 and 28mm, and across a number of genres.