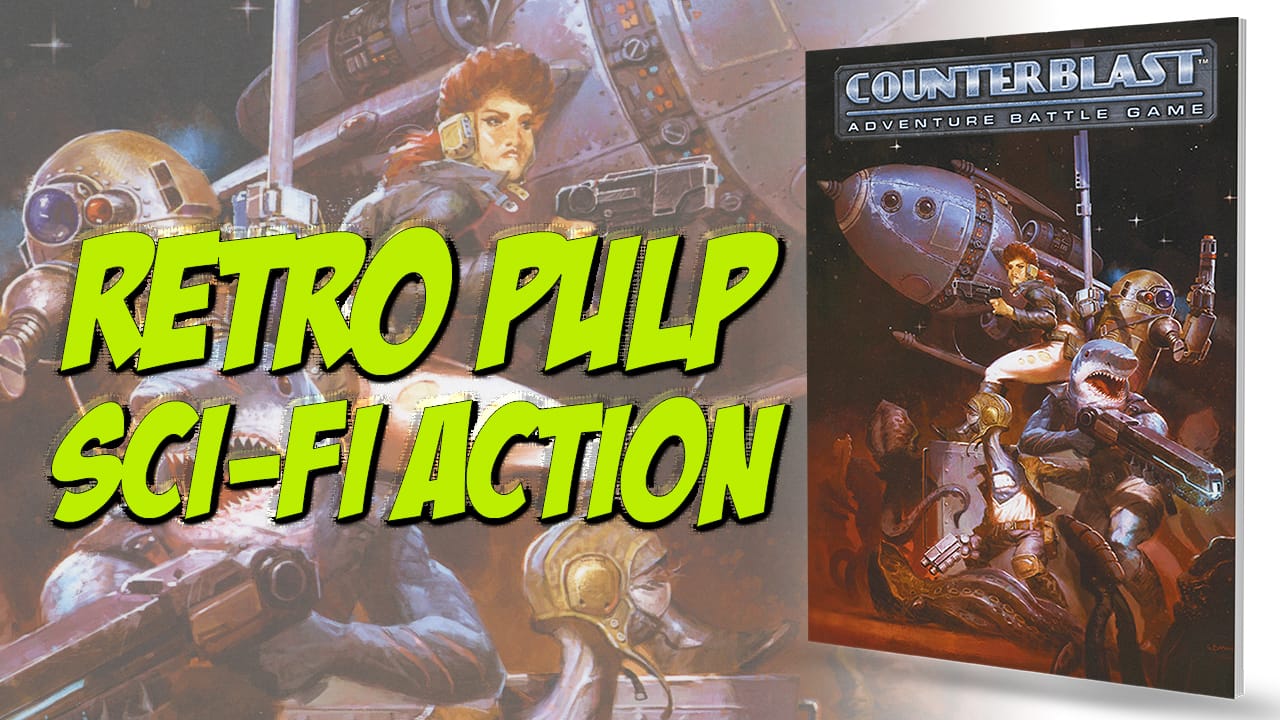 Bombshell Miniatures ran a successful Kickstarter campaign to re-launch their Counterblast pulp sci-fi rules in a second, enhanced edition.  This 194-page, hardback book is packed with rules, background information and great artwork that not only re-introduces the game universe but does so with some style.

The book begins with a useful introduction to the main aims of the game and an overview of the pulp sci-fi universe that underpins it. There’s also a guide to the basics needed to play and serves as a good entry point for those new to gaming.  This is followed by the main phases of a game turn, with a step by step approach to enable ease of learning. There are no examples offered to clarify points, and no summary to ease reference in-game. Each game is played out on a 3 ‘ x 4’ area, using only a few figures on various sized bases, each of which has a varied statline. The result of one or more D10 dice being rolled is used to determine outcomes, with a 10 on a D10 being counted as an ‘Exploding 10’, allowing the roll of additional dice to enhance the level of success across various actions.

During the course of a game, figures may become subject to a number of Conditions, which have an effect upon their capabilities. These are outlined in a suitable level of detail. Each model is considered a character and has a number of Model Features recorded on their statline. These also have an effect on what actions can and cannot be undertaken during a model’s activation.

A group of figures who work together is called a Crew, and players are allocated a points level for their creation. The higher the points, the longer the game may last. Crews need at least one Hero, which may be the Leader, and crews are defined by their affiliation to one of the factions in the game. These help to define access to the specialties that may be chosen by a crew affiliated to that faction. These are outlined by faction, whether core specific, a focus specialism and a general one. Some factions have access to Psionic powers, which are fully explained in the relevant section.

Terrain is clearly defined and described, with ‘groups’ of terrain, and how to destroy it. There are some generic ideas on vehicles, and a comprehensive section on Equipment which covers various types of weaponry, armour and more, including faction specific weaponry.

There are 8 gaming scenarios included in the main rules, which can be chosen or randomly rolled. These link across to the campaign section, which has a fair amount of depth without being prescriptive.

The remainder of the book outlines the main races and the history of the Counterblast galaxy. Full stats and points costs for each type of race and the various roles are included as fairly standard ‘army lists’ with some optional elements. These are very comprehensive, and also cover named characters from the game universe.

In addition to the main rulebook, a small, pocket-sized version of the basic rules is also available, which is designed for rapid usage and reference during gameplay. In addition, like all the best modern games, each type of figure has a handy ‘game reference’ card which has all the stats and other in-game information on the front and back.

This is a well laid out, easy to use rulebook with some great artwork and high production standards. I was a little surprised at the lack of game play examples or ‘end of section’ summaries however – these always help to clarify the rules and can be useful for new and experienced players alike. That said, the overall game system looks fun, and the depth of play is similar to an RPG without the sluggish elements. A great product, with plenty of scope for a whole host of adventures in a pulp sci-fi universe that never was.