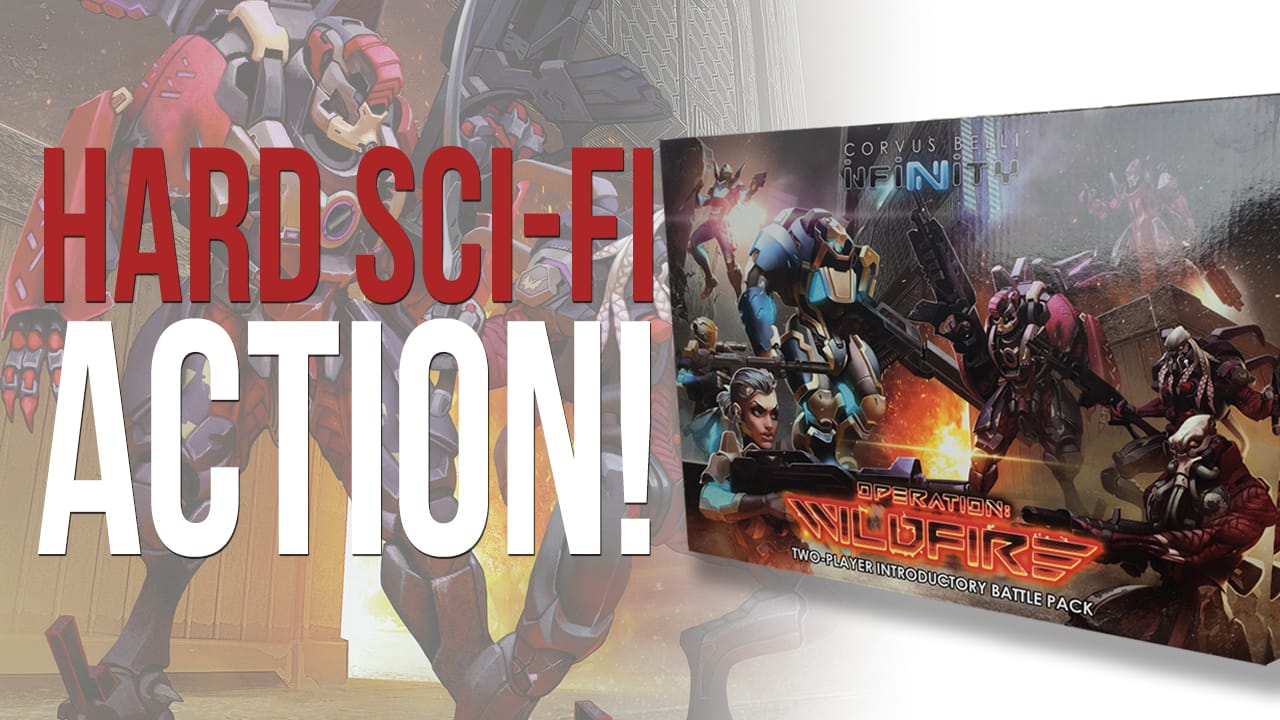 Corvus Belli have been creating rules and miniatures for their Infinity sci-fi background for a number of years. Along the way, they have offered expansions and starter box sets to enable current gamers to add to their gaming experiences and new gamers to access this fascinating gaming universe.

The Operation: Wildfire two-player introductory battle pack is one of a series of ‘complete games in a box’ from the company. It follows a familiar format, two opposing forces, rules and dice. A particularly nice touch in these sets are the sturdy scenery included, made from card.

Sliding the contents out of the box, we first come upon a softback rulebook. Its actually quite an unusual rulebook, in that it is bilingual, with 39-pages of content in Spanish and, by flipping the book over, 39-pages of content in English. The rulebook begins with an overview of the two factions included in the box set, including images of the figures. Overall, the rulebook is very well laid out, and incorporates a basic version of the core Infinity rules within each of the five ‘missions’ included. As you play through each of the mission scenarios, you learn a new facet of the rules, how to make best use of the different weapon types, the scenery provided, etc. It’s quite unusual for a rulebook to directly encourage you to ‘learn as you play’. Having learnt the basics, there are some advanced rules detailed, plus how to access the whole rulebook and accompanying markers for free from the Infinity website. However, the remainder of the book covers the majority of the Infinity Universe within its pages, including other factions, game supplements available and much more, including the preparation of the metal miniatures and how to paint them. A very comprehensive and rather clever way to introduce the game and its background universe.

Beneath this rulebook is a compartmented plastic tray, within which may be found the metal miniatures for each of the factions outlined. These are more ‘hard sci-fi’ than ‘grimdark’ and are highly detailed. Some assembly is required, and the relevant bases are included. There are also two sets of D20 dice, in different colours. Everything needed is here to play through each of the missions, with the figures also working as the basis of your two starter factions within the Infinity universe.

The next layer contains perhaps the items I am most familiar with and find most useful for gaming purposes. We have a punchboard full of tokens and templates for the game, produced on top quality thick card. Beneath that is a glossy paper playmat which represents the main setting for the missions, but it’s the next set of punchboards which are really the ‘stars’ for me. These are the pieces of the buildings and other scenery items which are assembled and used during the game. These are made from a sturdy card, but can be carried quite easily, and disassembled for storage.  Assembly instructions are included, but these are double-sided, full colour printed sections, which enables the gamer to get them straight onto the tabletop.

Amidst a veritable ‘sea’ of gaming starter sets, this is perhaps an example of how to ‘get it right’. The quantity and quality of gaming materials in this product are very well done, and the approach taken to ‘hook’ the gamer is both commercially sensible and of benefit to those looking for something new to entice them. Everything included in the starter set is designed to last, and can provide for hours of great gameplay even before you decide to make a new purchase. An excellent product, to be recommended to veteran and new gamers alike.