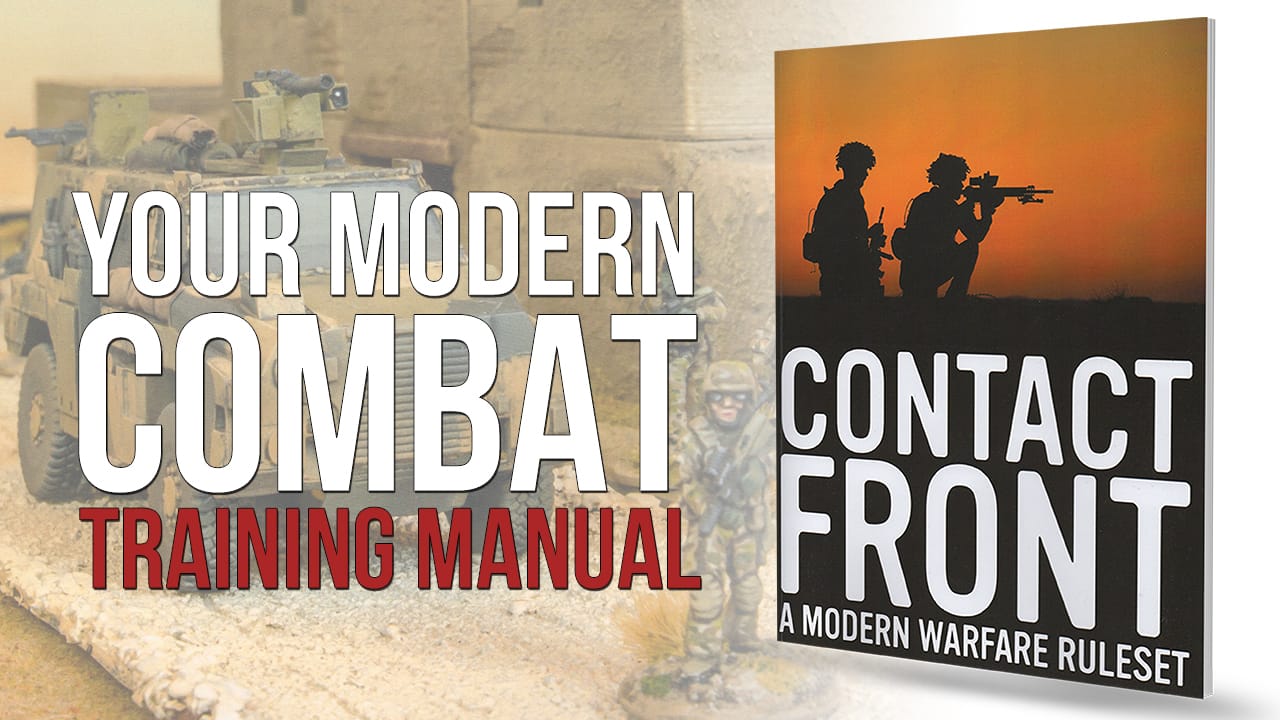 Godseye Games are a new company who have just released Contact Front, ‘modern warfare rules’. This is a 94-page softback book, which aims to “puts you in the shoes of the platoon commander, balancing mission objectives with the lives of those under your command”, with its main area of focus (and Army Lists) being for the 2001 – 2006 war in Afghanistan.

The rules use an IGO-UGO system and are designed for use with 15 to 28mm miniatures, with a figure ratio is 1:1, with a choice of fielding infantry forces at platoon and company level.

The rulebook begins with an outline of what is required to play and the basic concept behind the rules – players take on the role of a platoon or company commander ‘in training’, learning how to handle their troops under fire. Consequently, the main sections and sub-sections of the rules use bold type to offer words of wisdom, and plain type rules descriptions.

Figures and sections are activated using a mixture of command points and the number of Officers and NCOs. A series of charts are used to show not only ranges of weapons but how to call for support, react to certain situations and other factors within the combat environment.

The rules cover defining terrain and how it is used as cover.

A fairly detailed example of play is included, complete with a map.

An important part of modern warfare is the treatment of casualties, with rules for first aid to triage and the reactions of a unit to seeing colleagues hit.

Another part of the war in Afghanistan, and covered in the game, was the use of vehicles as transport and evacuation assets.

Optional rules are also offered, including the role of the Rules of Engagement used by Western and Coalition forces.

Brief but useful rules for the conduct of urban warfare, the role of IEDs, the artillery support options and the essential air support are all outlined, complete with the by now standard description, rules and charts.

The air support section is the most detailed, covering casualty evacuation, transport and the role of air support on the battlefield.

The rules for anti-aircraft fire are also quite comprehensive, with plenty of action and reaction charts.

Night fighting is also covered, as are rules for combatting Insurgents in terms of their actions and reactions during a game and their special rules.

The last rules sections show how to calculate the winners and losers using a Victory Points system, plus outlining special rules that may apply to different troop and transport types.

There are four main Army Lists for British, US, Taliban and Insurgent forces for the period covered. The lists cover the make-up of a force in terms of figures, plus the support options available for the different levels of organisation offered: platoon or company.

Players roll a D6 or D10 to find out how many support options they are allowed from the lists. Having outlined all that, generic missions are covered, with the aim of creating a narrative-led campaign rather than prescriptive scenarios.

The rules are well laid out and have a reasonable level of detail. The concept of this being a ‘training course’ is a little hackneyed, but will appeal to some. The rules themselves would perhaps have been better served without the ‘narrative voice’ to introduce each section, and the endless charts may enable quick results, but do appear to go on forever. However, these may well be aspects that other some gamers welcome, and it certainly seems like these rules will provide a detailed game for those looking to play out the minutia  of modern combat.