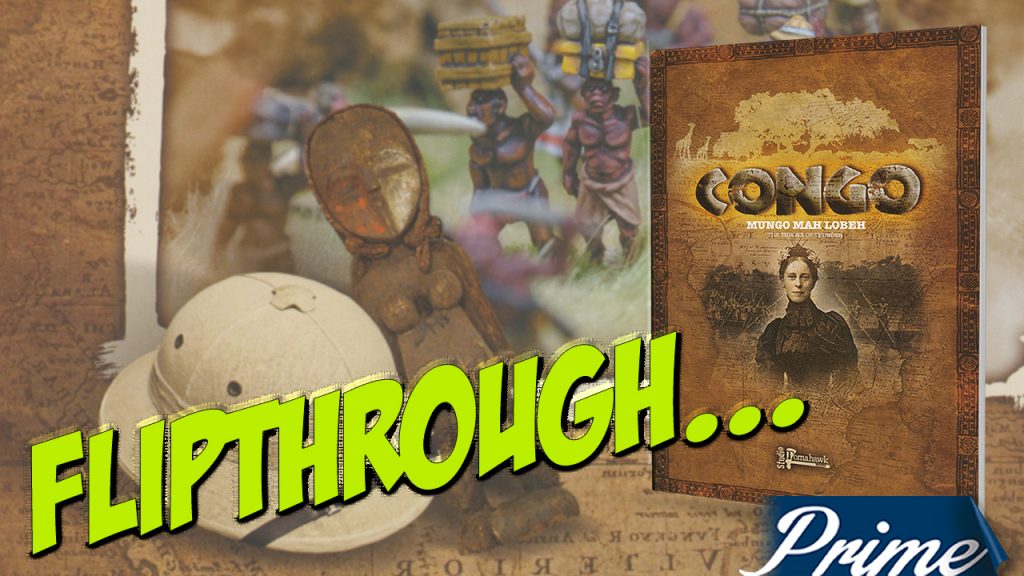 Mungo Mah Lobeh, the Throne of Thunder is a new campaign book for Studio Tomahawks Congo game. This supplement contains six scenarios designed for adventures in the Heart of Africa. It recreates the real-life journey of Mary Kingsley’s daring 1894 expedition, that ended with her column climbing Mount Cameroon.

Along with the campaign system and the adventures (which can be played individually outside of the context of the campaign), this supplement offers new characters, new animals, alternative dangerous terrain tables and optional rules.

The book comes with 2 figures designed exclusively for the supplement

The book begins by outlining the basic structure of the campaign, providing a brief historical overview and what is required to game the whole series of adventures.

There is more detail provided on page 10 and 11, showing the set up of Mary Kingsley’s expedition, and that of her adversary Ujuwa (you-jew-wa) and his tribesmen, in terms of the types of miniatures to be used. This includes the figures of the two leaders that come with the purchase of the book itself. There are several new rules that help to regulate aspects of the campaign, complete with tables. Each phase of the campaign is explained using the ‘pages’ taken from the Societe De La Bulletin Geo-graphique – the periodical style adventure guides which come with the game. These represent aspects that happen prior to the expeditions but act as aids to your adventuring.

Page 16 and 17 outline a number of these additional rules, including the limits on your Columns, new Discovery markers, and the use of the new ‘Travel Log’ for each of the lead characters.

An interesting aspect of these new rules and tables is the fact that the composition of your Column is directly affected by the events and the decisions you make, with some being removed as casualties, or new characters arriving.

Another aspect of these new rules is the emphasis placed upon the lead characters, both of whom have very different objectives. In the case of the tribal sorcerer Ujuwa, the whole issue of spells and sorcery are addressed. New rules for acquiring Knowledge during the campaign are included, plus how to record these on the Travel Logs included for each character.

Between adventures, the campaign continues, with tables being used to chart your progress, or lack thereof. Time is a crucial part of the campaign, with delays on either side leading to potential problems such as failing to achieve the objectives set for each character, or being beaten to the ‘end game’ by your adversary. The campaign ends with the ascent of Mount Cameroon, with the rules for whomever ‘wins’ being given in detail.

An Appendix provides information on; converting the ‘historical’ Columns into those contained in the core rules, information and game statistics for the two main characters, rules for animals, lone characters and gaining experience and the new subsidiary characters that can be encountered during the course of the campaign, all of which may be added to the adventures in the core rulebook.

There are also new Dangerous Terrain Tables, cards and markers to cut out and a double-sided map to chart the progress of each expedition.

This supplement provides Congo players with a wealth of new rules, adventures, encounters, characters and more, for use within a structured, finite campaign setting. Yet a key factor is that no two campaign experiences will ever be entirely the same, a hallmark of the adventures in the core rulebook. In addition, the fact that almost everything in this book can be adapted for use in other Congo games makes this a useful resource for anyone who enjoys the game.