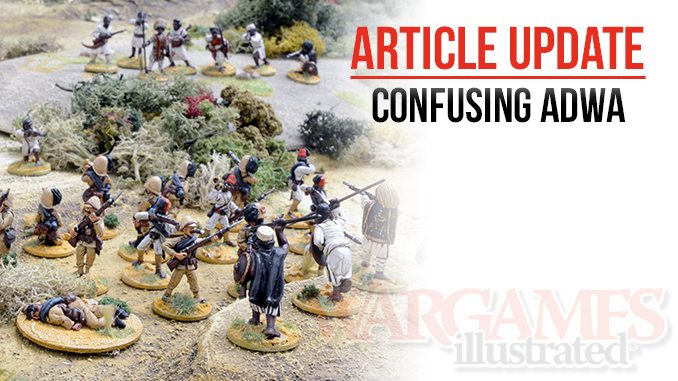 In the current issue of Wargames Illustrated we feature an article entitled ‘Between the Jaws of Hyenas’ which includes a deliberately confusing scenario based on The Battle of Adwa 1896. We got a little too confused and got some of the maps a bit muddled!

Below you will find the correct maps required for the scenario.

P.S. The maps in the Interactive version of the magazine were published correctly.

If you set up your tables as shown in Diagram 1 the players will instantly see their position in relation to the other two columns and quickly work out which hills are likely to be their objectives. They can see what they need to do to mutually support each other without the need for communication. They can also see from their God-like position above the battlefield that if Column A marches off the north-east corner of their table they will march onto the south-west corner of Column B’s board, whilst the commander of Column C will immediately recognise that he must simply hold the hill on his baseline and need not advance. In short, the players will have far more information than their historical counterparts ever would have, and they will not rely on intelligence or communication from their comrades to understand what needs to be done to achieve victory. A replay of the confusion of Adwa is unlikely.

Diagram 2 suggests a minor change that begins to introduce some confusion. All we have done here is push the boards so that they are now parallel to each other. Remember, Diagram 1 shows the true position. If Column A marches off the north east corner of their board they will still enter the south west corner of the board containing column B. However, by pushing the boards into a parallel position this will not now be immediately obvious to the players. They may all very well assume that they have made equal progress during the night march and are now marching parallel to each other, which will not be correct. You can see how, by making this small adjustment we have started to mess with the players’ heads. When the players are given messages by the umpire stating that they can hear firing coming from the north west, or east etc, this information will now appear confusing to the players as the direction of the firing will not marry up to where they can “see” their friendly columns to be.
However, this is where the wargamers low cunning will kick in. Once told he can hearing firing from the north east but he can see that the column directly east of him is engaging the enemy, the wargamer will no doubt quickly realise that the umpire is toying with him. After a couple of turns of confused faces, no doubt the players will quickly surmise where they actually are in relation to each other and act accordingly. The umpire will have momentarily foxed them, but not for long.

Diagram 3 shows a set up of boards guaranteed to keep your players guessing. Remember, Diagram 1 shows the true position. All we have done here is moved the boards around and placed them parallel to each other. As before, if column A marches off the north east corner of their board they will still march onto the south west corner of the board containing column B. This is where it gets a little tricky for the umpire who must now keep track of the various columns, especially when the fighting starts and he needs to hand messages giving the direction the firing is coming from.
The players might assume that the board set up represents the three columns as they are in relation to each other and that the three columns have made roughly the same progress during their night march. In fact, none of this will be as it appears.
You can see now that the when the centre column B first engages the enemy, the commander of Column A will be told the firing is coming from the north east whilst the commander of Column C will be told that the firing is coming from the south west. This will now be counter intuitive, and the player will not know whether to believe his eyes or the “intelligence” the umpire has just handed him. You can see that the player will now have to decide if the information is perhaps a false lead. Should he march to the sound of the guns or attempt to follow his orders?
There is an added element of confusion here that I think I should spell out. When the boards are placed parallel to each other, all the players will think that they need to take a hill somewhere in the centre of their board to achieve their objective. In truth this is only the case for column B. Column A will have to march to the very top of their board to achieve their objective whilst Column C are already next to theirs. However, as soon as the boards are placed in a parallel position I have no doubt the commander of Column C will immediately advance, despite what it says in his brief.