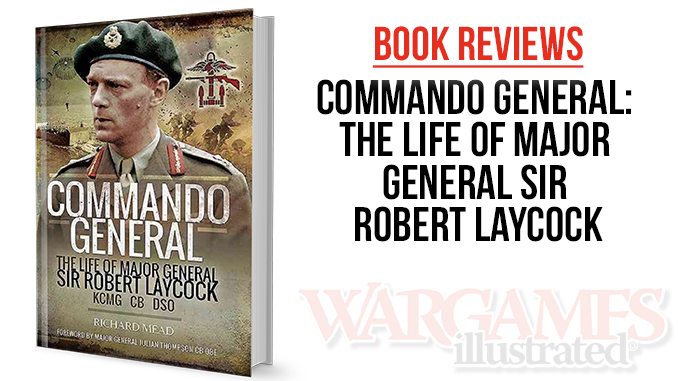 Major General Sir Robert Laycock KCMG CB DSO, known throughout this biography as Bob, is well remembered for his World War Two Service. He served as a staff officer in France then as the commander of Layforce, followed by Special Service Brigade in the Mediterranean, and finally Chief of Combined Operations. This is a biography of the man, however, rather than simply his service record writ large. Richard Mead takes us through his early life as the son of a Brigadier through to his peacetime role as Governor of Malta and his untimely death at the reasonably young age of 60. There are 240 pages, of which 23 are given over to notes, index and bibliography in a hardback format.

Commando General is very easy to read and nicely structured. The chapters of the life of Bob are neatly constructed into a sometimes compelling narrative. Some moments and lines stand out like the one regarding Bob meeting his wife, Angie, with the comment “She did not ride, but he was nevertheless attracted to her”. This style of understatement runs throughout the book. The descriptions of the fighting Bob was involved in are well handled. The chapter on Crete is very well done and covers his withdrawal from the island with commendable neutrality. The coverage of Layforce itself is also handled with an objectivity that does the author no small amount of credit.

There is one issue with objectivity, however; it can lead to a lack of opinion or critical analysis, and there is a slight feel of that about the book. Mead does not generally comment on whether decisions made by Bob are right or wrong. The action also lacks some substance, it is mainly a statement on what happened overall with little of the detail we wargamers like to see. Even where Bob was missing in the desert for 41 days after the unsuccessful “Rommel Raid” is given less than a page although the small anecdote about the tribesman is a nice touch. The “Rommel Raid” itself, correctly Operation Flipper, is covered in under three pages. As a failed raid it could do with a bit more analysis of why it went wrong, it is this type of critical analysis that is missing from the book as a whole.

I enjoyed reading this book and there are many actions mentioned that warrant further exploration. The lack of detail means they will need further research to be useful as scenarios. That said I do foresee a nice mini-campaign based around Layforce defending the perimeter at Crete being interesting, as it is lightly-armed commandos against more heavily-armed airborne troops who have reinforcements and air support. As there is a new Ironfist Publishing Battlegroup supplement which covers Crete, Battlegroup Tobruk, I think I might look at those. This is a good book that will lead you down many rabbit holes looking for more detail on the actions mentioned and you do have the chance to make up your own mind about Bob.