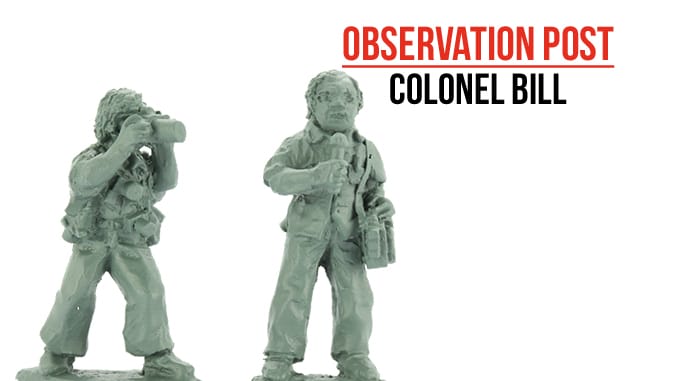 Colonel Bill Miniatures have produced a pack of figures that will prove useful to those gamers looking to populate their gaming table with a sight typical of the Vietnam War, the TV news crew.

In this most visual war, the TV news crews were often alongside the troops, reporting from the frontline and beaming their films direct to the world. Many a family would wake up to view images recorded only a few hours ago or beamed live into their living rooms in time for breakfast.

This is a pack of two 28mm figures, one with a microphone and the other with a large handheld TV camera. The two would make a nice vignette, with the reporter standing in front of the camera as he makes his report. They could also be used as scenario objectives or similar, acting as VIPs to be protected or a complication during the course of a firefight.

Each of these figures is fairly ‘chunky’ and well sculpted, with enough detail to make the job of painting the figures that much easier. They would fit with most of the ranges currently available and, indeed, in a host of other 1960s – 1980s set games.