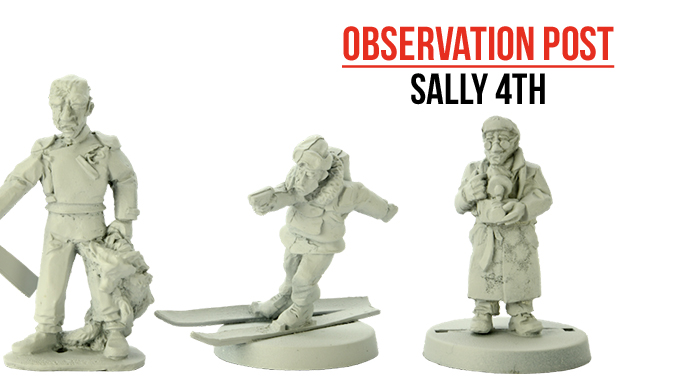 Sally 4th recently released Whiteout: The Arctic Survival Game which featured in a previous Primetime as a flipthrough.  In order to support the new rules, the company has added to their 28mm Classic Movie Miniatures range with packs of figures that match some of the images and reference points mentioned in the rules.

The Arctic Flyers and 1950s Thing are based upon characters from the 1951 movie The Thing From Another World. The crew of a USAF aircraft land at a scientific base in the arctic, only to find the scientists and base are being menaced by a lone alien, survivor of a crashed spacecraft.

Ski Pursuit bears more than a passing resemblance to a key scene from a classic ‘Spy-Fi’ movie, a Roger Moore-style Bond in The Spy Who Loved Me. Skis, rifle-armed enemy minions and a lone skier with pistol and backpack are all included.

1980’s Thing (see below) is pretty much based upon the movie The Thing, released in 1982 and starring a young Kurt Russell. Again, a scientific base is attacked by an alien creature, but this parasitic creature is much more horrific, infecting and changing the DNA of the scientists as it attempts to survive.

Lastly, we have the Crashed Spy Camera, cast in resin with twin parachutes and a downed satellite, each piece being separate to one another.

With the exception of the last pack, these are all cast in metal. The sculpts are really characterful and evocative of the subject matter, a little on the large side compared to some 28’s but ‘fitting together’ nicely. My favourite is, of course, the 1980’s Thing, which requires some assembly but looks great even when just undercoated.

The back of some of the models

For more information, visit Sally 4th at www.wargamesbuildings.co.uk  and check out these ands other packs in the range.