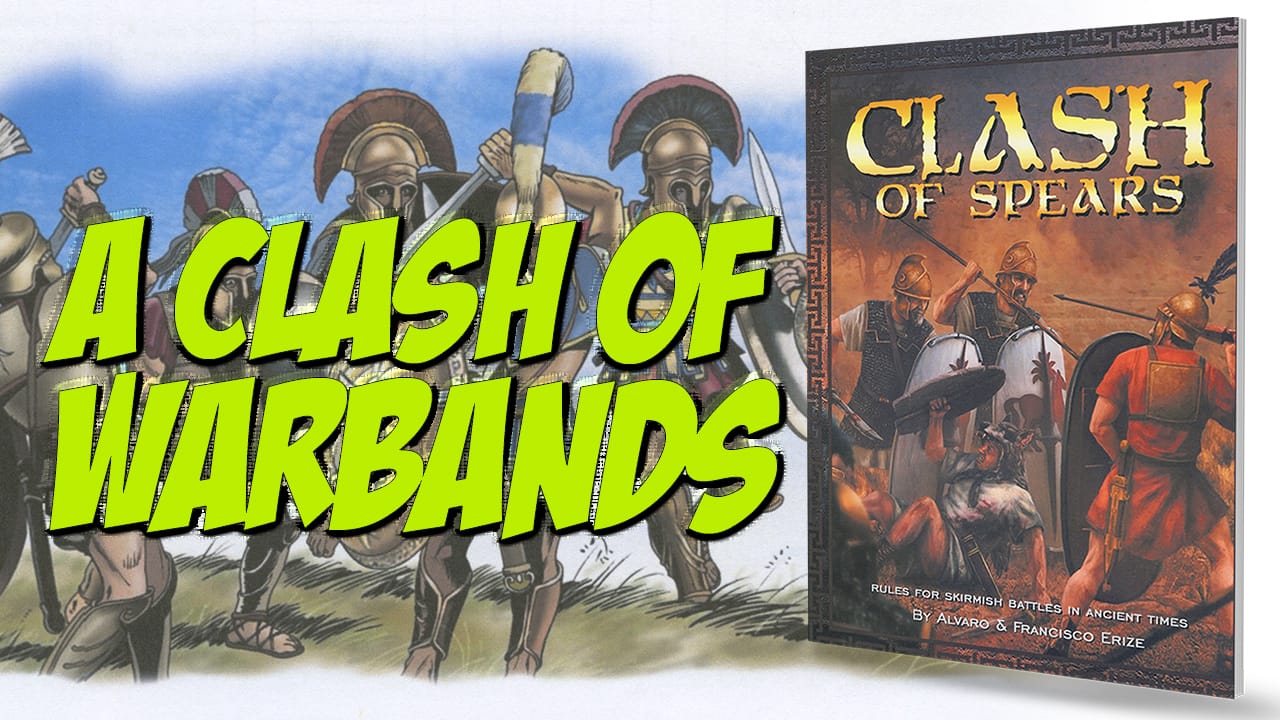 Clash of Spears is a 101-page hardback book which contains rules for running skirmish battles with an ancient era focus. It is a self-published set of rules, that is not only very professionally produced but is also very ‘gamer friendly’.

The book begins with a useful introduction to the aims of the rules and an insight into the design concepts. This is a game where between 30 – 40 figures are part of a Warband, a sub-section of ‘rank and file’ troops from a much larger army. They undertake missions, scout ahead or fight on the edges of a battle, led by superior leaders or heroes. Units are able to use a number of different formations, dependent upon unit type and training. Every step of the way, rules points are followed by pictorial examples, and each section is summarized with a bullet pointed list.

There are two main factors to the rules: the role of leaders, the commander’s overall quality being a key motivator for even the most well trained troops, and the role of Fatigue upon the Morale of the troops, who may be in a fight but perhaps don’t want to stay within it. This is an unashamedly D6-based system, with modifiers being applied to the die score. All aspects of the battlefield are well defined, saving on some of the inevitable ‘discussions’. Again, the examples offered are excellent, arguably an ‘industry standard’ these days but not always present in rules from even some of the larger companies. Morale and fatigue are dealt with at some length, but the system is simple to use.

The basic turn sequence is outlined, again simply and with plenty of examples. The rules revolve around using command points to activate units, with one player taking the role of the active and the other the reactive player. This is an IGOUGO system, with some options for the reactive player to act before the active player – no one is a ‘passive participant’ during a game turn. Each unit may perform up to three actions in a turn, all of which are outlined and explained. Leaders or characters may perform their own actions in addition to these.

The Soldiers and War Gear section covers pretty much every possible weapon from the ancient period, sometimes as a generic item but also with named examples where necessary. The Traits section covers those extra areas beyond the basic stats for each type of warrior: these reflect the overall level of training for that particular type of warrior, allowing units to more accurately reflect the performance of their real-life counterparts. A nice touch is the Disposition Traits – you may be good with a sword, but if you’re Fearsome and a Cutthroat, the enemy may run before you get a chance to use it!

The Fighting a battle section acts as prelude to the 3 main scenarios provided to help run ‘pick-up games’, the instant games everyone needs during a gaming session. Points to note here are the use of deployment markers, with the reality of your Warband revealed as you close with the enemy. In essence, this section functions as a way to play and resolve your games, whether pick-up fun or perhaps tournament level, with a force break test and the use of victory conditions being important elements.

The remainder of the book offers two methods of creating a Warband, ‘mustered’, picked from a basic army list, or ‘ad hoc’, created for a particular mission. Allies and Mercenaries from other lists are possible additions to these forces, offering some additional flexibility.  There are 7 army lists on offer, covering the Western Mediterranean from the 4th to the 1st Century BC. All are well laid out and easy to use.

This is a rulebook created by gamers for gamers. It picks up the best aspects of how modern wargames rules work but goes further than many rulesets: the level of support and overall layout is excellent. What the gamer is left with is a highly accessible, useful set of rules that read well and not doubt work very well. The fact that there are also some nice layout touches and artwork is an added bonus. For a self-published rulebook, this stands nicely alongside many of the rules systems offered by far larger companies.