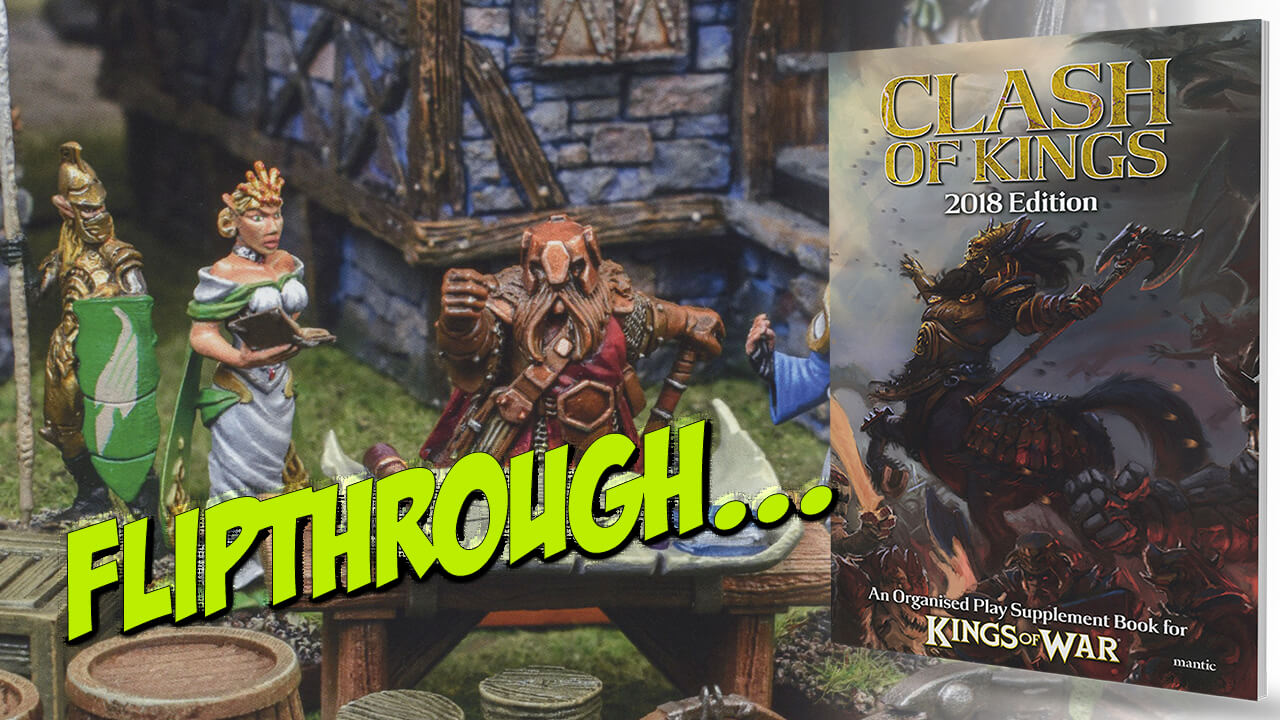 The new Clash of Kings: 2018 Edition is billed as an ‘organised play supplement’ for the popular Kings of War fantasy battle game from Mantic Games. In addition to relating the results of Summer Campaign of 2017, there are new rules and fairly detailed general advice regarding running tournaments. There is also a set of Battlefield Cards designed to support the game and aid in scenario creation.

The book begins with a narrative overview of the results of the 2017 Summer Campaign run on a global level by Mantic Games. The battle against the incursion by the hellish minions of the Abyss saw major changes to Mantica, the game world, as evidenced by the map shown. This campaign was also used as the springboard to create new rules for the game and led to some useful thinking on the world of tournaments.

The Tournament Guide section is perhaps the most useful for Kings of War and gamers using other rules in general. Essentially, this is a detailed guide to the creation and running of tournaments, from setting them up, the various styles, the use of clocks, the Swiss system and how to calculate the winner. If you play in or run tournaments, you may be aware of some of these ideas but if you are thinking of signing up for one for the first time or creating your own tournament, this is a really useful and welcome guide.

A number of new rules for gaming with post-campaign armies are to be found in this supplement. Every single army in the Kings of War ‘universe’ has been changed in terms of individual units, characters and more. In some cases, units have increased their stats or gained new abilities, whilst others have seen a decrease in their capabilities or have lost key characteristics.

One major change which came out of the 2017 Edge of the Abyss campaign was the use of Formations. This rule has now been adapted for use by every race in the game. Basically, a Formation is a set number and type of units that, when taken together as a Formation, grants every unit access to special rules or abilities. These Formations are listed under a series of headings and come complete with the number of units in each, their points cost and the rules that apply. This is also a handy way to build an army, making the standard, easy to use army lists even easier to use.

For those looking for new units and models to add to their armies, there are a number of additions for some of the most popular. Cavalry, foot, war machines and characters are all here, complete with their stats, points costs and all the relevant rules for their use. These are all units which first appeared during the campaign and have now been added to the ‘mainstream’.

There are also details on new Artefacts, Spells and Scenarios that were added to the game as a consequence of the campaign, again with full rules, points cost, detailed descriptions and, interestingly, rules for using the scenarios on a variety of different sized set-ups and the methods of calculating relevant victory points, again pretty much a complete guide to how to get the best from the scenarios on offer.

Talking of scenarios, released at the same time as the book is a deck of Battlefield Cards, which is designed for use for those wishing to create a more random approach to game scenarios. Full instructions are included for their use but, basically, players pick randomly from three distinct sets of cards, entitled Objective, Strategy and Condition, and use these to formulate their own personal gaming scenario. Players need to have their own deck of cards to do this, meaning it is possible for each player to end up with the same ‘mission’. These are not only useful for Kings of War but could be adapted for other rules systems.

This supplement does an great job of covering the changes wrought by last year’s campaign, plus offering new rules, units and ways to play within the Kings of War game setting. However, the ideas for tournaments, the quality of the production, scenario ideas and the battlefield cards can also be used with other games systems and provide a ‘bonus’ of sorts for those looking for general guidance.