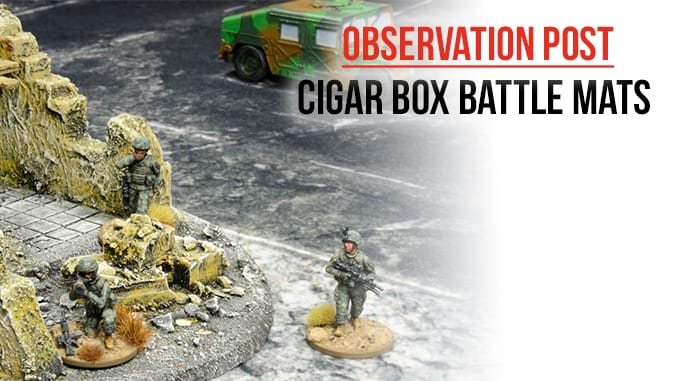 We’ve been massive fans of the Cigar Box Battle Mats ever since we first came across them. It’s been a while since we reviewed any of them but we’ve just recently taken delivery of two great ones, both of which have a Post Apocalyptic world feel.

The first mat is called New Desert and is a 60” x 80” piece of desert with 2D areas of rocky areas, broken looking areas that could potentially be concealing quicksand and a largely open area.

The second mat is also around 5’ by 6’, and entitled City Fight. This has a very modern looking series of roads on it, which have obviously been severely damaged by heavy combat. There are also rubble strewn areas which were perhaps once homes and shops.

Both mats are made from what is known as Polar Fleece, light enough to fold very easily but heavy enough to lie flat on a table or over suitable terrain placed beneath it. They are large enough to suit a variety of scales, and could be folded over or divided in some way to create much smaller playing areas. Although they are 2D, they really are of great benefit as the base for buildings and terrain. The texture of the fleece pretty much ensures that anything placed beneath or on top of them won’t slip around too much, if at all. Also, all of the Cigar Box Battle Mats are extremely ‘photogenic’, especially when dressed with 3D terrain and miniatures, which is really useful for anyone taking photographs or filming.

The whole range of mats is available direct from Cigar Box’s webstore or from European stockists like North Star in the UK. They are a sound investment which is pretty hard wearing and makes club and convention gaming much more cost effective. They also mean that you don’t have to lug around a whole bunch of terrain boards and just ‘lay to play’.