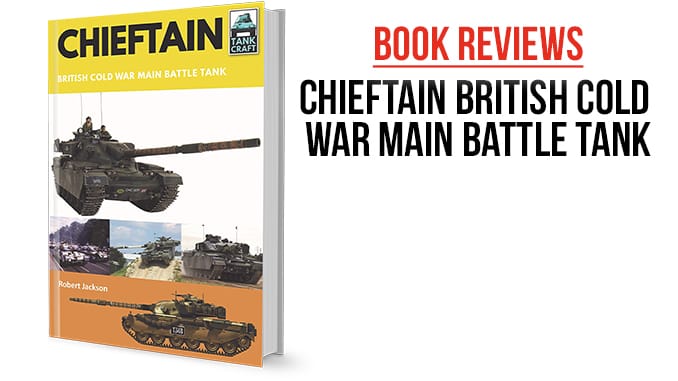 The Chieftain tank is synonymous with the United Kingdom’s participation in the Cold War as a member of NATO. In Chieftain British Cold War Main Battle Tank, part of Pen & Sword’s Tank Craft series, tank expert Robert Jackson delivers a brief but illuminating survey on this seminal British tank.

Jackson opens with the need to develop a post-WWII battle tank, and quickly, in the face of the emerging Soviet threat. With that in mind, the British began designing the Chieftain in 1951 to upgrade the Centurion with a 120mm gun. Jackson walks his readers through the technical information on the gun and powerplant with all its foibles. After various hiccups, the new tank was ready for production in 1963, entering service shortly afterwards. Jackson then provides a detailed guided tour of the Chieftain through its various compartments, and describes the variants of the tank, including engineering types. The Chieftain proved itself as a first-class main battle tank and saw service from 1965 to 1996: the British deployed 900 of them over that period, but middle-eastern nations bought and used them too. Jackson also considers the tanks the NATO allies used instead of the Chieftain, an interesting albeit unnecessary inclusion, and a more relevant survey of those tanks belonging to NATO’s adversaries. The irony of the Cold War was that it involved a lot of combat, just not the ‘big one’ that everyone feared. Jackson highlights what could have happened, arguing the Chieftain was the best tank on the potential European battlefield for much of its service. Chieftains were used elsewhere, most notably in the Iran-Iraq War of the 1980s and the Iraqi invasion of Kuwait in 1991. Developments of the Chieftain were also deployed by the Indian army against Pakistan in 1971, and in Africa by the Kenyans and Nigerians. The Chieftain finally gave way to the Challenger and is now found in museums and as forlorn targets on army firing ranges. In addition to the text, Jackson inserts a series of colour plates, showing the different camouflage schemes used for Chieftains, and a section showcasing superb completed models of the tank alongside some of the model manufacturers.

The modelling section of Chieftain British Cold War Main Battle Tank is the highlight of Jackson’s book, which after all is intended for military modellers, but the descriptions of the tank and its use are intrinsically interesting for general military history readers. I would have liked more on its use in combat, but that is to quibble with the purpose of this book. For Cold War enthusiasts and tank aficionados, Jackson’s work will be a welcome addition to their collection.