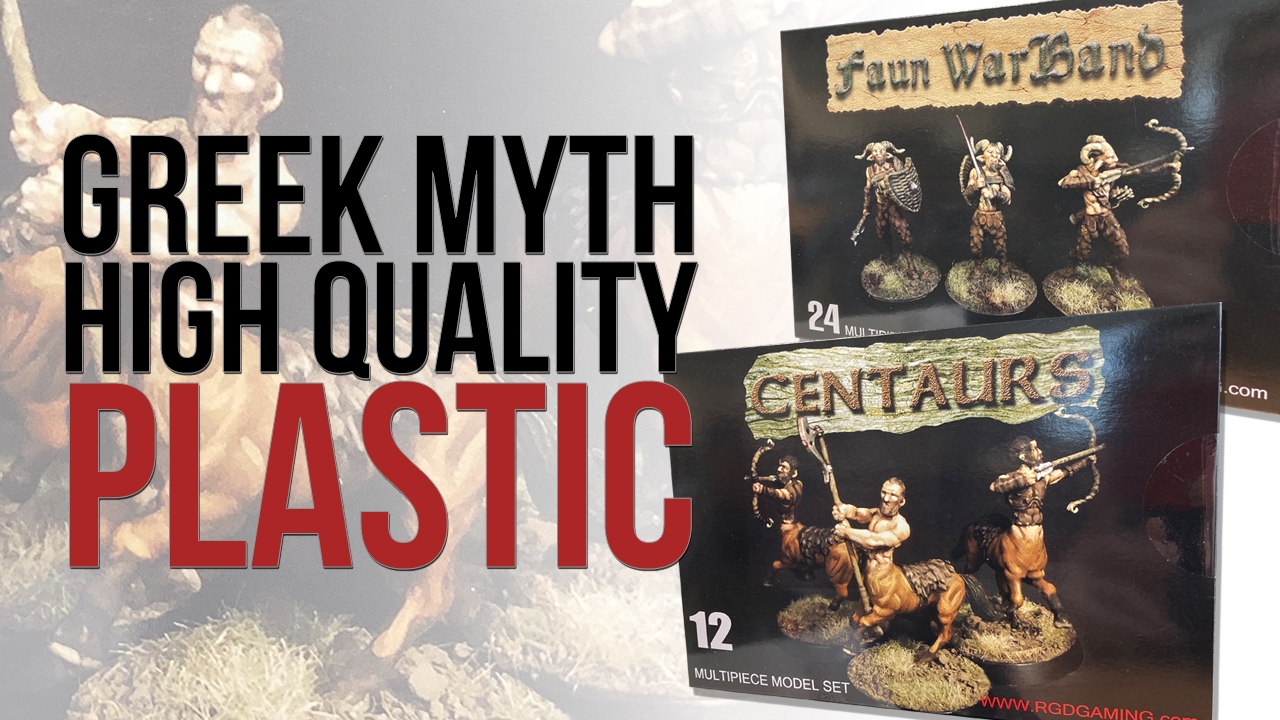 RGD have been around as an online retailer since 2008, but this these plastic mythical creature box sets appears to be their first independently produced miniature range, which has come about as part of a successful Kickstarter.

The Faun Warband box contains eight plastic sprues, four identical male frames and four female. This took my by surprise to begin with, as it would have been very easy for RGD to simply produce male sprues and put eight in each box. Given that the most expensive part of producing plastic miniatures, so I am told, is the creation of the master mould, choosing to put a mix in a boxed set like this is a brave decision, but one I hope pays off. Each sprue gives you options for three fauns, making 24 completed models.

The female sprue has three sets of legs, three torsos, a choice of six heads and six left arms, one of which is holding a bow and one a horn, to create the all-important musician. The right arm weapon options include four spears and four different hand weapons. There is also a quiver, to complete your bow armed warrior and a bundle of extra spears or javelins to be carried on the back of a skirmisher. There are two shields, one oval and one crescent shaped. The oval shield is cast with a flat face, and so would be suitable for transfers or decals, whilst the crescent shaped shield has a wicker pattern, which is deep enough to allow the use of a wash to show off the detail. Finally, there are three pieces of shoulder armour, or pauldrons I think they are called, to add some extra detail should you wish to do so. The male sprue is almost exactly the same except for male torsos and heads, obviously. However, you do get two heart shaped wicker shields and a right arm holding an arrow, so that your archer from this frame could be modelled in a firing pose. I have not tried, but no doubt the arms from the male and female frames are interchangeable. Overall, I really liked these miniatures. The detailing on the “hairy” legs and muscular torsos will reward the use of washes or even contrast paints whilst all the heads have detailed and expressive faces that add real character to the miniatures.

The Centaur box contains six identical sprues each of which will make two Centaur warriors, giving you 12 in total.  Each frame contains two “horse’ lower bodies, which are cast in half so you can interchange the poses to provide four different poses. There are six torsos, four male and two female, and four heads, again, two male and two female. There are also two tails for the horse bodies and a piece of armour for the torso, should you wish to give them an extra bit of protection. The muscle tone on the horse body parts is really well done and the faces nicely rendered, to the point that I don’t think the painted miniatures photographed for the box art actually does them justice. Finally, there are nine different arms, wielding a variety of hand weapons in both left and right hands, as well as some spare weapons which could no doubt be carried by your centaurs “just in case.”

Interestingly, on their website RGD show a painted Centaur firing a bow and yet I do not see a bow option on the sprue. This leads me to believe that all the parts from the two boxes are interchangeable, allowing you to mix and match arms and heads to provide a huge amount of variety in your force. At the moment, RGD are giving away a free Centaur sprue in the Fauns Boxed set and two Faun sprues in the Centaurs set, which I assume is to show you not only what the other set looks like but also to demonstrate how interchangeable the parts are. This is a great idea and kudos to RGD for pursuing it.

In terms of size, RGD have a size comparison online showing their sculpts alongside Fireforge, Mortal Gods and Warhammer miniatures, and they appear to match in nicely. I would be wary of mixing these Centaurs with Footsore’s “Mortal Gods: Mythic” range, as Footsore’s Centaurs are very chunky beasts. Perhaps use these as your warband and Footsores as your Heroes? Overall, if you are thinking of creating a “Woodland’ themed army for “Oathmark”, “Mortal Gods: Mythic” or just for your RPG games, these boxes are well worth a look.